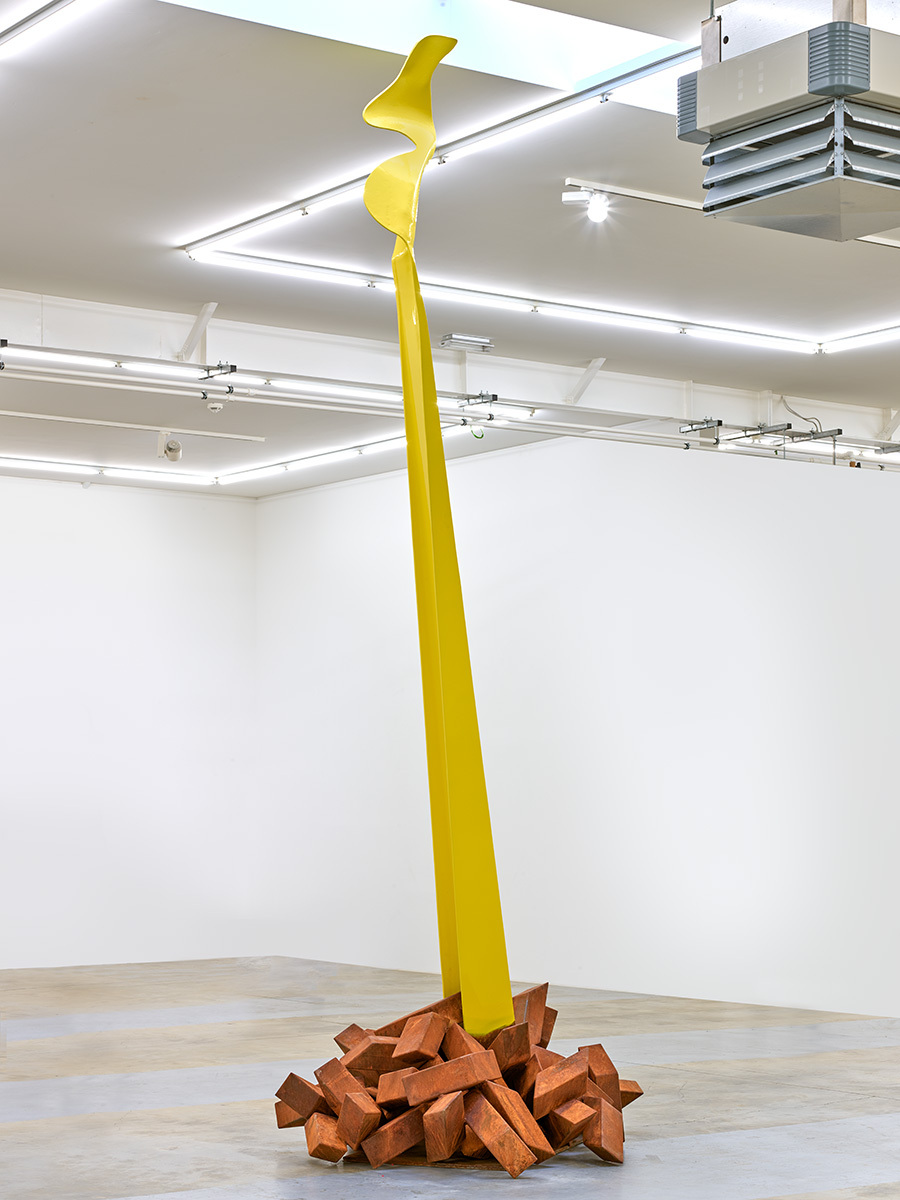 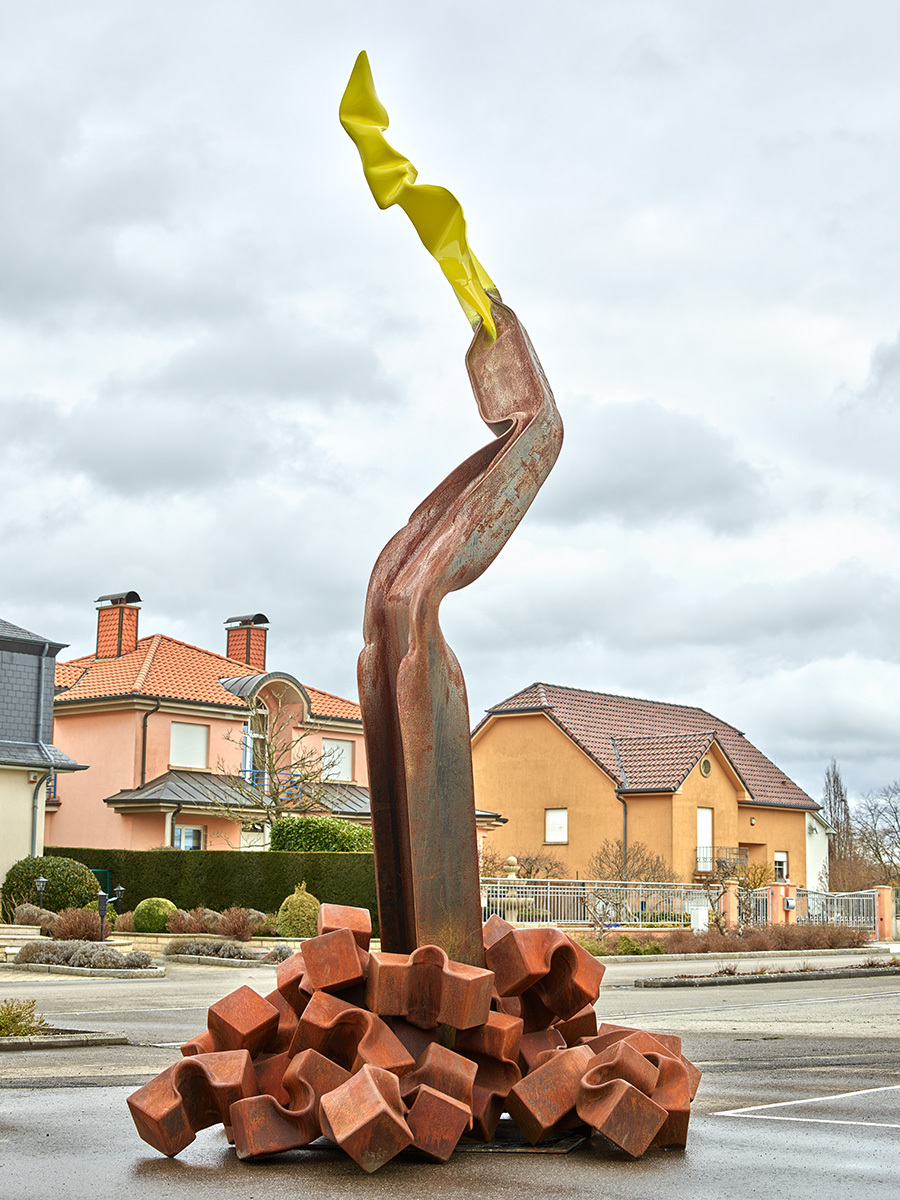 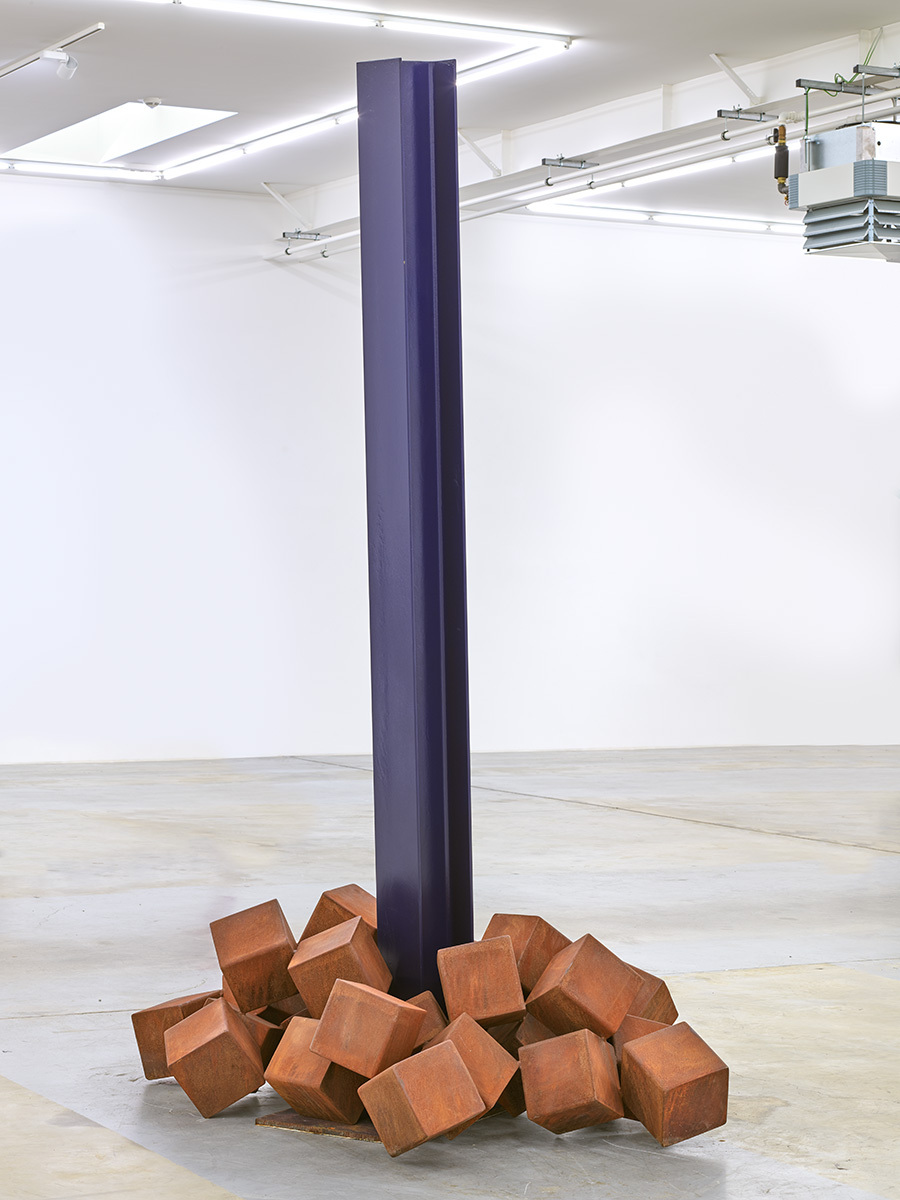 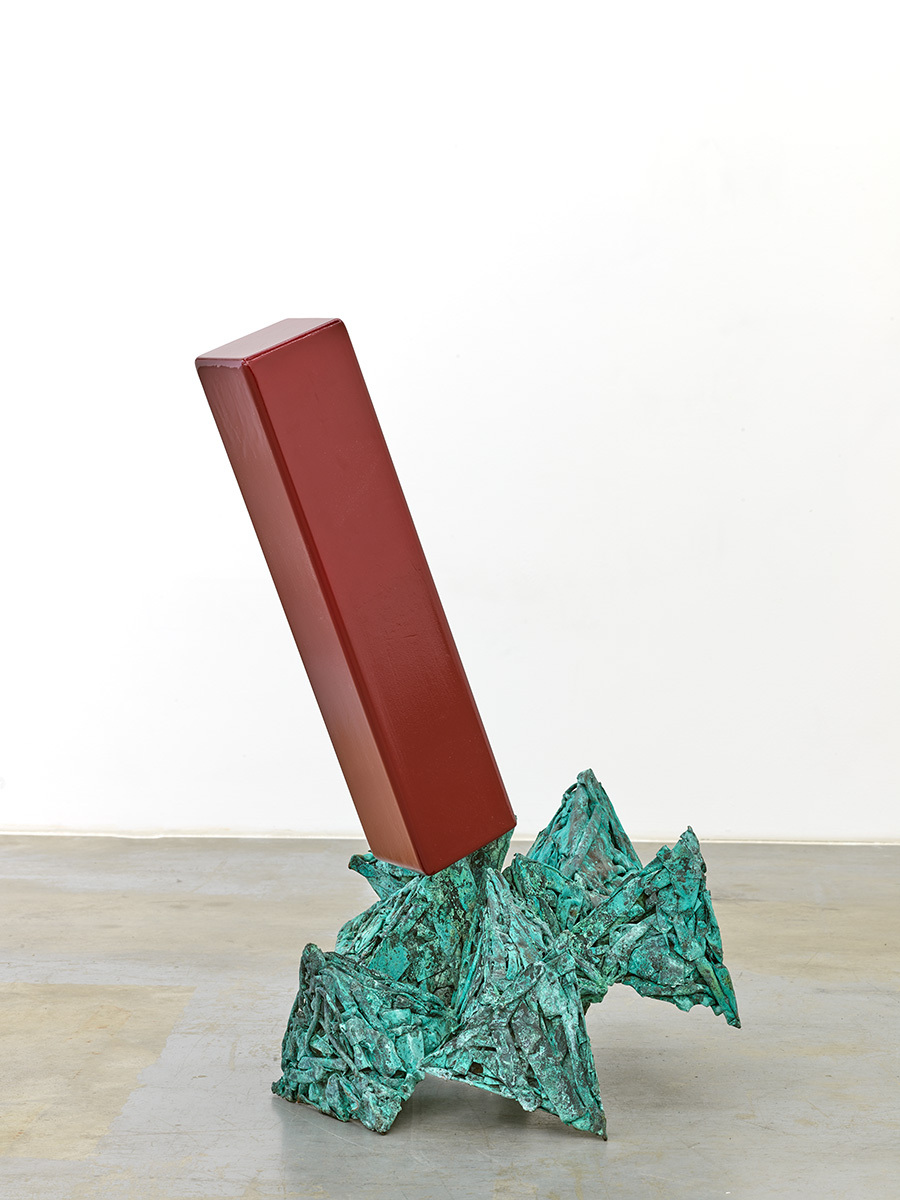 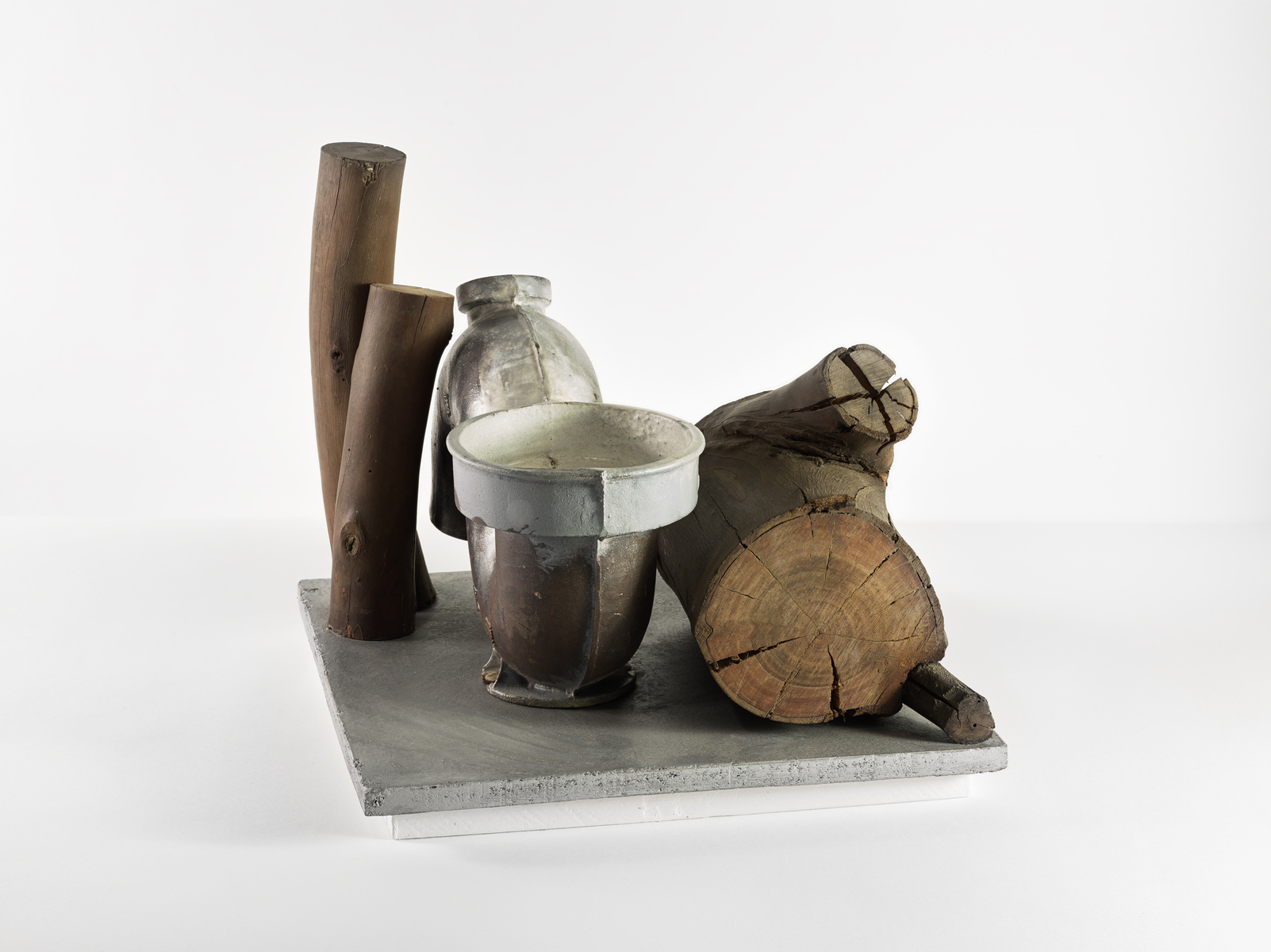 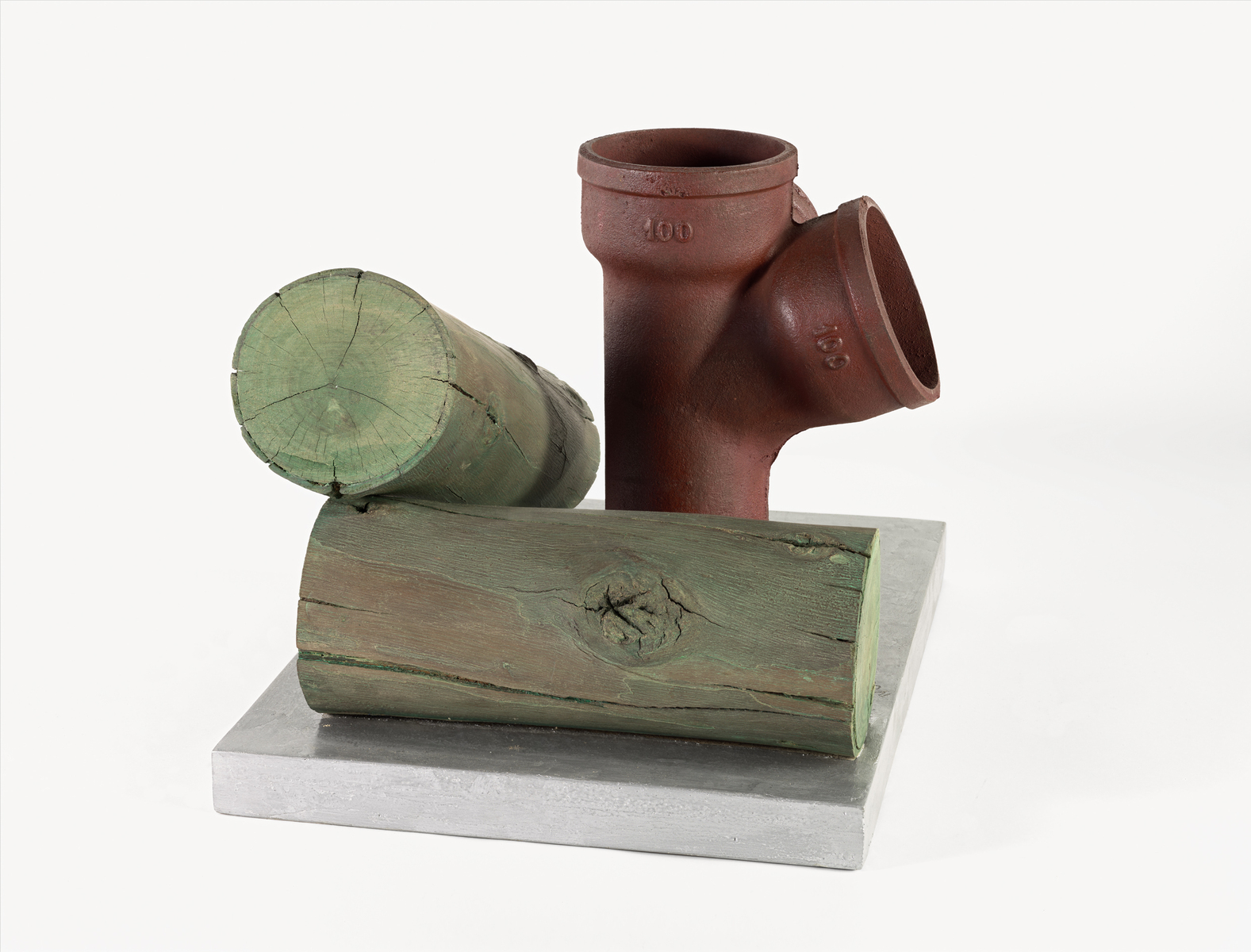 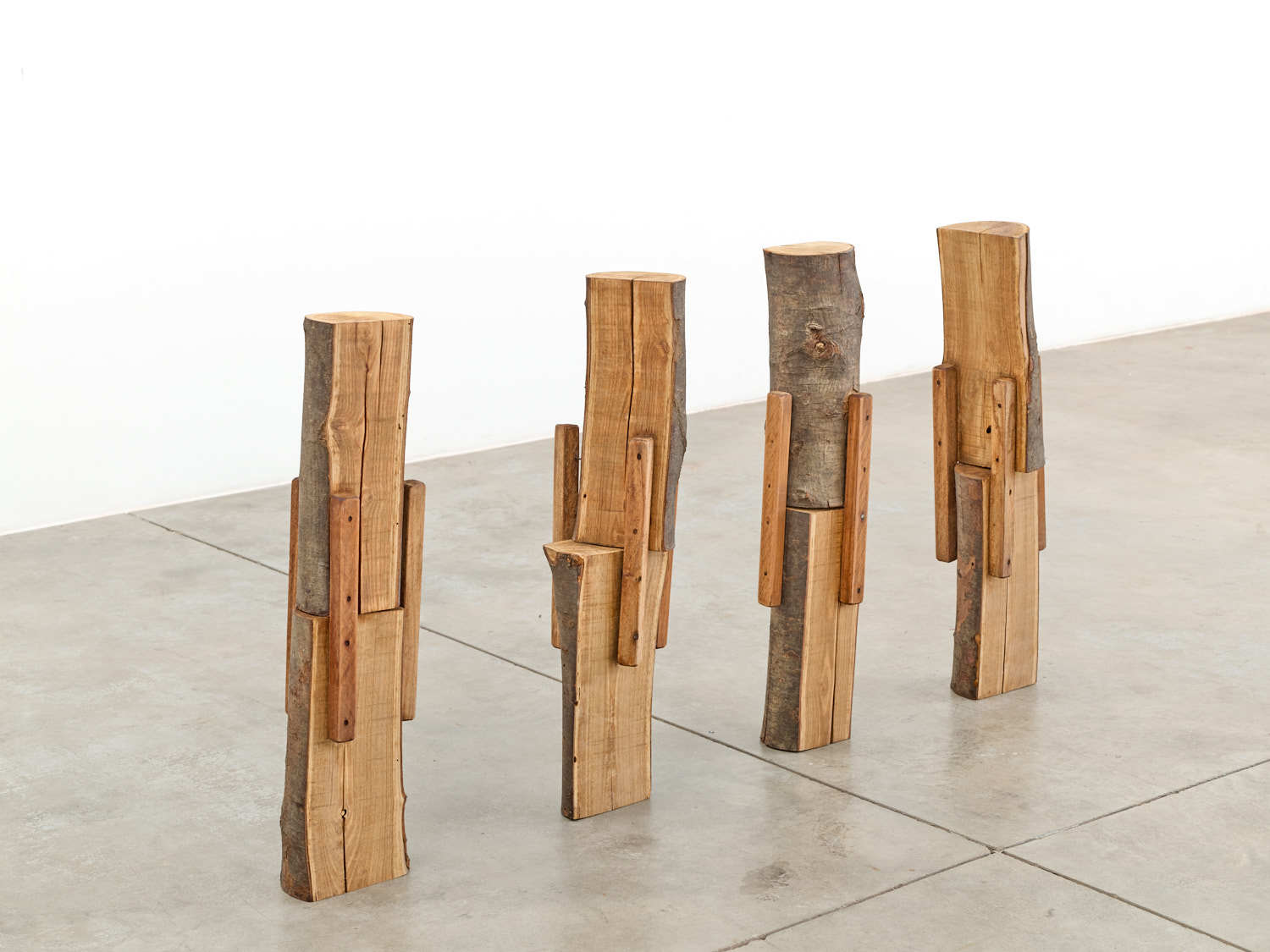 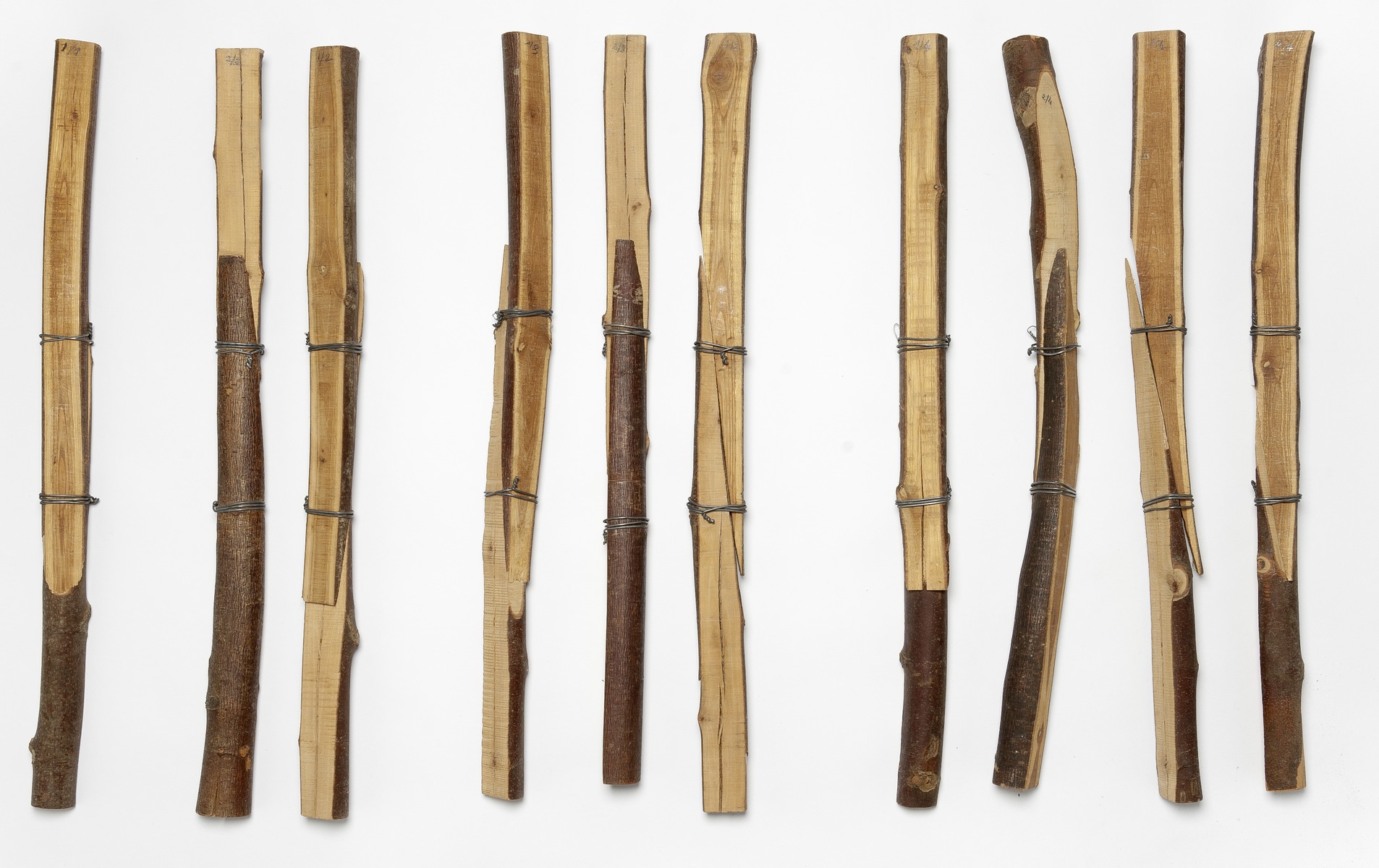 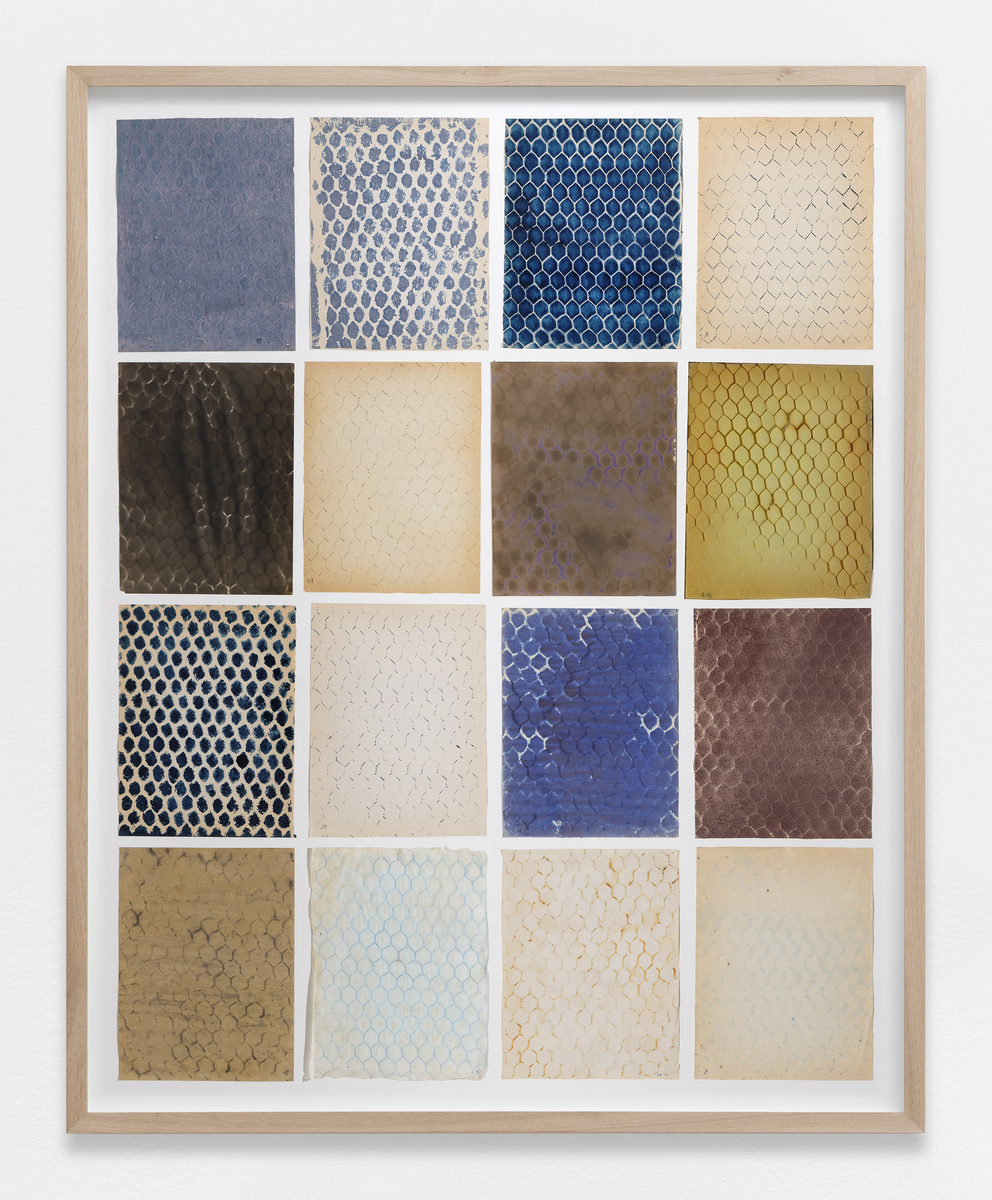 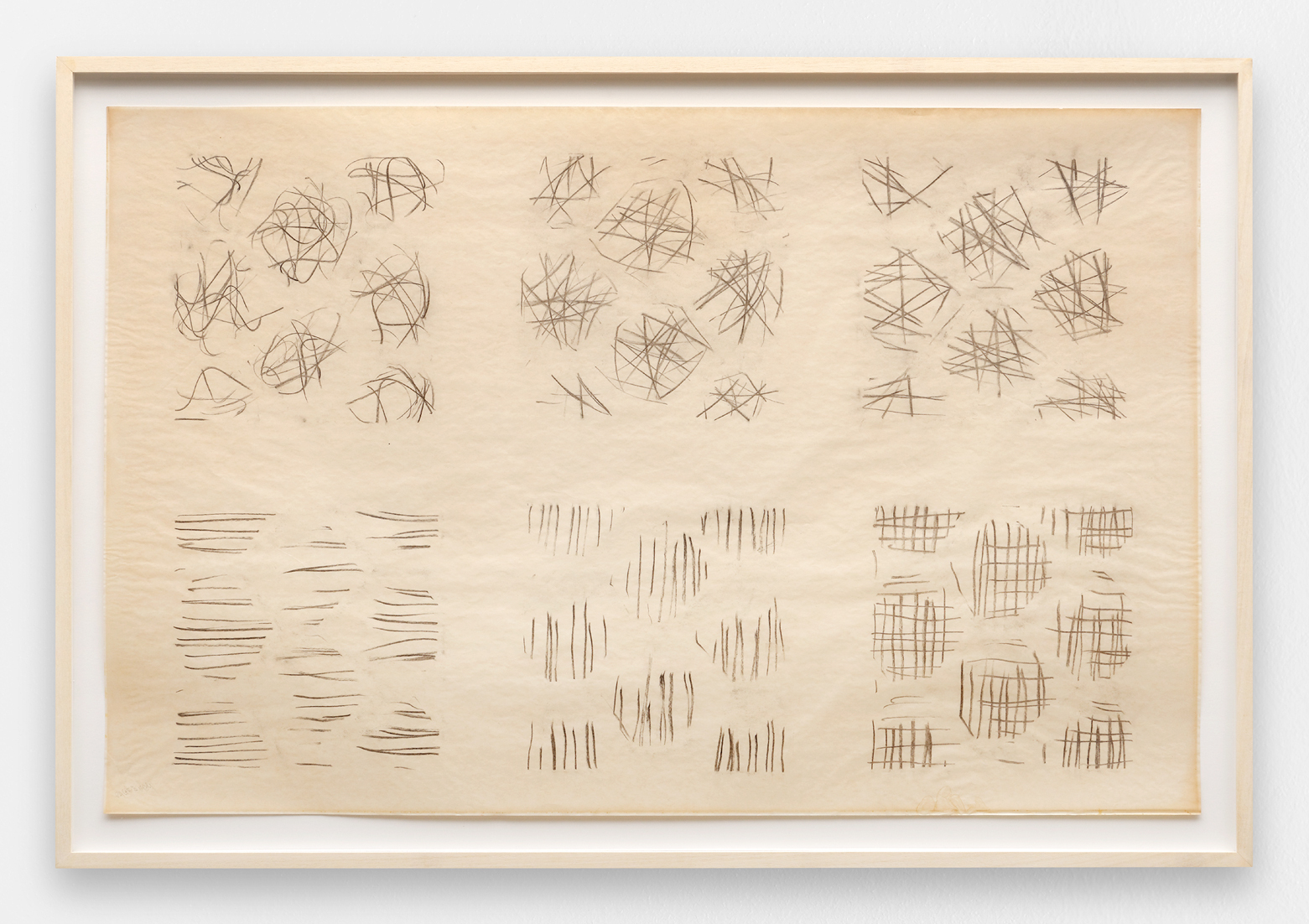 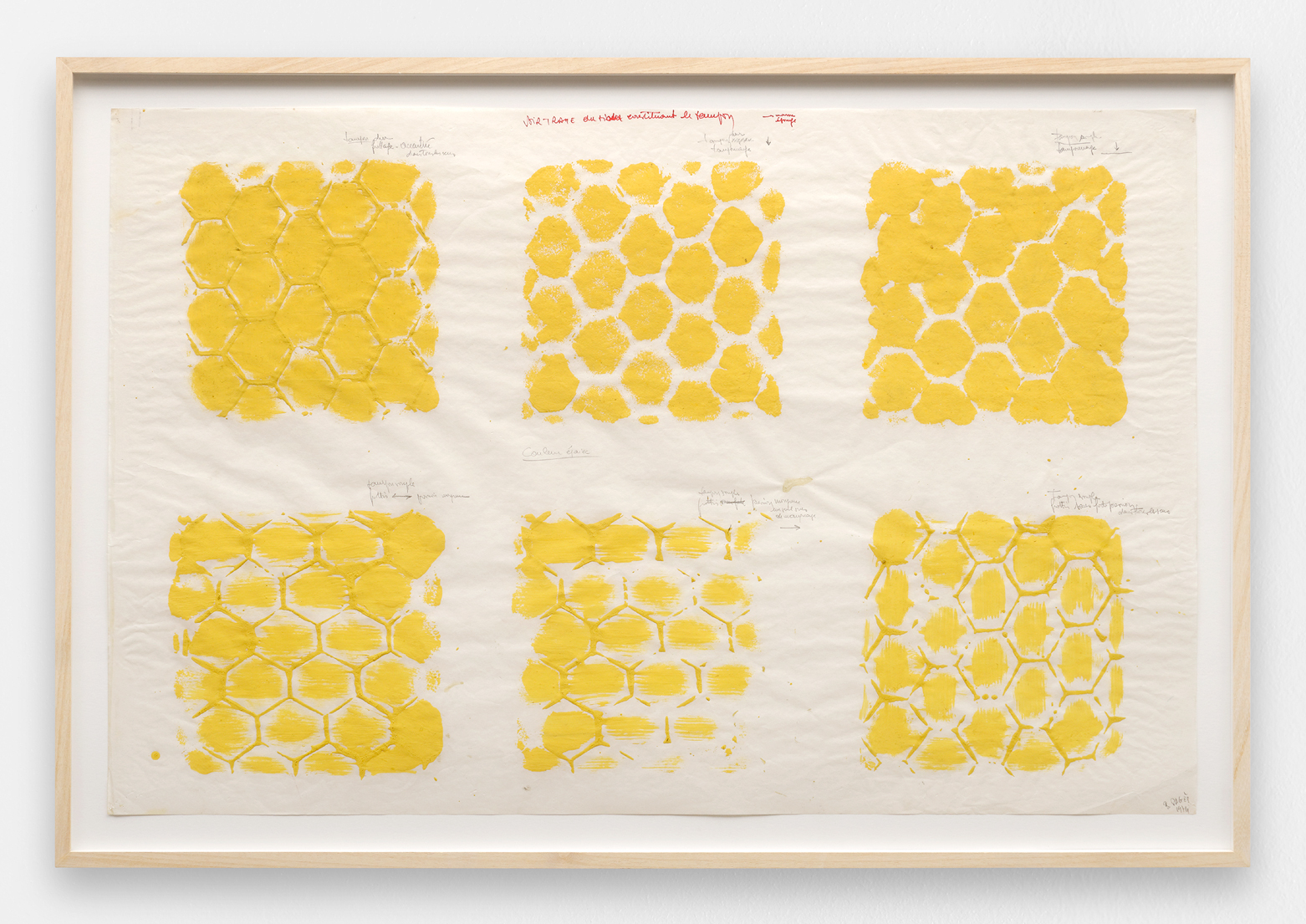 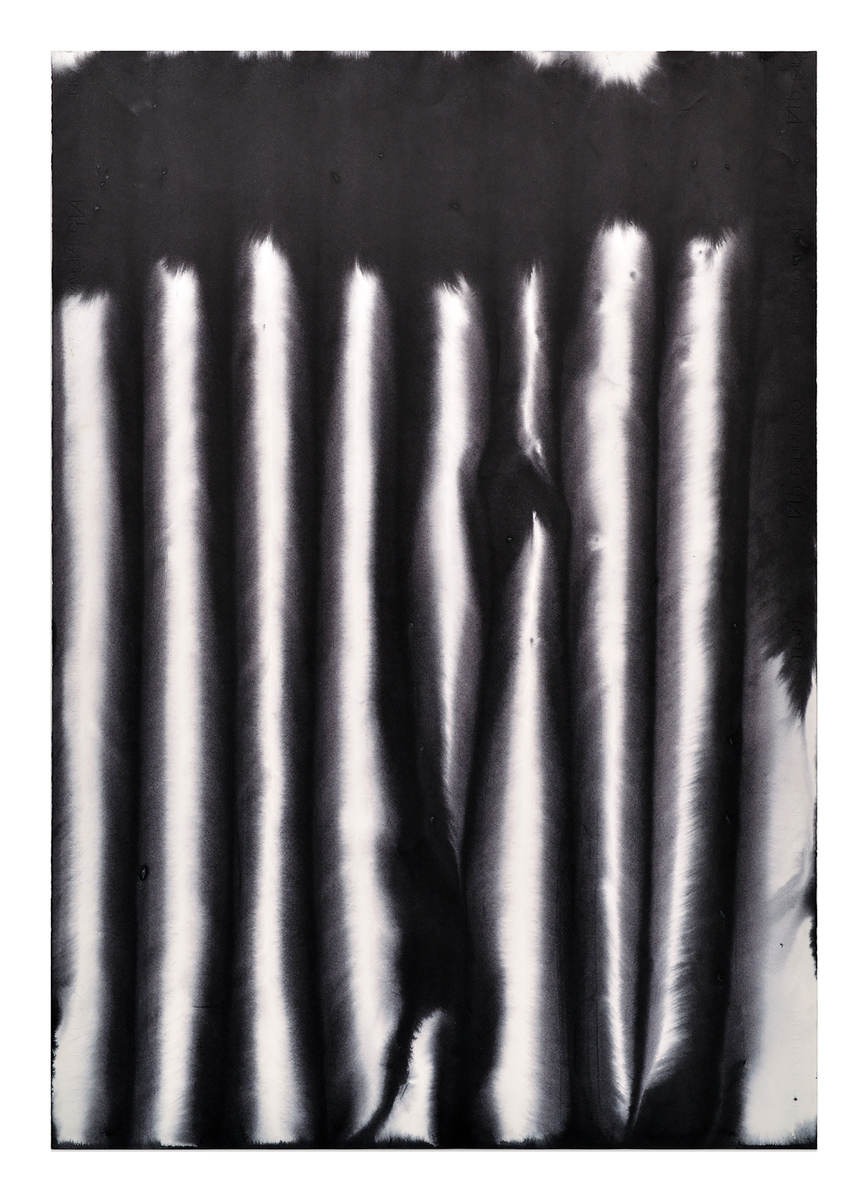 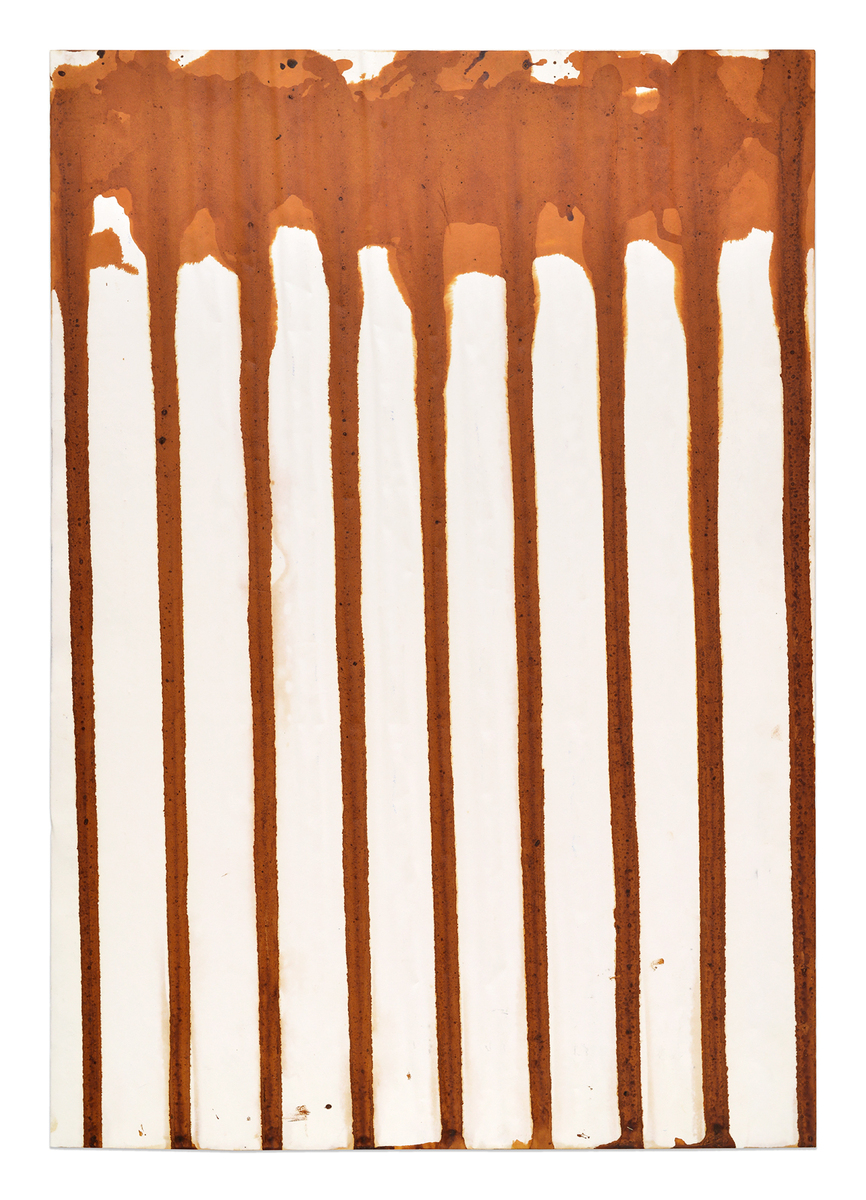 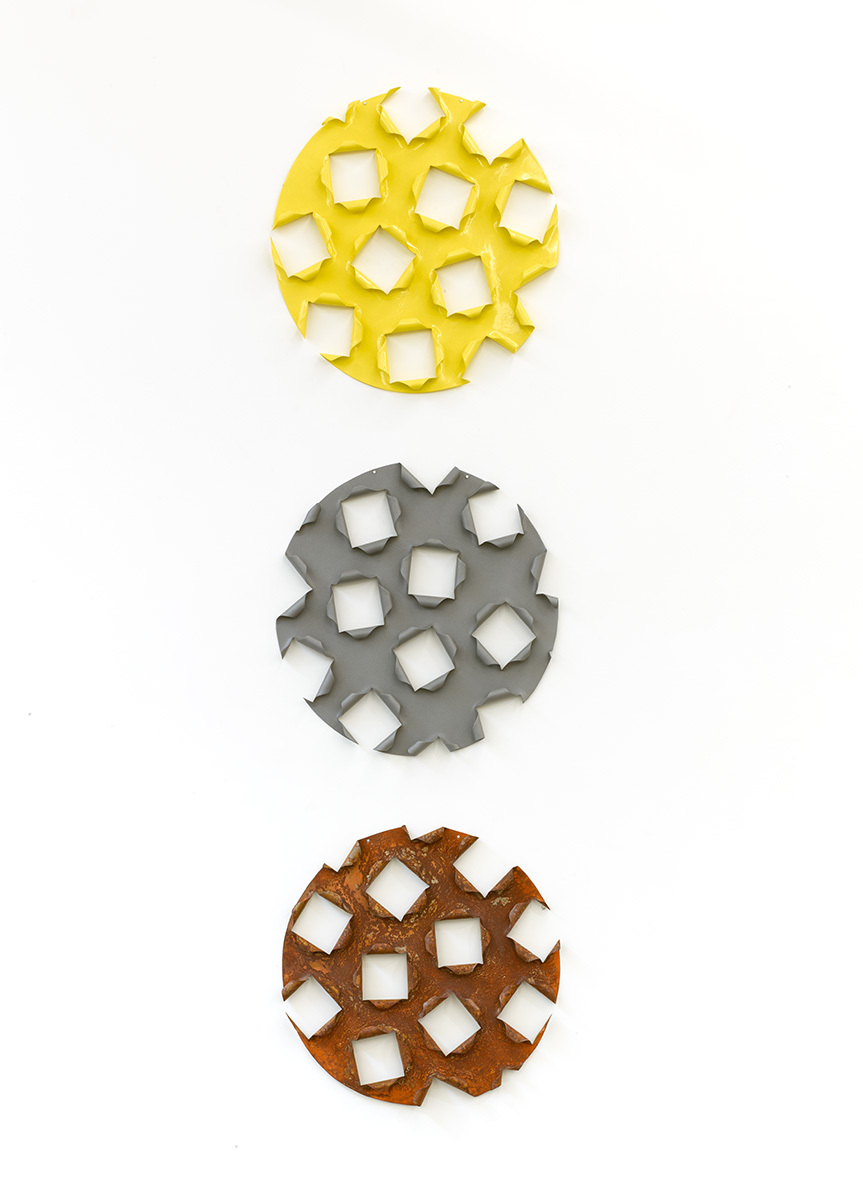 Born in 1940, in Cahors, France.
Lives and works in Contes, France.

Bernard Pagès is a French contemporary sculptor born in Cahors in the Lot in 1940. He participated by chance Supports/Surfaces. Bernard Pagès arrived in 1959 to Paris. It's to the Workshop of Sacred Art that he becomes aware of the accessibility of the sculpture. In 1967, the artist abandons the painting and the traditional sculpture after an exhibition of the New Realists in Nice.

Bernard Pagès introduces the movement Supports/Surfaces in 1967. He uses materials abandoned to realize his sculptures, then he assembles bricks, wood, stone floor, stone, gravel, pipes... He lists his sets by Inventories, Lists, Enumerations. As time goes by, his work turns to more and more colored and baroque works.
Bernard Pagès interviewed by Marie Maertens.

In the current exhibition, you present one of your major pieces from the Supports/Surfaces period, Tôles et barres de bois, from 1971. Can we talk about the creation of this piece?

This sculpture is composed of corrugated metal sheets and pieces of wood in bundles, spread out or heaped together, and cut to the dimensions of the length or width of the sheets. The whole piece occupies an area equivalent to that of one sheet, with the rigid line of the sheet's waves clashing with the random patterns of the pieces of wood. Multiple combinations take form, depending on the respective positioning of these two distinct, juxtaposed elements. Tôles et barres de bois offers 112 different possibilities, according to a sort of program whose aim is to identify all potential arrangements.

So, you see this piece as a three-dimensional drawing?

In a sense, I designed numerous works on paper starting from a drawing of rigid lines - sometimes parallel - made using a ruler or twine pulled taut, juxtaposed with soft drawings done freehand, with a brush or some other instrument. In addition to these gestures, the frequency of movements and the material used both come into play - as does, of course, the entire range of diversity provided by color.

Was the use of manufactured materials also a reference to the world of factories?

These materials could indeed be considered trivial. But for me, getting into sculpture also represented the bold gesture of definitively ceasing to paint. However, remnants of painting nonetheless subtly surfaced in the materials I choose to use for sculpture and that, often, I delicately transform by tinting them with very diluted color. It's a way for me to appropriate the material-to not present it in a state of nudity, to in some sense, civilize it.

Should we see this as a strong desire to « distort » an substance unusual in art?

With painting, I had the impression that I was borrowing more-,related to teaching or to things I had seen here and there whereas sculpture let me start again, drawing rather from my own childhood experience on a farm. In abandoning painting, this other world surfaced and nourished me. Moreover, the example of the Nouveaux Réalistes was reassuring as I moved in this direction.

Your work also calls to mind Art Povera.
Have you ever felt an affinity with this movement?

It seems to me that this movement was more faithful to materials than I could be, and more focused on Nature as well. Giuseppe Penone uses the growth of wood, its transformation and the way in which it can invade a foreign element. This approach might be more poetic than mine, as my main concern at the time was constructing figures with rudimentary elements by experimenting with their arrangement.

You have always created your pieces outdoors, or designed them to be presented in situ.
The 1969 exhibition in Coaraze., which was all the more important as it was one of the first times in France that artists occupied spaces other than traditional exhibition spaces was a testimony to this.
Were you familiar with the early Land Art works?

I was aware of this movement, yes. Even though I had not met the artists, I had seen images and read texts. It was in keeping with the spirit of the time and, in this respect, I did not feel isolated. My work found its direction through a mix of introspection, memory, and a sense of adventure that forged ahead.

Does your work include a trace of the artist's body?

No, because the arrangements could have been done by anyone. I could delegate assembly of the piece, although I never do. It isn't complicated ! This piece, anyway, remains a simple combination of raw material and industrial material, a rigid element and another soft one a sort of juxtaposition of two worlds.

That's what you meant at the time by « Getting sculpture going again »...

When I gave up painting, I created a sculpture that I would describe as somewhat « conventional. » But the « École de Nice » exhibition organized in late 1967 at the Galerie des Ponchettes, with Arman, Yves Klein and Martial Raysse, was a real revelation for me.
After seeing it, I dropped everything to do with direct cutting, and everything that was meant to have come from tradition. I used simple materials and developed a basic vocabulary based on two equal volumes. In my first piece branches -chewed by rabbits beside bottles- verticality remained important, as it was the sole element of geometry. This piece also features the confrontation between a soft element and another, angular one. After that, I abandoned pedestals; my pieces became larger, and were sometimes developed in series.

Original views on the banal

Supports / Surfaces: Revival and reminiscences at the FIAC