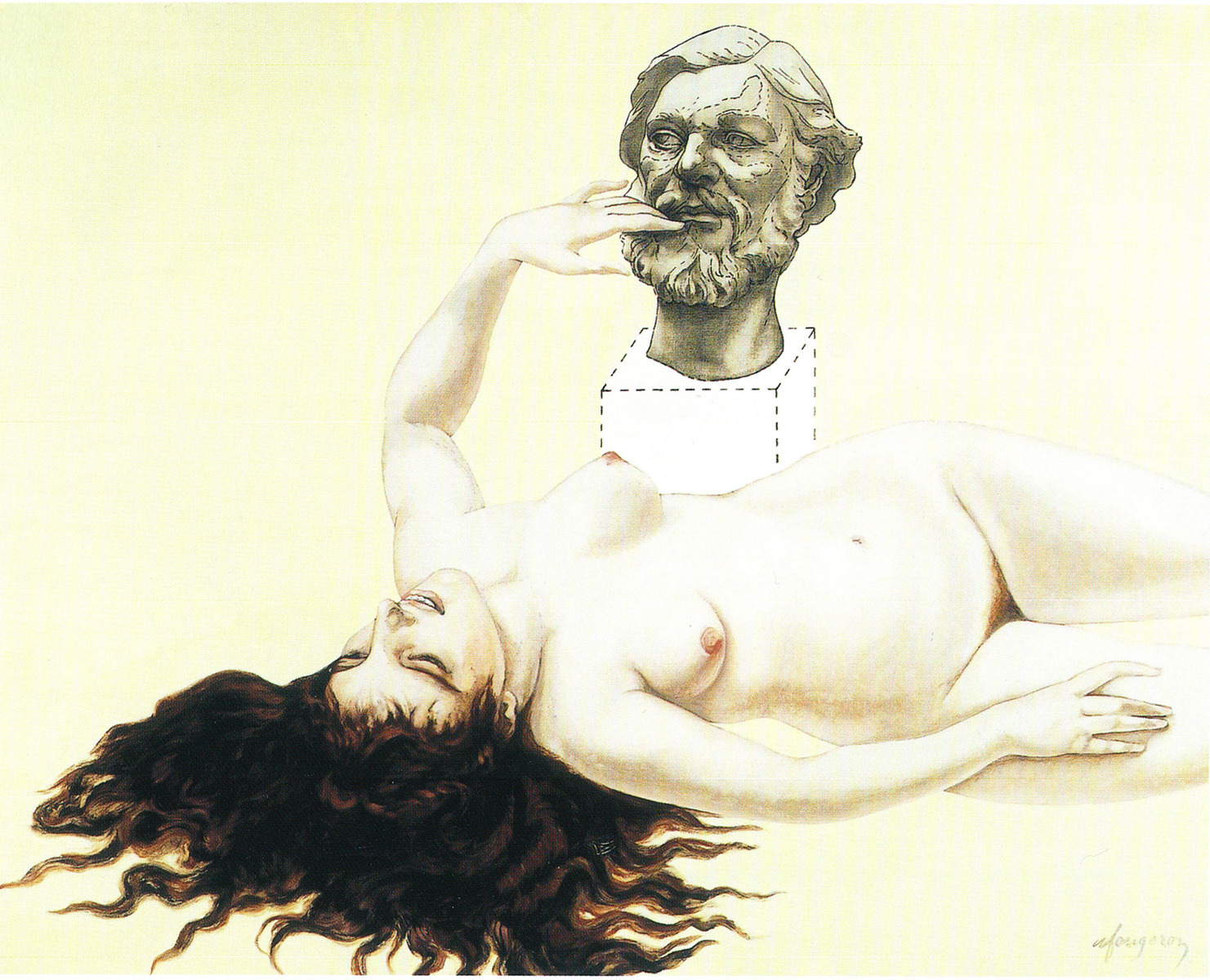 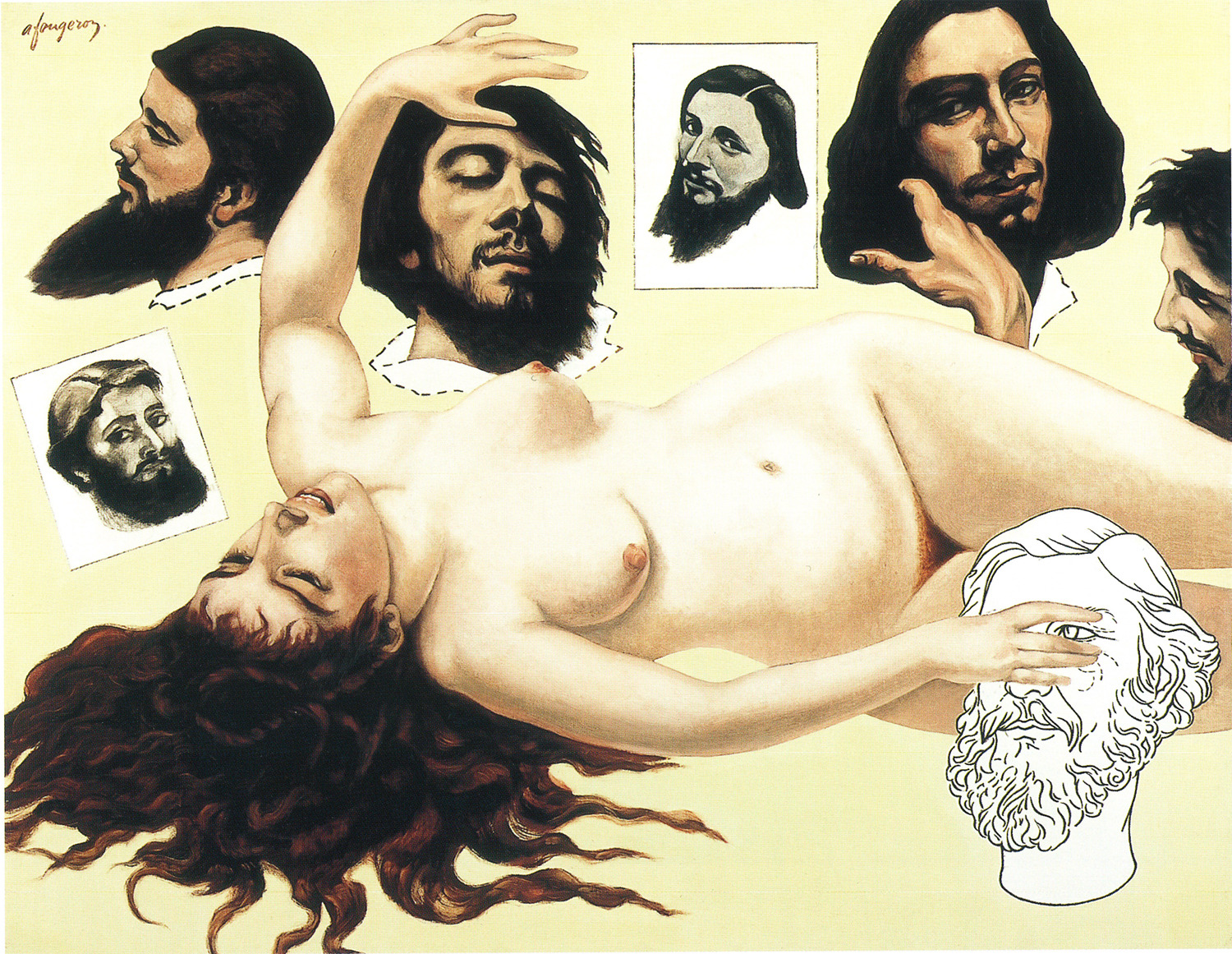 1940
Battle at the Belgian border. Prisoner. Joined the Free Zone. Demobilized in Périgueux. Back in Paris. Milite in the Resistance.

1941
His workshop is transformed into a clandestine printing. Draw the titles with his friends, print newspapers: "The University", "Les Lettres françaises", "French Art", etc..

1942
Invited to the exhibition "The Stages of New Contemporary Art", organized by Gaston Diehl. Galerie Berri-Raspail. Abandons his workshop as a security measure, because of an arrest. Back with his friends a new print shop.
Some artists get together, they join the "National Front". Fougeron was appointed manager of the Front National des Arts. " Painters Edouard Pignon Edouard Goerg form and with it the illegal direction. Jacques Villon him at work and introduced him to the burning.

1944
Meet Pierre Villon and Paul Eluard. The Front National des Arts' publishes an album, "Overcome", sold for the benefit of the "Francs-Tireurs Partisans and French."
Grave 5 etchings for a poem by Martial d'Auvergne: "Prayer for the underprivileged." Raoul Mortier, 225 ex.
Guests at the "Ten Painters subjective" organized by Bernard Dorival at Galerie de France.
Contract with the Galerie Drouin.
During the insurrection in Paris and resumed the leadership of Fine Arts, attached to the cabinet by Joseph Billiet. Director of Fine Arts until November 1944.
Joseph Billiet the charge, in agreement with the Director of the National Front for the Arts and the President of the Salon d'Automne Montagnac PP, organize an exhibition of works by Pablo Picasso in the Salon d'Automne neighbor called the "Salon de la liberation. " Tribute to the greatest painter living symbol of artistic resistance to Nazi occupation. The Front National des Arts presents the Musée d'Art Moderne de la Ville de Paris exhibition "Henri Rousseau customs" to commemorate the centenary of his birth. Catalog foreword by Paul Eluard. The painting "The War" was discovered and shown for the first time. Campaign and efforts of the National Front for the Arts are acquiring the canvas by the State.

1945
Participates in the exhibition "Young French Painting" at the Palais des Beaux-Arts in Brussels.
Draw models of sets and costumes of "Divinas Palabras" by Ramon Valle Inclan. Théatre des Mathurins, directed by Marcel Herrand. The National Front for the Arts presents "Daumier polemicist" in the Galliera Museum. 120 lithographs and sculptures. Catalog Huygue prefaced by René de l'Académie Française.
First meeting in Paris and the beginning of a long friendship with Renato Guttuso.

1946
Warsaw. National Museum "Contemporary French Painting" Fougeron, Gischia, Pignon, Tal-Coat. Exhibition organized by Pierre Francastel. The Front National Arts dissolves and other artists gathered in the broad based strength "Union of Plastic Arts" attached to "The National Union of Intellectuals." Fougeron was elected Secretary General of the Union of Plastic Arts, a position he held until 1950.
With support from Jacques Jaujard and Robert Rey, the first Salon d'Art Contemporain Français au Musée du Luxembourg. Catalog foreword by Jean Cassou. First special exhibition at the Galerie Billiet-Caputo. National Prize of the Department of Arts and Letters.

1947
Stay in Italy.
Publication of an album of drawings, preface by Louis Aragon, published "The 13 ears." Exhibition at the Ecole des Beaux-Arts: "The National Prize and scholars of the State".

1948
Salon d'Automne. His painting "The Parisian market" caused a scandal by his social inspiration. Draw a poster against the atomic bomb. Charged, prosecuted.

1954
Invited to the Venice Biennale: Lithographs.

1966
Vienna. Invited to the exhibition "The Art hired since Goya."

1968
Berlin. Retrospective exhibition at the Neue Berliner Galerie. John Heartfield delivers the welcoming speech on behalf of the Union of painters of the German Democratic Republic. The exhibition is presented in Weimar (Kunsthalle), Dresden (Albertinum) and Moscow (Pushkin Museum) and Leningrad (Hermitage Museum).
Grand Prix des Peintres Witnesses of their time in 1968.

1969
Special exhibition gallery Katia Granoff.
Participates in the exhibition "Art and Work" held at the Galliera Museum to celebrate the 50th anniversary of the founding of the International Labor Organization. Catalog foreword by René Huygue of the French Academy.

1972
Special exhibition "The Loire and its harvest," Center for Art International.

1974
Trip to Berlin. Interviews at the Academy of Fine Arts of the German Democratic Republic to attend Suzanne Pagé, curator in the preparation of the exhibition it will host in November at the Musée d'Art Moderne de la Ville de Paris (ARC 2) photomontages by John Heartfield.

1975
From this date sets each year as part of the FIAC Grand Palais: Stand Toninelli Arte Moderna.
Exposure. The Works on Paper'33 compositions dessinées "Lamp Gallery in the clock.

1976
The Arte Moderna Toninelli Gallery presents the exhibition "The Confrontation" successively in Rome, Bologna, Milan and Palermo.
Sofia. Participation in the 2nd Triennial of International Art realistic. Award with medal and diploma.
Paris Federation of the Socialist Party. Part in the exhibition of the 40th anniversary of the Popular Front. A painting, two drawings (the beginning ...)

1982
London. Guests at the Barbican Center: "Aftermath - New Images of Man France 1945-1954." Germain Viatte Commissioners and Sarah Wilson. Exhibition at the Museum then travel to Louisiana Humlebeack.
Mechelen. Cultural center. Participates in the exhibition "Social Engagement in Art."
Lille. Exhibits at the Museum of Fine Arts. "From Matisse to our days," Commissioner Shoemaker Aude.
The National Museum of Modern Art acquired his painting "The Judges" (1950). Dunkirk. Inauguration of the Museum of Contemporary Art. (Two paintings).

1986
Participates in the exhibition: "The figures from the 60s to today. Commissioners and Francis Gerard Xuriguera Parent.
Lille. Exhibits at the Palais Rihour. "The game of 50/100 years (Union des Arts Plastiques). Commissioners Michel and Edouard Trémeau Joule.
Saint-Brieuc. New Museum, two paintings and two drawings in the exhibition: "1936. Crisis and hope in art and news. Commissioner Pascal AUMASSON, curator of the museum.
Krakow. Exhibition Pavilion, participates in the 11th Biennale Internationale de la Gravure.
Warsaw. Zacheta gallery. Invited to submit two paintings including "The Parisian Market (1948) to" 4 times in Paris 1913-1925-1947-1972. General Commissioners: Dominique Bozo and Ryszard Stanilawski, curators of the exhibition Stanislas Zadora and Serge Fauchereau.
Grand Palace. Salon d'Automne, participates in a tribute to the "Peintres Témoins their time."
Belleville area, shows a painting from "The Art witness or actor in society," Commissioner Francis Parent. Catalog foreword by Gerard and Francis Xuriguera Parent.
Canterbury College of Art (The Herbert Read Gallery): Participates in the exhibition "From Delacroix to Dubuffet, illustrated books of French artists. "

French painter. Self with Edouard Pignon, he participated in the group "indélicats. In 1936, he painted works incurred (death and hunger, Spain) and in 1939 he took his card to the Communist Party.
During the war of 39-45, it was printing leaflets illegal in his workshop.
The question of realism is in the heart of the debate Communist intellectuals. The piece of Fougeron "The Parisian Market" (Museum of Modern Art in Saint-Etienne) illustrates the theory of socialist realism, supported by Aragon and letters Françaises.Cette painting, expressionist far from those of Picasso or Léger , his contemporaries, is not recognized at fair value.
See the book by B. Ceysson "Fougeron.

"André Fougeron is one of the great realistic painters of the twentieth century. Communist militant, strong, he is, after the Liberation, one of the most promising young painters of French tradition. His painting, with that of Gable and Gischia , differs from that of non-figurative drawing by his stylish and expressive. National Award for Arts in 1946, this Fougeron at Salon d'Automne of 1948, the Parisian market, the beginnings of a "new realism". Its manifesto, "The painter in his lap, against abstraction, art for art is an art for the people. Table and scandal are evident. Fougeron for the bourgeois and communist criticism, is the embodiment of socialist realism . But it does not bend over to the dogmas of the Stalinist art Boris Taslitzky, Mireille Miailhe, Jean Amblard and Gérard Singer that oppose him in 1953, Aragon. Criticized by the Soviets for National Defense, 1950 and on 18 March 1871, the funeral of the son of Victor Hugo, in 1952, it is by Aragon, for Atlantic Civilization, 1953. Nevertheless, André Fougeron remains committed painter and activist. Around 1970, his style is similar to that Figuration of the narrative.

In 1976 and 1977, paintings and drawings to celebrate the centenary of the death of Courbet is an explicit response to the 1952 book of Aragon: "The example of Courbet. Fougeron invests the work of it. It is his workshop, his factory. This reactive themes and motifs, accurately transcribed, in the context where it belongs. This critical celebration of art and the carnal power of Courbet puts into question his own life as a painter. His works are radical break with a pleasant French art and decorative.
Group shows at Ceysson Gallery
Guerre(s), Paris
December 18, 2019 - February 01, 2020