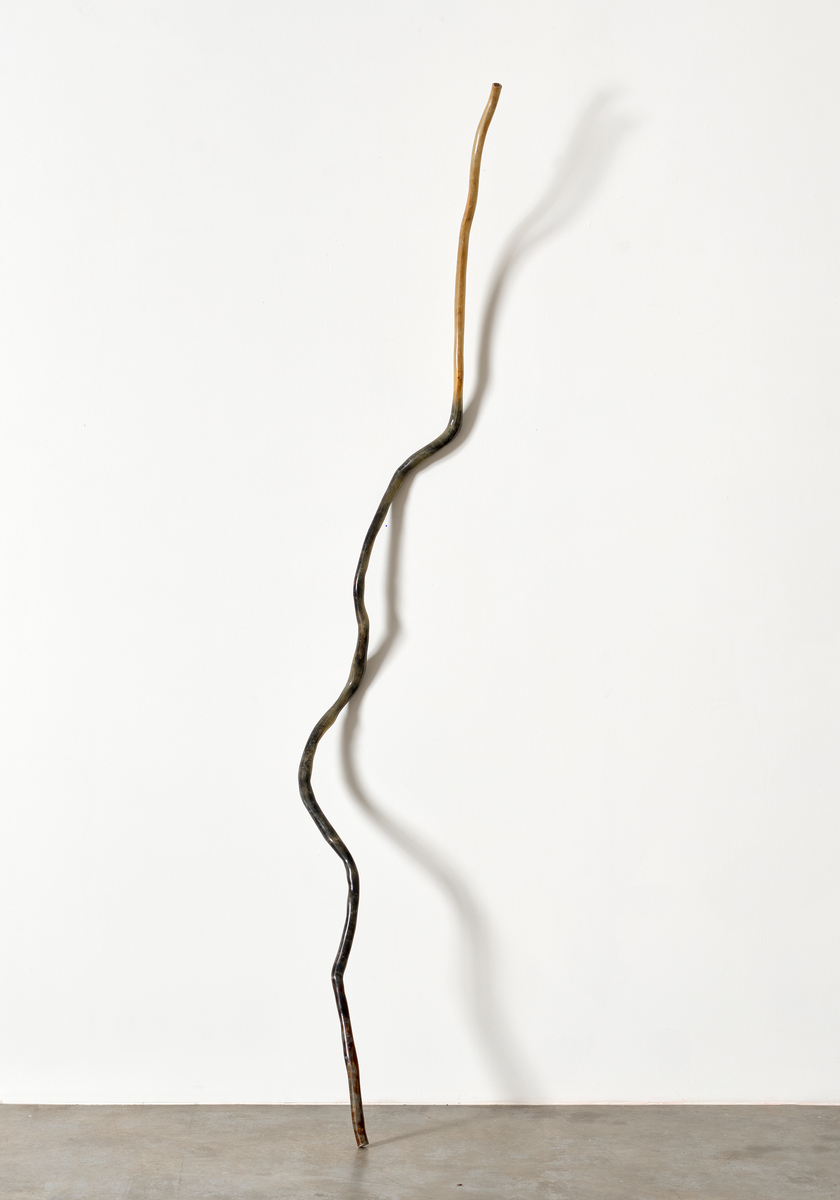 Toni Grand was born in 1935, in Gard, France. He began his education in literary studies and then went to l'Ecole des Beaux-Arts in Montpellier. At the age of twenty, he chose to specialize in sculpture, working with lead, polyester, steel, cast iron and various other materials. His first exhibition was held at the Paris Biennale in 1967.

Since Grand decided to immolate his oeuvre, the pieces that escaped the conflagration are conserved in private collections or renown museums that have yet to produce the retrospective his work deserves. He used mainly elements of wood, stone, bone and fish of the congridae family to produce image-forms whose recognizable features are not the attributes of a signature style, but of authentic imagination.
Grand's production has been considered a response to American Minimalism and Process Art. If his ingenuousness rivals Carl Andre's artlessness, his steel sculptures weigh in with Richard Serra, and his experiments with anti-form compare with Robert Morris, Grand manages sin machismo. The Ceysson gallery is proud to present the manly art of Toni Grand.

An exceptional sculptor of the latter half of the 20th century, Toni Grand (1936-2005) used mainly elements of wood, stone, bone and fish of the congridae family to produce image-forms whose easily recognizable features are not the attributes of a signature style, but of authentic imagination.

Since Toni Grand decided to immolate his oeuvre, the pieces that escaped the conflagration are conserved for the most part in private collections or renown museums that have yet to produce the retrospective his deeply pondered work deserves.

Grand's production has been considered a response to American Minimalism and Process Art. If his ingenuousness rivals Carl Andre's artlessness, his steel sculptures weigh in with Richard Serra, and his experiments with anti-form compare with Robert Morris, Grand manages sin machismo. For the 1967 Paris Biennial, Grand presented a series of composite works: rectangular cuboids made of steel containing polyester resin moulded into organic forms. These parallelepipeds could be presented on any of their 6 faces-- and Grand returned to the exhibition every day to turn each piece over. By definitively rejecting the pedestal, he too accomplished what Richard Serra called "the biggest move of the century."

Grand spent the 1960s and 70s disputing the customary function of sculpture as mimetic, symbolic or allegorical representation, and rejecting its tradition of noble materials such as marble or bronze. His lignes courbes made with a bandsaw give an impression of drawing in space similar to Rosemarie Castoro's Cracking pieces. During that period, he also made numerous wood pieces with titles of almost artless forthrightness such as Vert, équarri, équarri plus une refente partielle, équarri plus deux refentes partielles (Green, squared with a partial split, squared with two partial splits.) Such verbal mannerism emphasizes the process and formalist esthetic of the work even as it protests minimalism's renunciation of handcraft.
As he evolved to challenge the limitations of the modernist paradigm Grand found, like Nancy Graves, Eva Hesse and Linda Benglis, resin to be a most appropriate medium to explore the intersection between the evocative metaphors inherent in organic forms and the reductive esthetic of minimalism. There is much to mine in the comparisons between Graves' camels and Grand's Cheval Majeur, Eva Hesse's grid-structured works of and Grand's polyester-fish cubes of the 1990s, or Linda Benglis' For Carl Andre and Grand's enormous wood and resin Sans titre of 1983.

One of Grand's largest works, Du simple au double (1993), consists of 17 polyester resin cylinders. A predetermined length governs the height and circumference of each cylinder. This structural simplicity based on a programmatic principle is brazenly undermined by the informal unit of measure: the conger eel coated with resin and incorporated into every element of the artwork. Here Grand takes his place in a conceptual tradition by using word play to investigate the functioning of metaphor in visual art. His conger eel, "congre" in French, is indeed a most incongruous material, which he binds into ponderous primary structures with a sense of humor some might call Duchampian. As a highly cultivated Frenchman, he may have remembered Baudelaire's Artificial Paradise where the most trivial ideas take on a new and bizarre physionomy full of " endless word games, unforeseeable incongruous resemblances and analogies."

On rereading it, this interview appears to me as though marked by the stigmata of the 1970s. This is, of course, only natural, only evidence of time passing. But it is still nonetheless a document. It highlights the questions of the day with regard both to Toni Grand and with his "Interviewer, concerning painting as painting and sculpture as sculpture. This kind of tautology, however absurd it may appear to me today, reflects this obsession of a task that strove to draw from material more than a form or configuration of forms including the visually effective and obvious "Beauty", without using any artifice whatsoever, without the addition of any tricks learned and borrowed from various trades, which appeared on viewing a work. No subject, no narrative declared itself or emanated from this, giving a readable meaning or significance to works that their authors defined in the first instance by their form born of a dialectical game determined by their materiality, and a work that especially did not seek to transform the latter.
This game was based on a system of postulates explicitly linked to the history of the material and to the histories of artistic work. And these histories had to link up with the History made by men, the masses, in order to achieve the epiphany of the Ideal City. So this artistic practice, then, was to have been rooted in the humanities in vogue at the time: Marxism and its fratricidal tendencies, psychoanalysis and its conflicting currents, structuralism and its sometimes delusional schisms, but it nevertheless required the premises - embodied in an artistic practice unable to become mired in any disturbing "theoreticisms" - of an anthropology of art which is still lacking today. For these works whose appearance seems to make clear their absence of content, are not only forms of aesthetically impeccable configurations, but also no less than configurations of signifying forms whose "intrinsic" content seems inexhaustible. That is why, they then imposed a somewhat unusual and sometimes excessively pedantic vocabulary. The accompanying text bears the trace of this. Deliberately. To indicate that the interview motivating it already deviates from this and that a shift towards more poetic, more symbolic shores of art than those of the then current and dominant formalism were emerging slowly from the sayings of Toni Grand. On seeing the exhibition, perhaps, we will let ourselves, swimming against the stream from the valley upwards, consider that what was at stake in this formalist time under the guise of a theoretical discourse of a seemingly relentless rationality, was the search for absolute form, for Form at last crystallising the eternal fusion between artefact and organic.
Art and Nature. A kind of creative philosophy rejecting any imitation and forever crushing the false classicism of "Ut pictura poesis"?