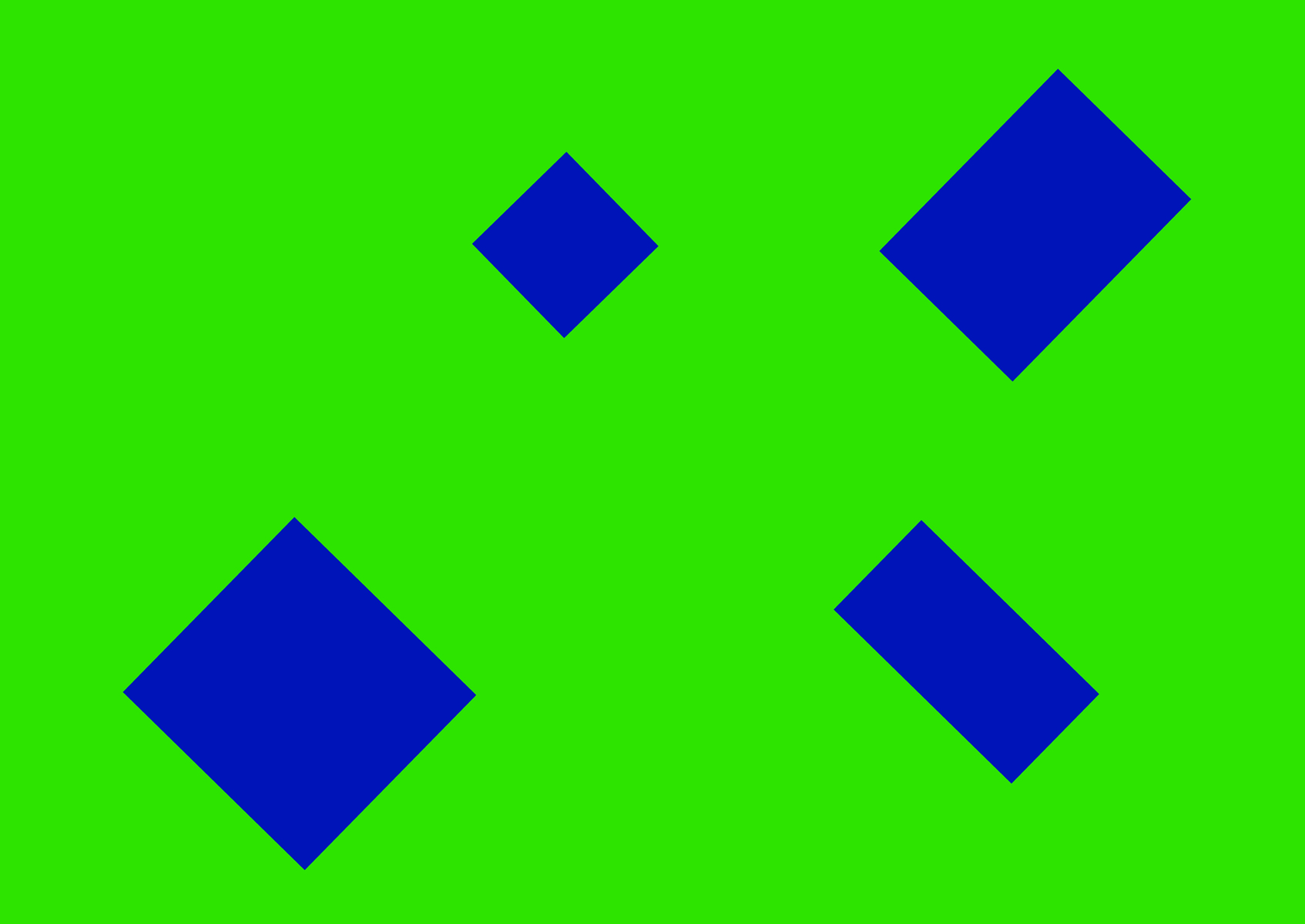 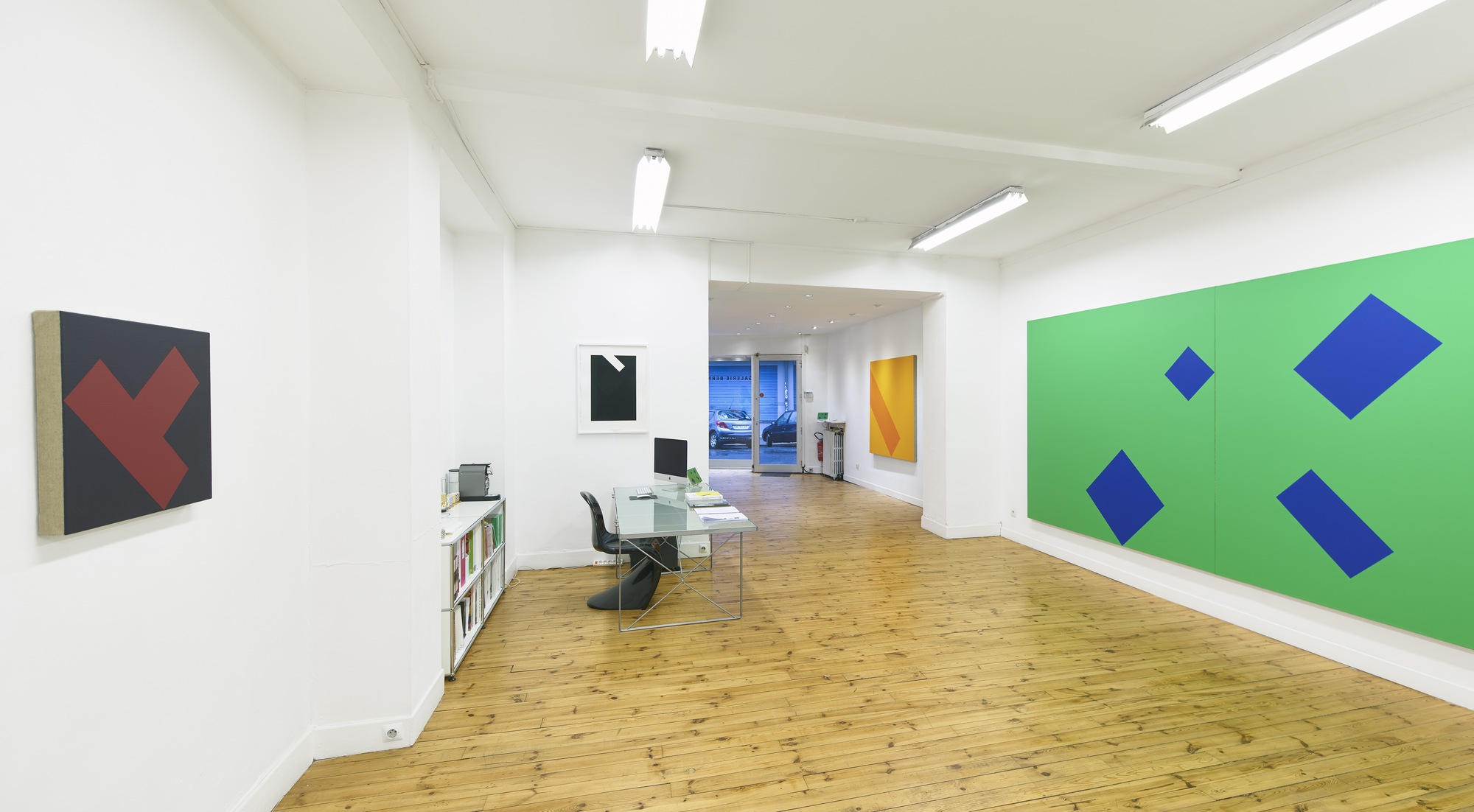 
Floquet is certainly interested in the history of abstract forms, but that history is not the subject of his painting. his painting certainly confirms the loss of modernism, but it does not deplore it. On the contrary, it tries to save what was essential in it : a morality of engagement combined with a kind of sincerity in the act of painting.
Floquet was more interested in Claude Rutault and his conceptual approach of the monochrome, or in the discursive painting of his fellow countryman rimy Zaugg, and in the ambiguous abstraction of Gerhard Richter - three highly diverse but precious examples of approaches informing the tradictional medium of painting with questions that could, in a number of ways, underpin its relevance when faced with the anti-ideological position of post modernism.
But it was at the solo exhibition given him by Galerie Marika Malacorda in Mai 1985 that Floquet offered decisive examples of this progressivee affirmation of geometry. There he showed canvases in which the forms, filled with much bolder colours, were reduces to triangles, squares or rectangles, with effects of matter and texture being excluded. This, even less than before, was not « return to painting » painting. Floquet now began to impose a number of recurrent limitations, including the use of unmixed colours (wallpaint, a cheap industrial acrylic paint) in limited quantities, applied in thin layers, and linear delimitations that are as clear-cut as possible (the systematic use of scotch tape, starting in 1987, allowed him to achieve perfection here).
Thus, after his formative years, Floquet opted for geometry, a mode of expression that need not exclude a kind of subjectivity, but a subjectivity that does not necessarily involve exhibition of the gesture : « The subjectivity of the brushstroke or the gesture is not something that interests me. It’s a false subjectivity. One must try to put one’s subjectivity elsewhere.
This question of gesture is indeed something that has always been a concern for Floquet, who continues to want to keep expressiveness at a distance, without, however, foregoing the kind of instinctive painting whose ideals do not seem far from those of a kind of geometrical action painting - engagement without outburst. In 1993, at the very end of his cycle of counter-compositions, he came back to this on the occasion of a new survey of abstract painting in francophonee Switzerland, the Peinture exhibition in Geneva. He stressed the point that « gesture in painting is not the brushstroke » while claiming to produce, just like abstract expressionism, a painting of the moment : « Personnaly, I always try to show the present moment, because painting is really an attempt to live the present moment. But I want to show something other than the brushstroke ». And he added : « My canvases are highly structured, but I can say, without the being contradictory, that there is an impulsive aspect to my work as well ».
When, on the threshold of a new arid in is work, Floquet stated that « what interests me in painting is its two-dimensionality, its planarity its surface », he was not simply mouthing the mantra of self-referentiality adopted by modernist abstraction. Rather, he was stating the framework of constraints, the prescriptions and the constants within which the painter can pursue his engagementt; Let us recapitulate : more than ever, a geometry of simple and clearly legible forms, structured by the rich angle tilted 45° to enter into opposition with the orthogonal system of the stretcher, the exclusion (with a handful of exceptions) of symmetry, the use of industrial colours set out in contrasting, unmixed patches of colour, without brush-mark effects, in fine layers, without either impasto or transparency, with the materiality of the medium and gesture of application remaining imperceptible, and delimited by incisive lines.