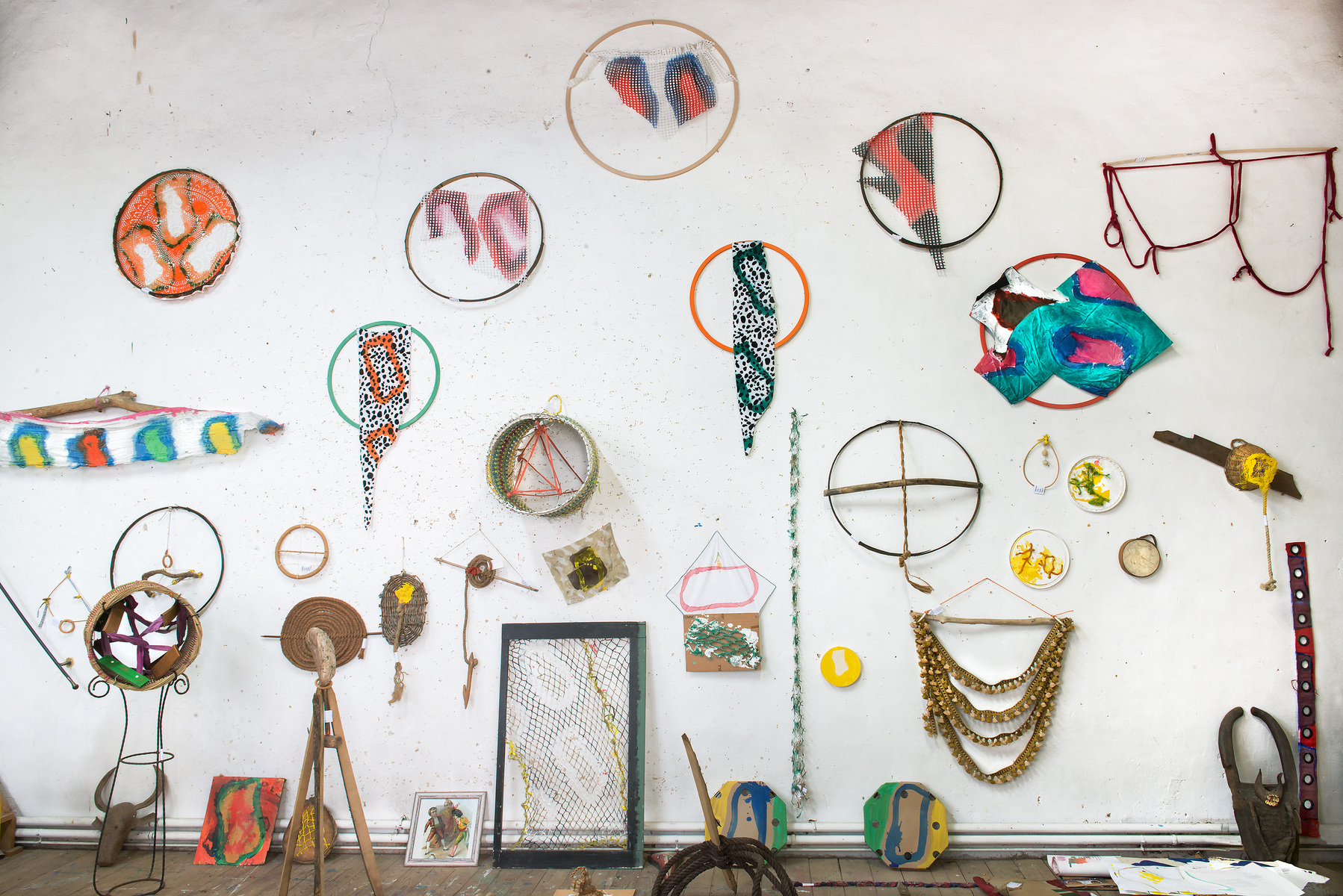 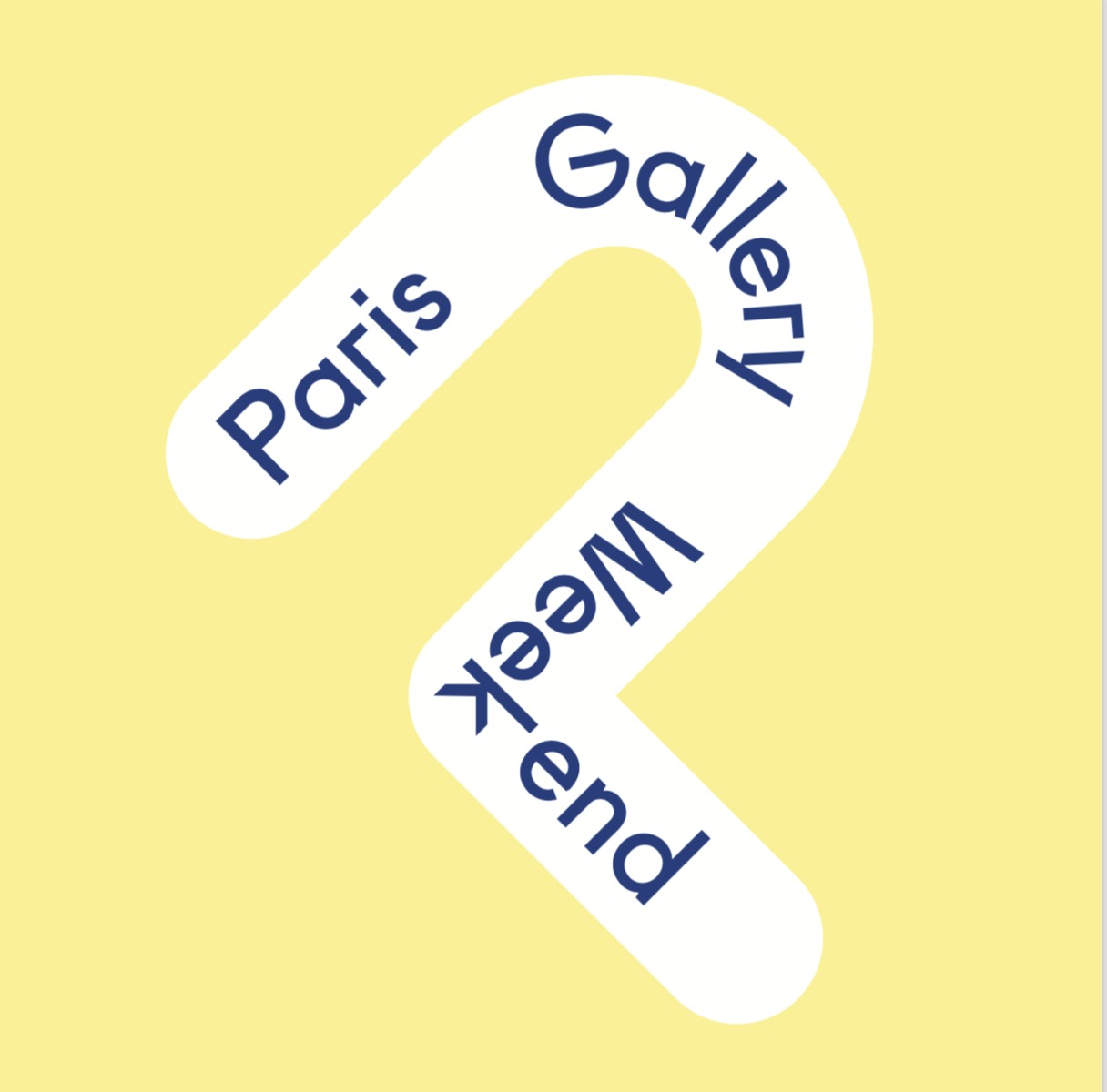 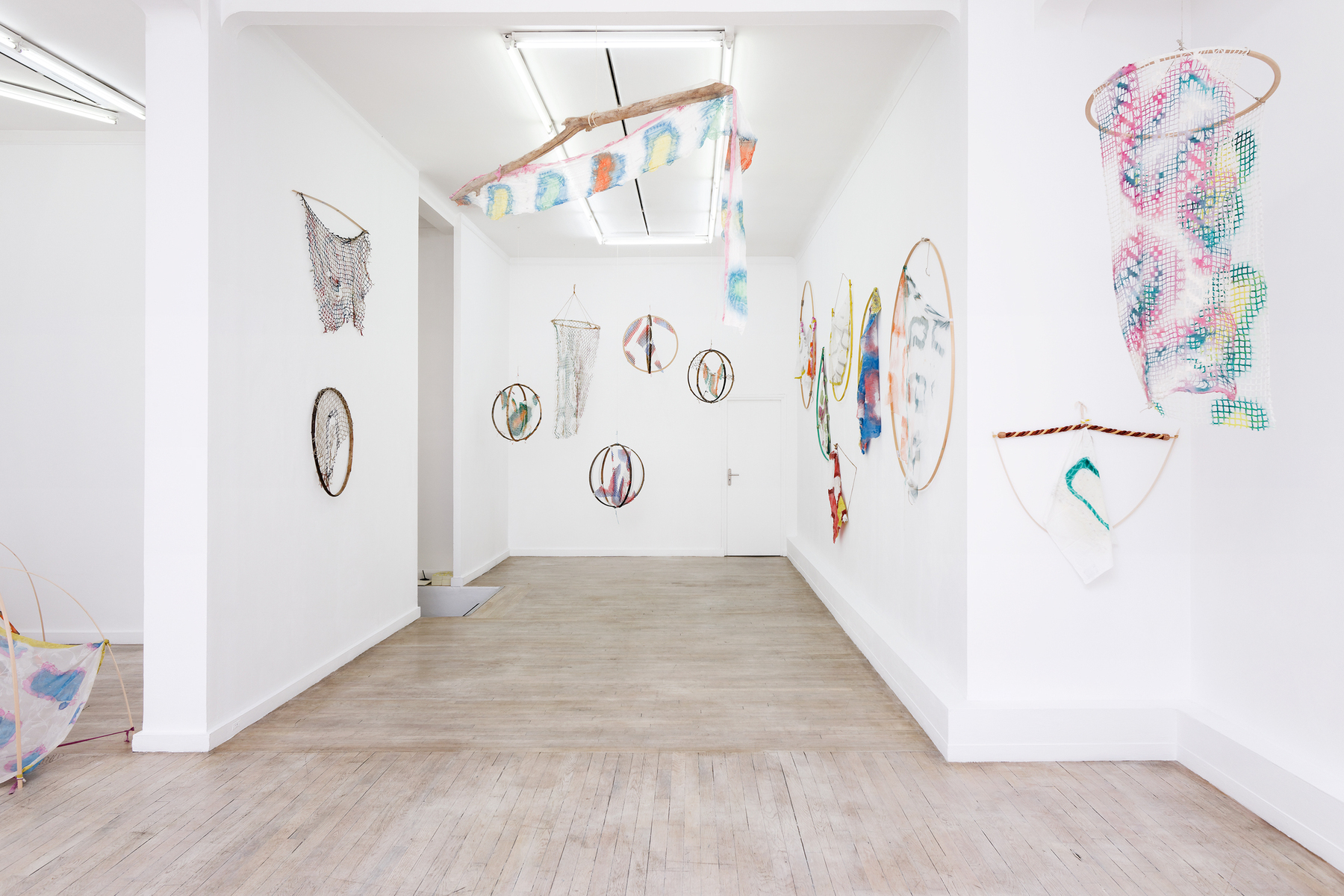 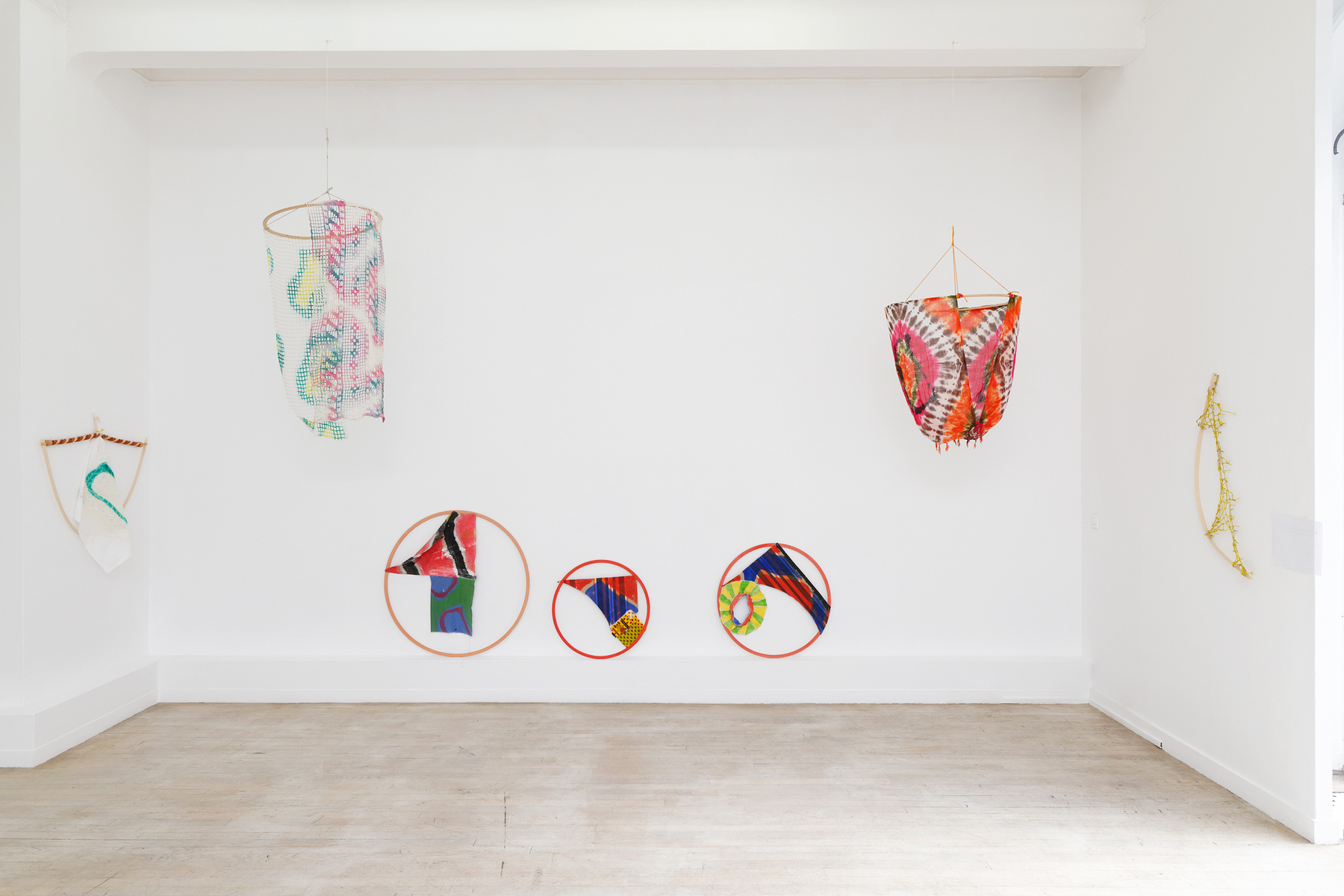 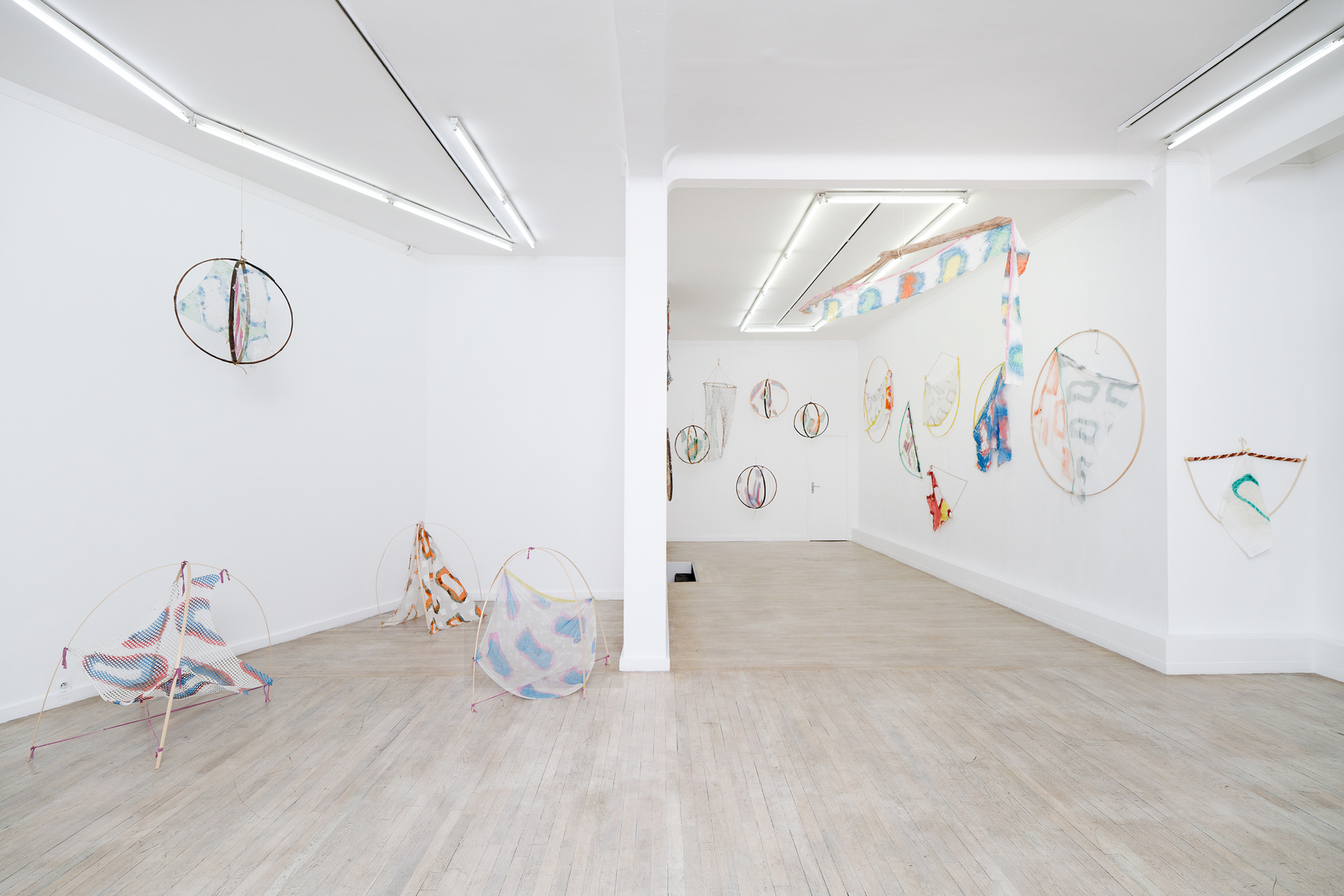 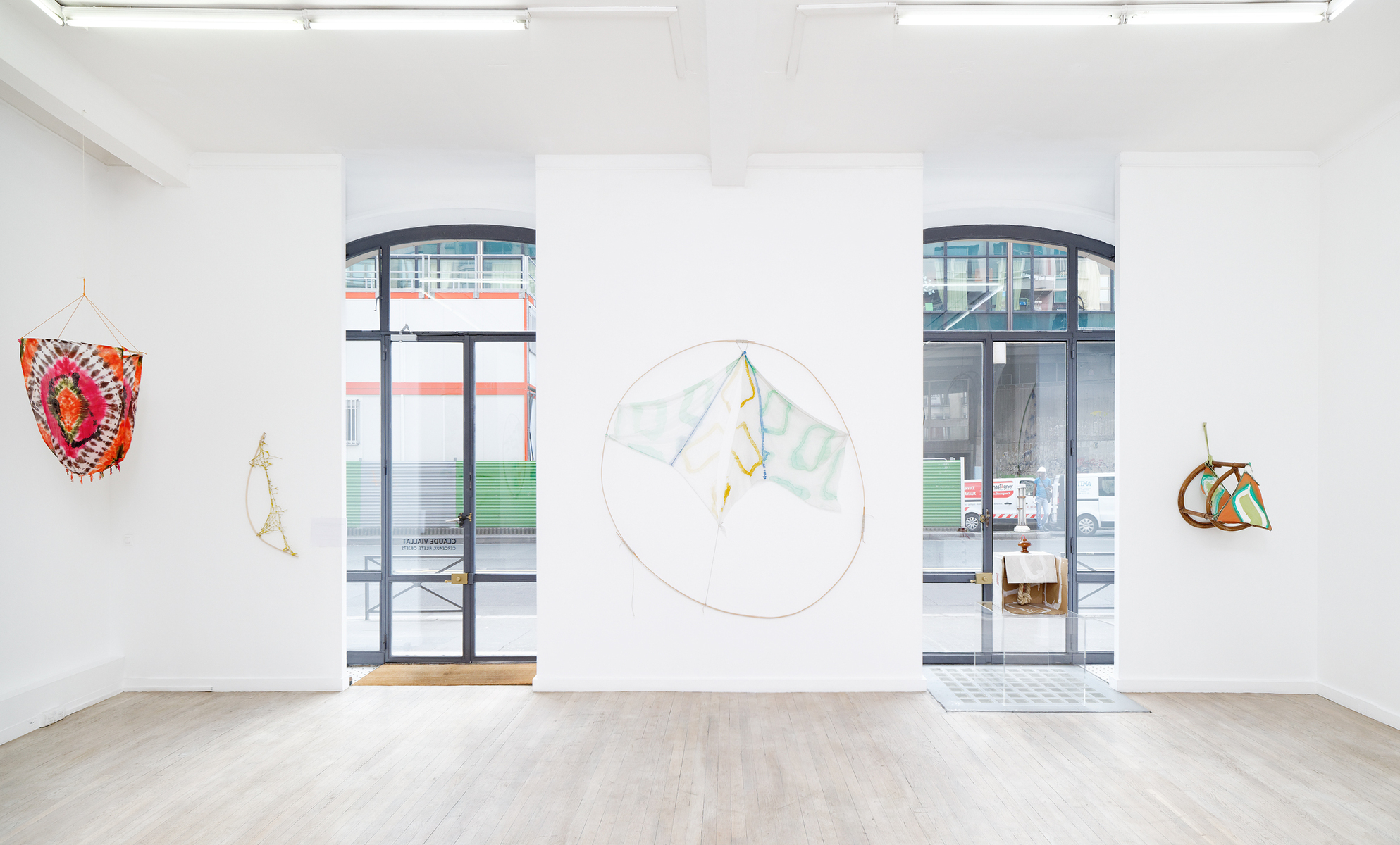 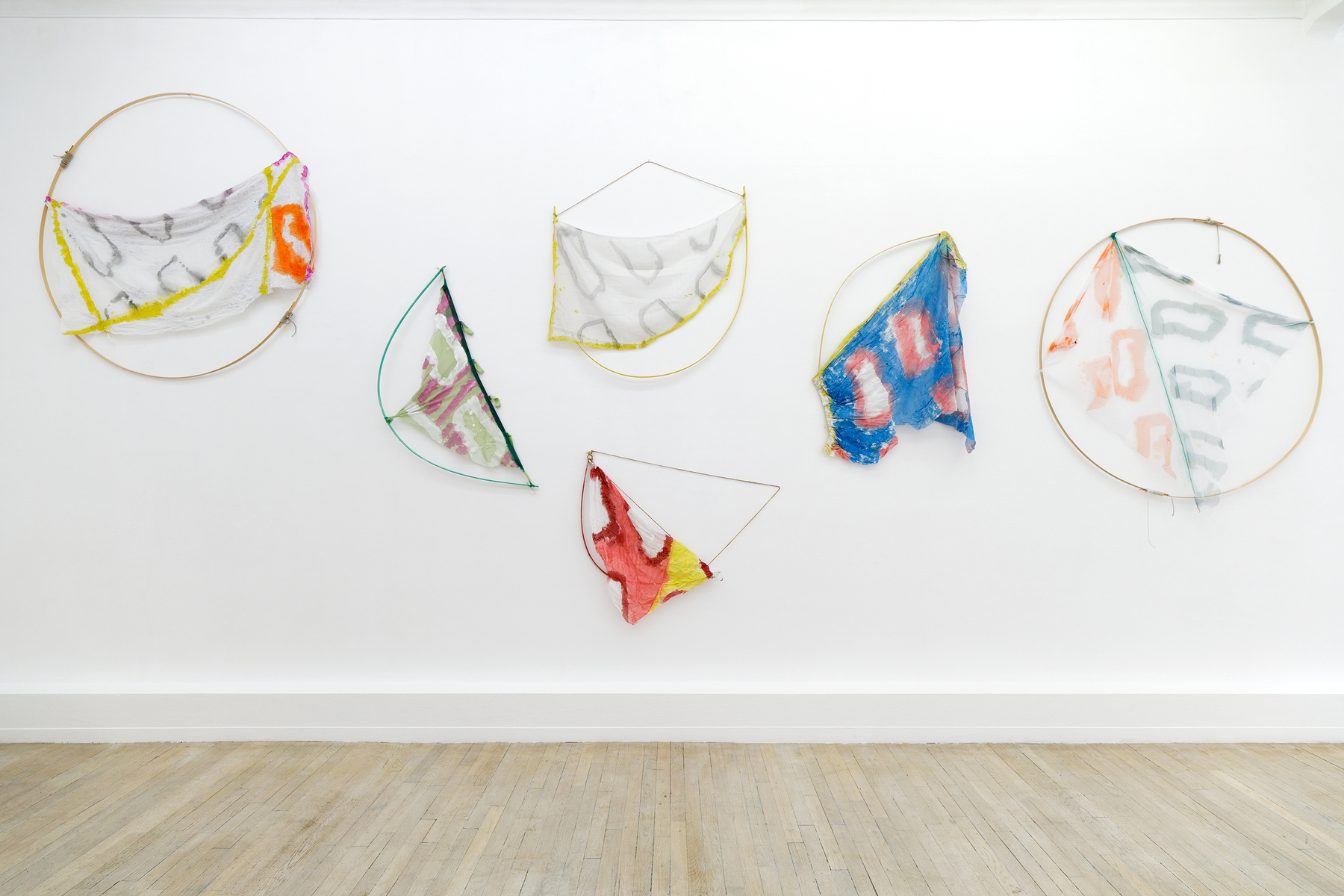 
Only nature shows such virtuosity in the altered repetition of the same. Claude Viallat is mostly known for his famous and stubborn iteration of a same oblong shape – “the first that came up”. He established his system in 1966. Palming the question of topic and signature, he shed light on the process itself. What is left for viewers to see is the painter at work as he repeats a ritual gesture, which only function is self-generation. The artist therefore becomes a shaman warding off an immemorial time which cyclical temporality -expelled from our society obsessed with mechanization- remains only to be recaptured within the microcosm of the canvas. Deleuze’s quote from Difference and repetition here comes to mind: “the once more calm surface upon which float unconnected determinations like scattered members: a head without a neck, an arm without a shoulder, eyes without brows.” However, it would be a lure to stop at this surface punctuated by random shapes. What is a painting? A plane surface, but also a map: a web of strings and knots.

But deconstruction went beyond. Alongside his fellow companions of the Supports/Surfaces movement, then alone starting in 1971, Claude Viallat glorified the material components of painting. Once representative image and fetishism were dismissed, an extraordinary field of possibilities opened up. Raw and unstretched, the canvas also becomes space and volume. From there, and according to the “core-based spiral development” that characterizes his practice, his first objects appeared in 1969. Non-sculptural objects - given that this logical extension of the pictorial space dismissed issues of mass, space and representation- one could go around. From the start, surface and volume have had an intimate, skin-to-skin, relationship. Within this body of work, there are pieces more intense than other, evolutions and periods. But what about masterpieces? Choosing and sorting would feel like an obvious non-sense. And so the artist declared, on the occasion of his Saint-Etienne exhibition in 1974, that his masterpiece was a 30-meter long rope punctuated by blue-dyed knots.

With it, like a magnified facet of the painted canvas, the void shines all around. Ropes, but also nets, strings, hoops and scales. Dipped in tar or pigment, subject to the whims of time and elements. These objects shape a new conception of “crafting”, now considered a dialogue with a matter, which, far from being inert, is seen as a force field. Collected through gleaning, materials are chosen for their aesthetic appeal or their historical load before being assembled based on a logic of balance and tension. Without however bringing signature back, something more incarnated surfaces, guided by a more concrete approach: an ability to cease the right moment, to listen to the impetuosities of the outside world. Through widening the meshes of the net, leaving some slack in the spiral development, the objects express something of a commitment and a being-to-the-world that was hardly perceivable on canvas.

Often associated with paintings during exhibitions, objects gained recognition only later. Despite the importance the artist gave them, the first dedicated exhibition was held only in 1996 at the Ecole Normale Supérieures des Beaux-Arts of Paris. For the greater freedom of expression they advocate, but also the vertical reading they allow in relationship with the sociopolitical and intellectual context of the time, paying them a closer attention has only proved fruitful. And between the time of their creation and that of their showcase at the Galerie Ceysson & Bénétière, the objects have drawn a circular arc connecting two periods of paradigmatic shift. On one hand, the 1970s, which marked their appearance in the artist’s practice, rooted in a burgeoning environmental consciousness brought by the galloping industrialization. On the other, the beginning of our millennium, in which digital euphoria has gradually been replaced by the realization of men inevitable destruction of their environment.

On the complete contrary of the dreams of euphoric dematerialization from the early Internet era, many young artists now reinvest “crafts”, traditional know-how and techniques.

These ropes, hoops and nets exposing the tension between the primitive gesture and the consciousness of the world’s technological future, can for this reason be fully perceived as an anticipation of the “Copernican counter-revolution” that currently rattles the intellectual world. In the wake of the inevitable destruction of the environment, a radical perceptual shift is happening that displaces men from the center. For anthropologist Tim Ingold, environment is no longer only what “surrounds” the body, but an “immense tangle” that “situates the practitioner, right from the start, in the context of an active engagement with the constituents of his or her surroundings”. In Perception of the Environment, Ingold writes: “the pattern of regular movement generates the form. And in both, the fluency and dexterity of this movement is a function of skills that are developmentally incorporated into the modus operandi of the body, through practice and experience in an environment.” And in so proving that Claude Viallat’s porous, virtuoso and almost-primitive objects have probably never been as relevant.