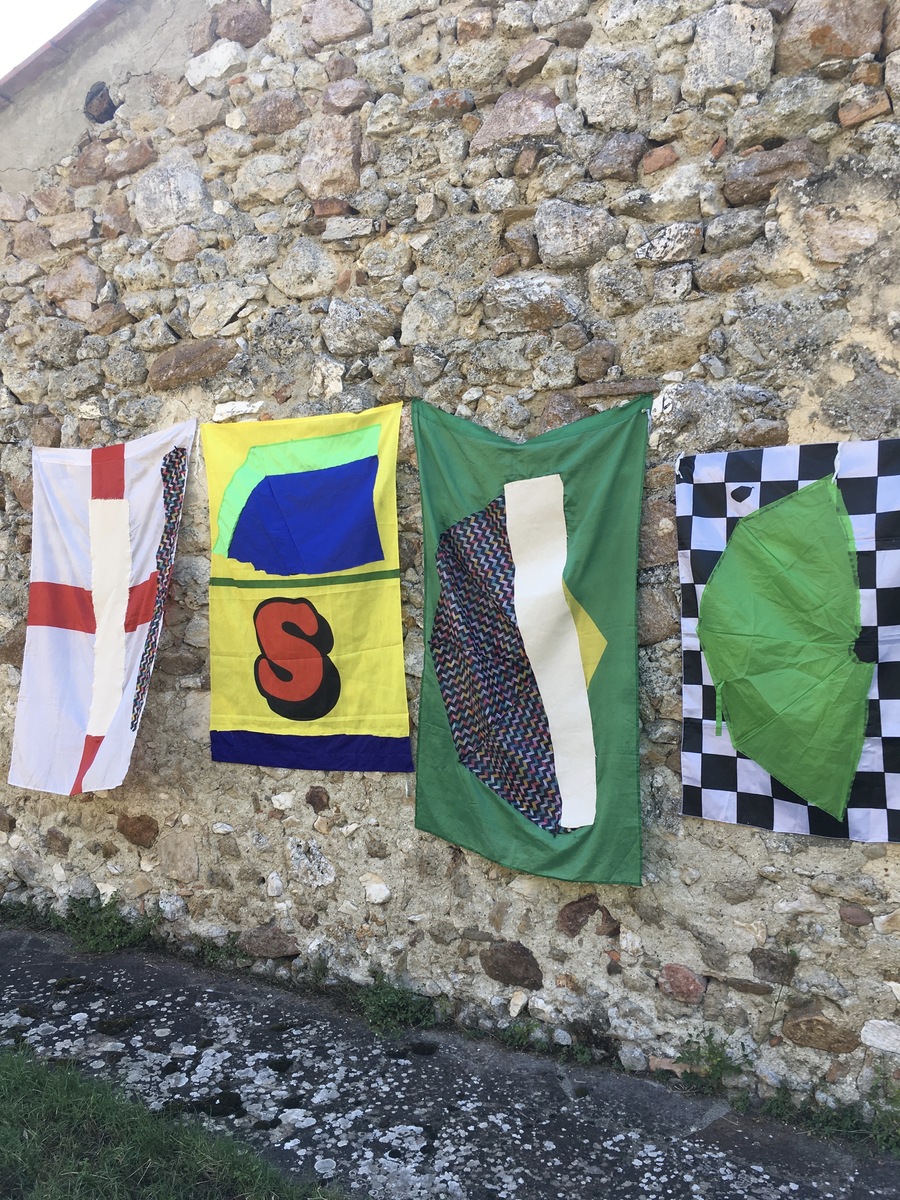 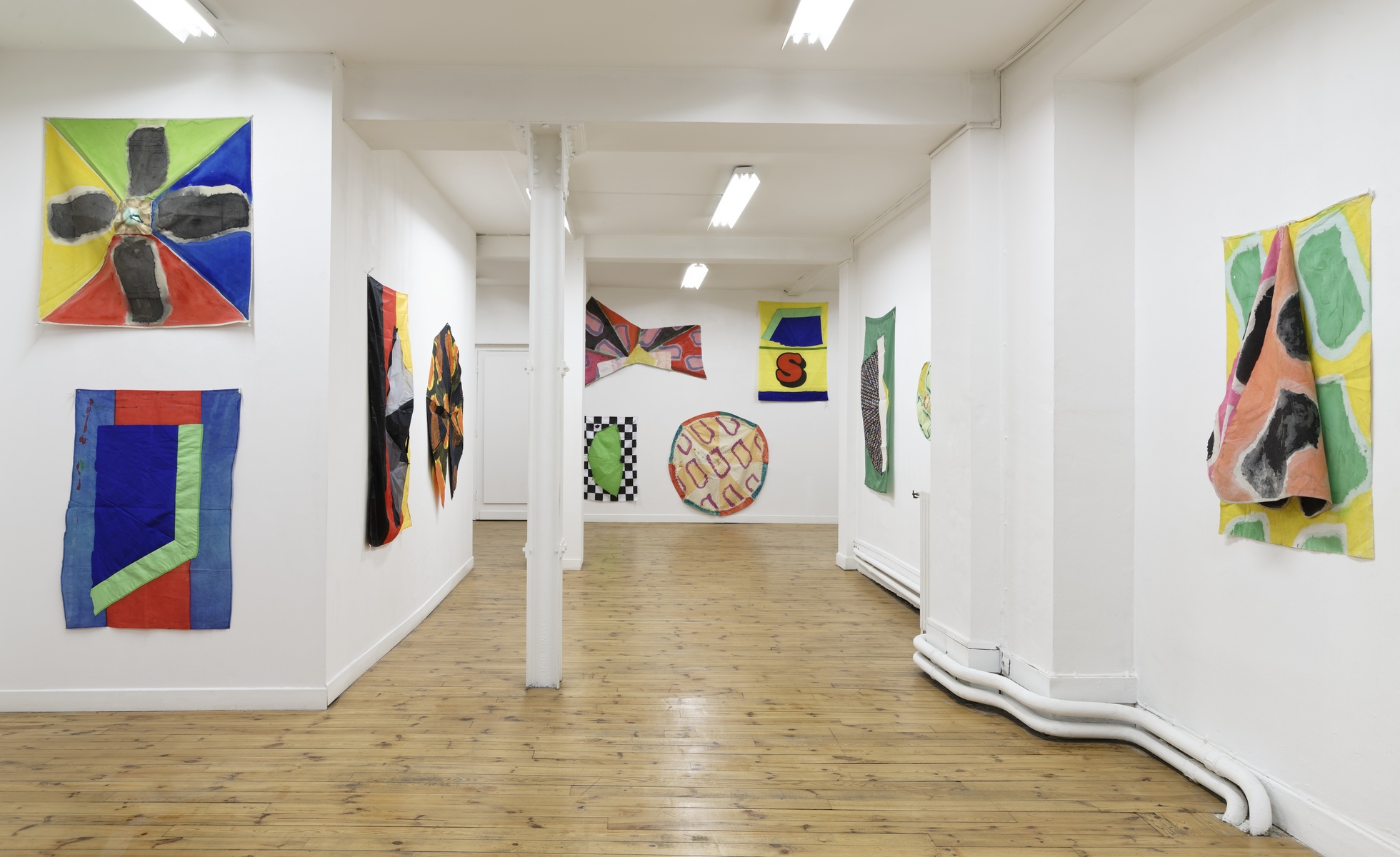 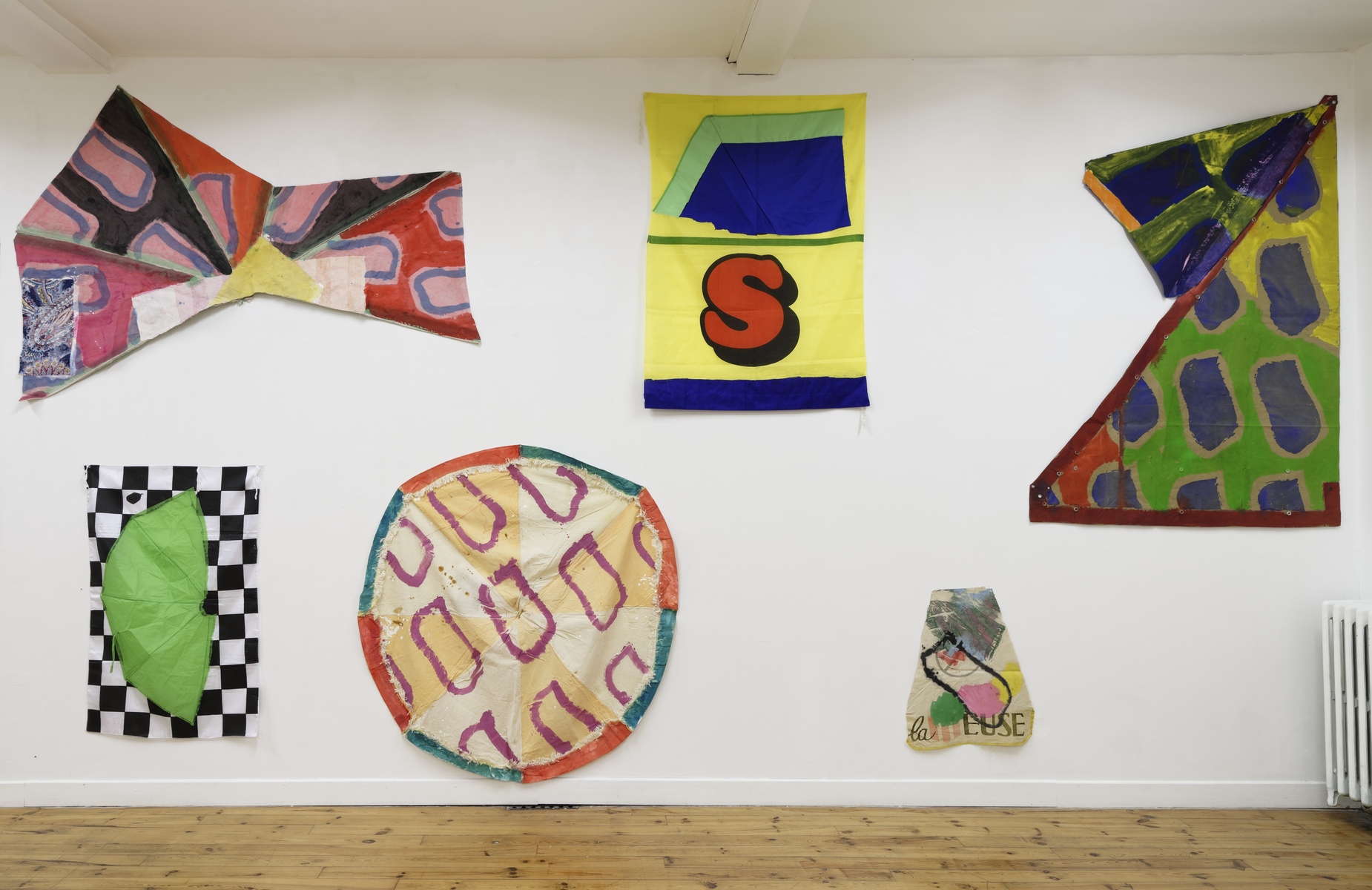 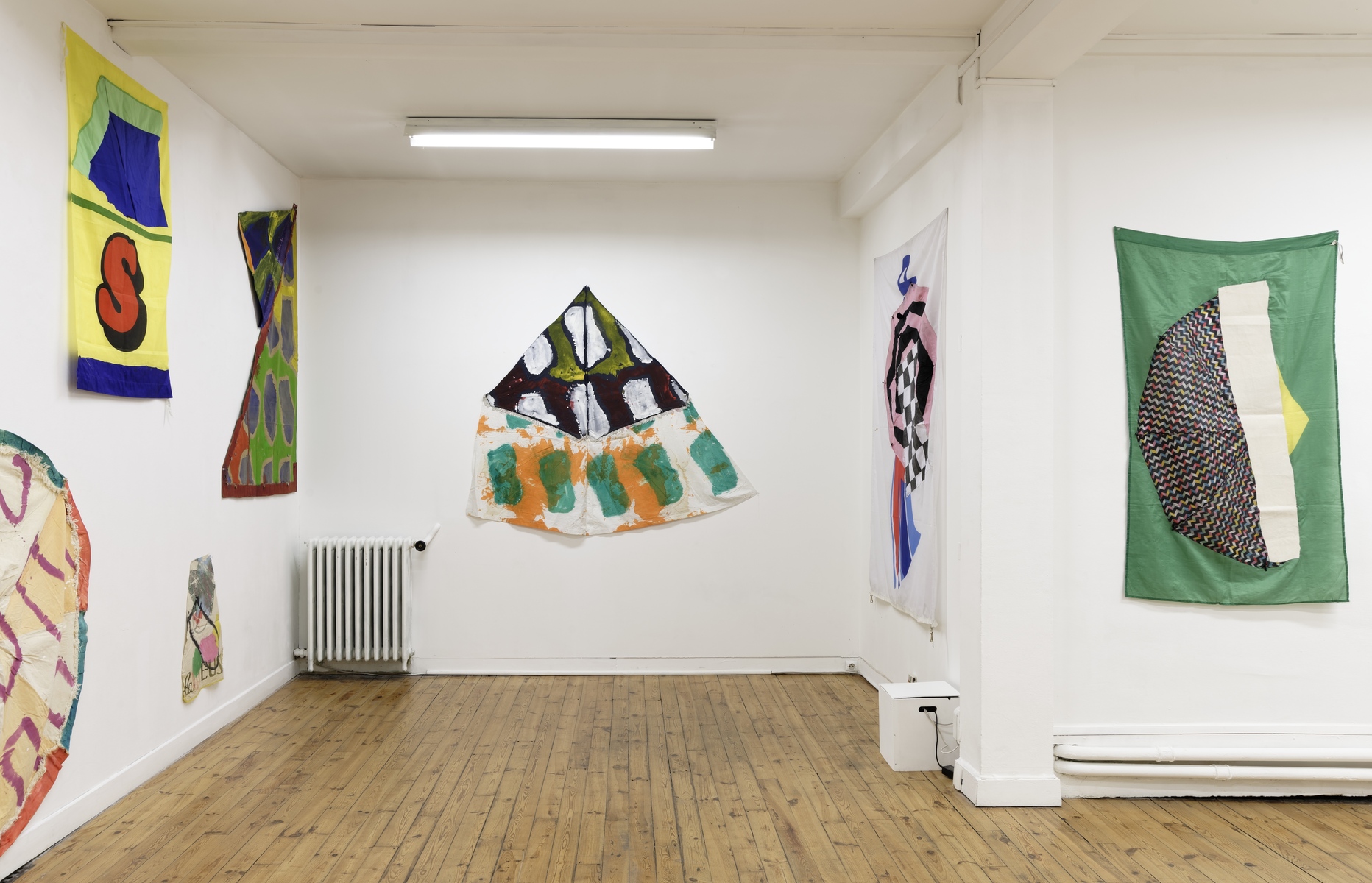 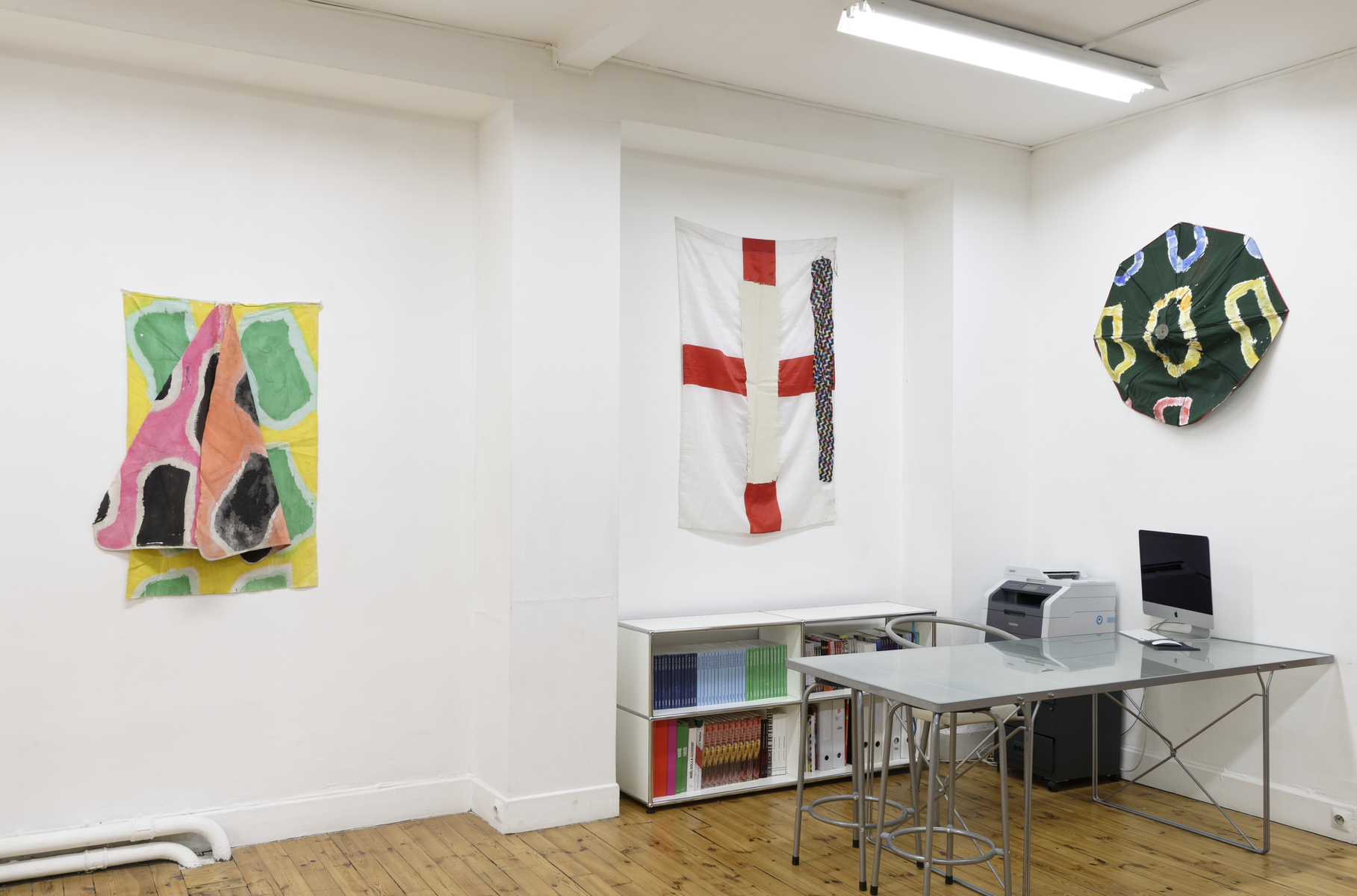 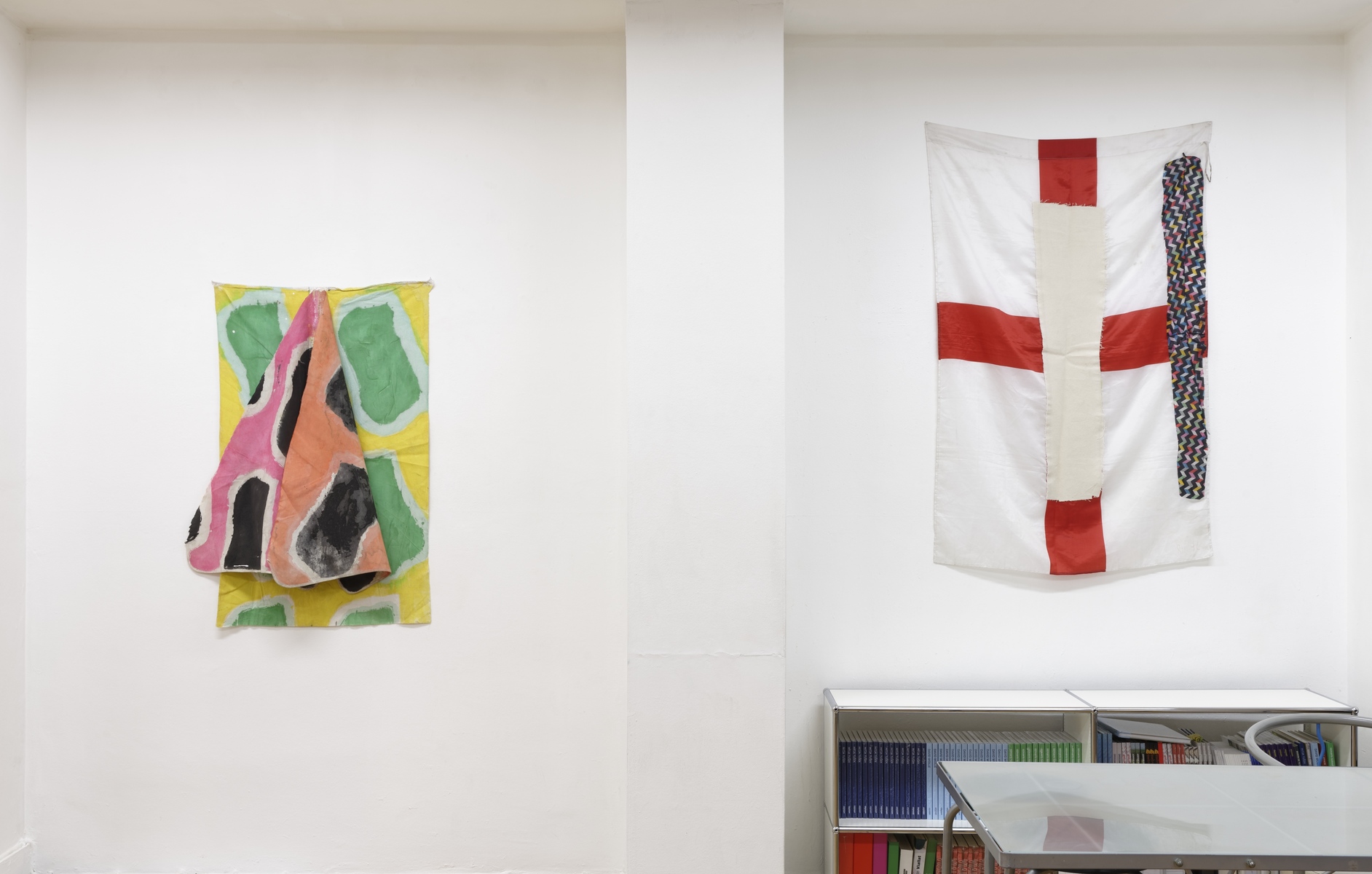 
Claude Viallat and Joe Fyfe share an interest in utilizing re-purposed ‘alternative supports’ as they explore the limits of painting. Conversely, they have a common concern in widening paintings’ means of addressing the contemporary. The exhibition, ‘Parasols’ selects works that utilize umbrellas and sun shades as an element in each of their compositions. Fyfe, who is slightly younger, is a long-time admirer of Viallat, acknowledges him as a major influence and credits him with enfolding geo-politics into the advanced lessons of Matisse: Viallat, he says “has enabled late modernist Euro-centric painting to acknowledge the existence of marginal and migrant societies, and in this way his work seems even more relevant today that it did when Viallat’s first appeared in the 1960’s”.

“Knowing that social issues and functions modify the approach to work and the work itself.” -Claude Viallat, Writings, p.79

My first encounter with a Claude Viallat painting was at MoMA, New York, right after its 1984 renovation. The artwork, from 1979, (Untitled) was a military tent with buckles hanging from it, painted with Viallat’s characteristic patterns, and divided into four different fields. If memory serves, some of the brown color of the originating object was utilized.
I remember a mild fascination. I knew slightly of this artist, but had no reason to give him particular attention. I was not even a conventional abstract painter at that time, but was narrative-figurative. From my perspective, almost thirty years hence, I was a developing artist.
So Viallat belongs to the history of my maturation.
My first awareness of the Support/Surface group came with subsequent time spent in France becoming familiar with French post-war abstraction, up to and including many contemporary French painters, whom I visited in their studios and sometimes wrote about. Through this exposure, my awareness of the painting (the tableau) as a situation where one examines history, politics, ideologies, etc. expanded. I was gravitating toward these ideas in my work, and felt that the interrogation of the composition of the painting, ie. what things they are made up of, made from, in what order, where did the material originate, how are they combined, was an essential part of the narrative of painting. These questions have been of my utmost concern for the past twenty years. The question is, how does the painting communicate its social consciousness? How does it legitimate existing power structures and how does it thwart that perpetuation?
In 2010, I included Viallat in an exhibition I curated in NYC for Cheim & Read gallery, entitled “Le Tableau”, a survey of French post-war abstraction and its influence on contemporary art in the US and elsewhere. Viallat, by then, was a major influence. I credit him with enfolding geo-politics into the advanced lessons of Matisse: he has enabled Western painting to acknowledge the existence of marginal and migrant societies, and his work seems even more relevant today that it did when it first appeared in the 1960’s. Viallat hung his works out of windows, stretched them on the beach, (anticipating installation) and painted on awnings, tents, and other temporary shelter structures in order to make reference to migrant, marginalized cultures. I read this “nomadic look” as a very direct way of enfolding disparate cultures into those of the post-industrial world via enhanced readings of the tableau. I find his lightness and nonchalance to be in perfect balance with the seriousness of his intentions.
We were both in a group show in Belgium several years ago. Referring to one of my works in the exhibition, he told me, through a translator, “I work with umbrellas, too.”
Being that we both utilize re-purposed ‘alternative supports’ as we explore the limits of painting, I suggested that we share an exhibition of individual works that incorporate umbrellas, or parasols, with the gallery we share, Ceysson & Bénétière. Voilà.