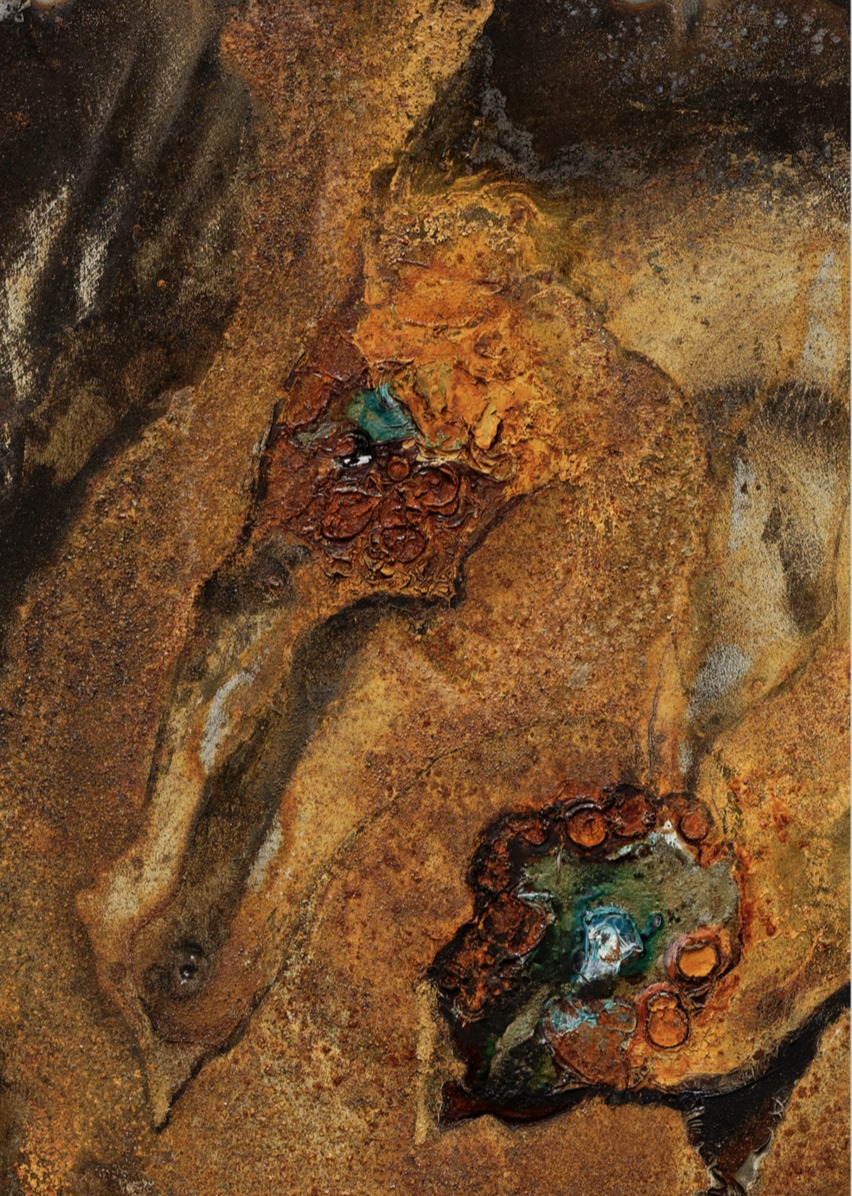 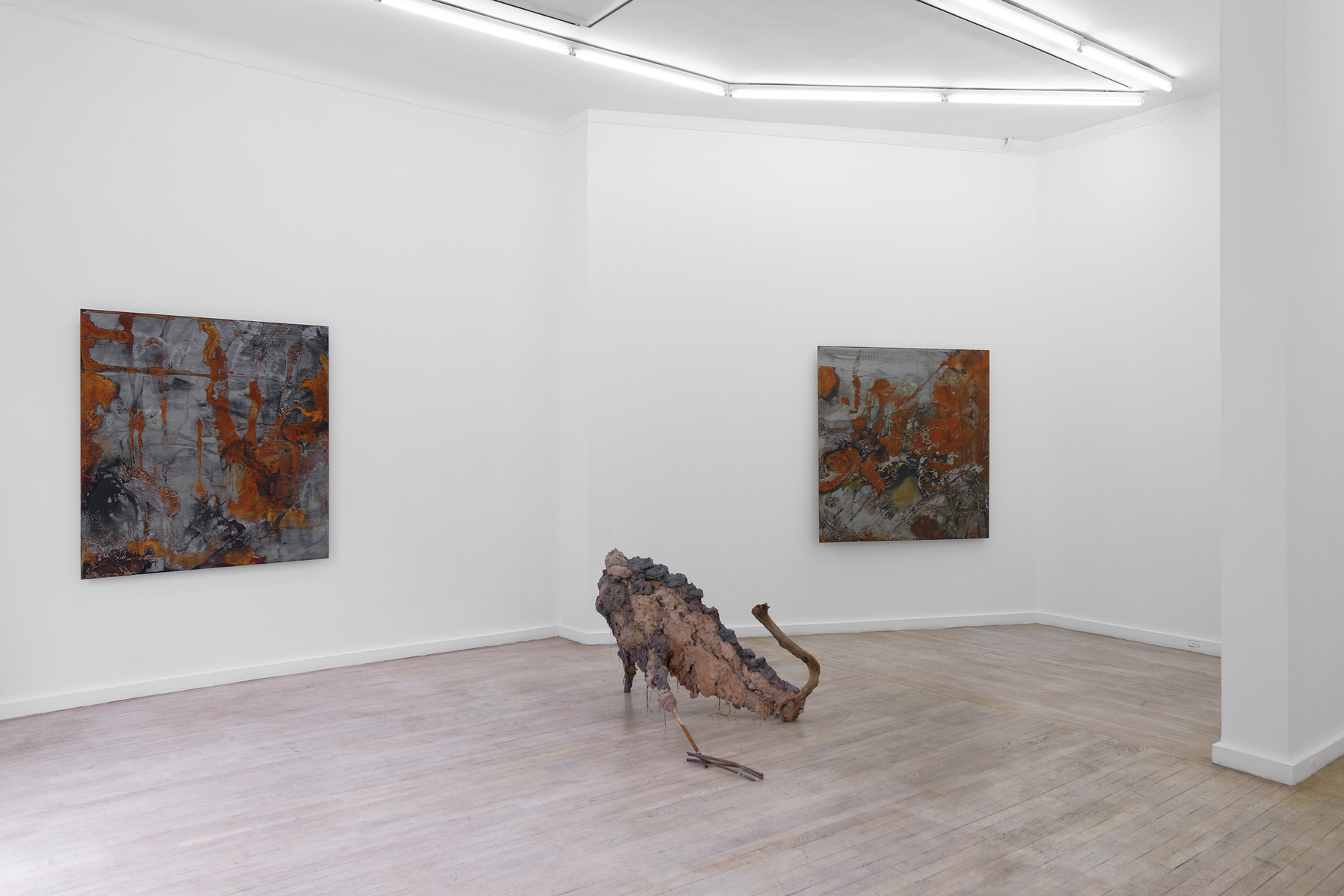 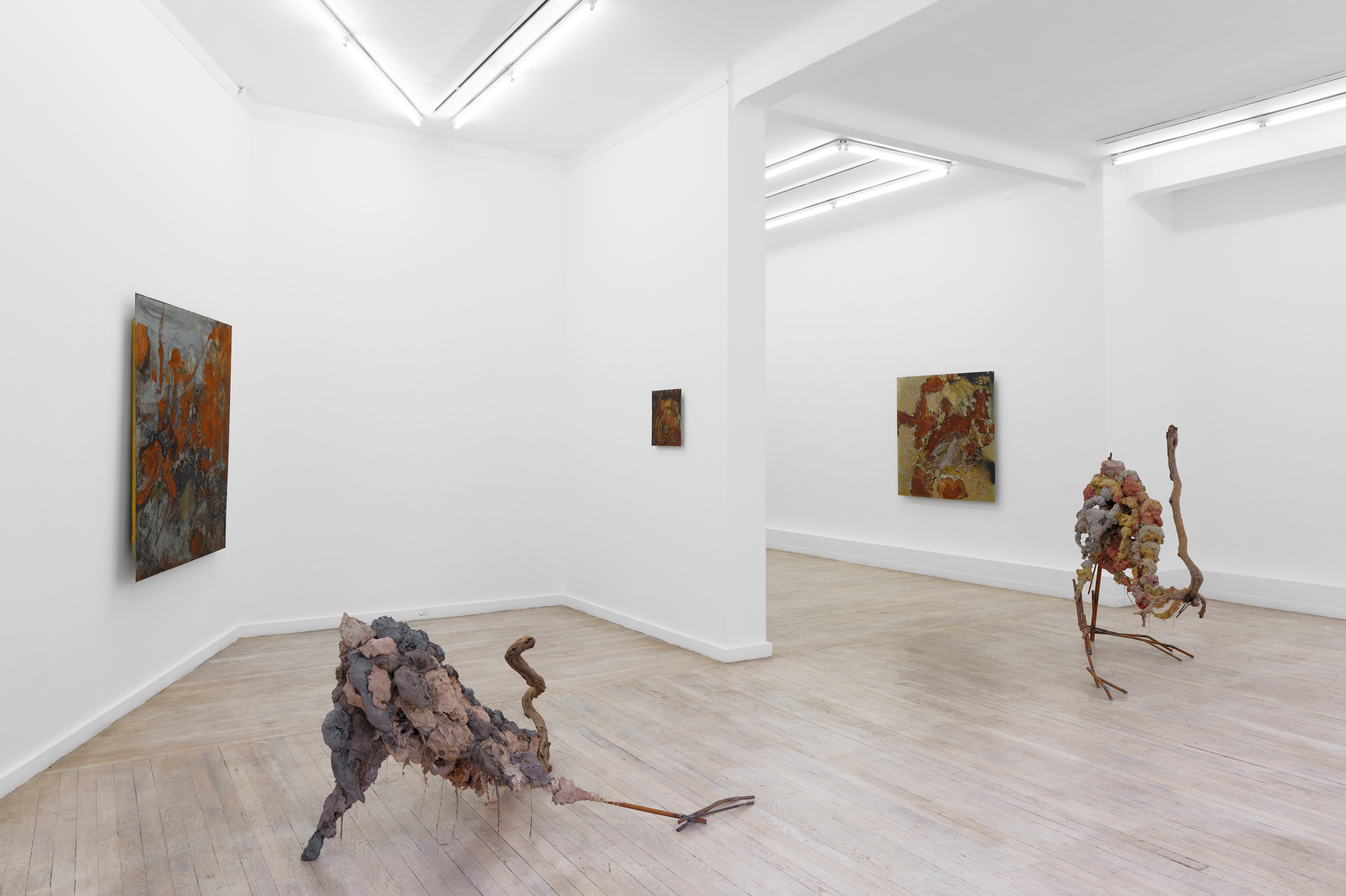 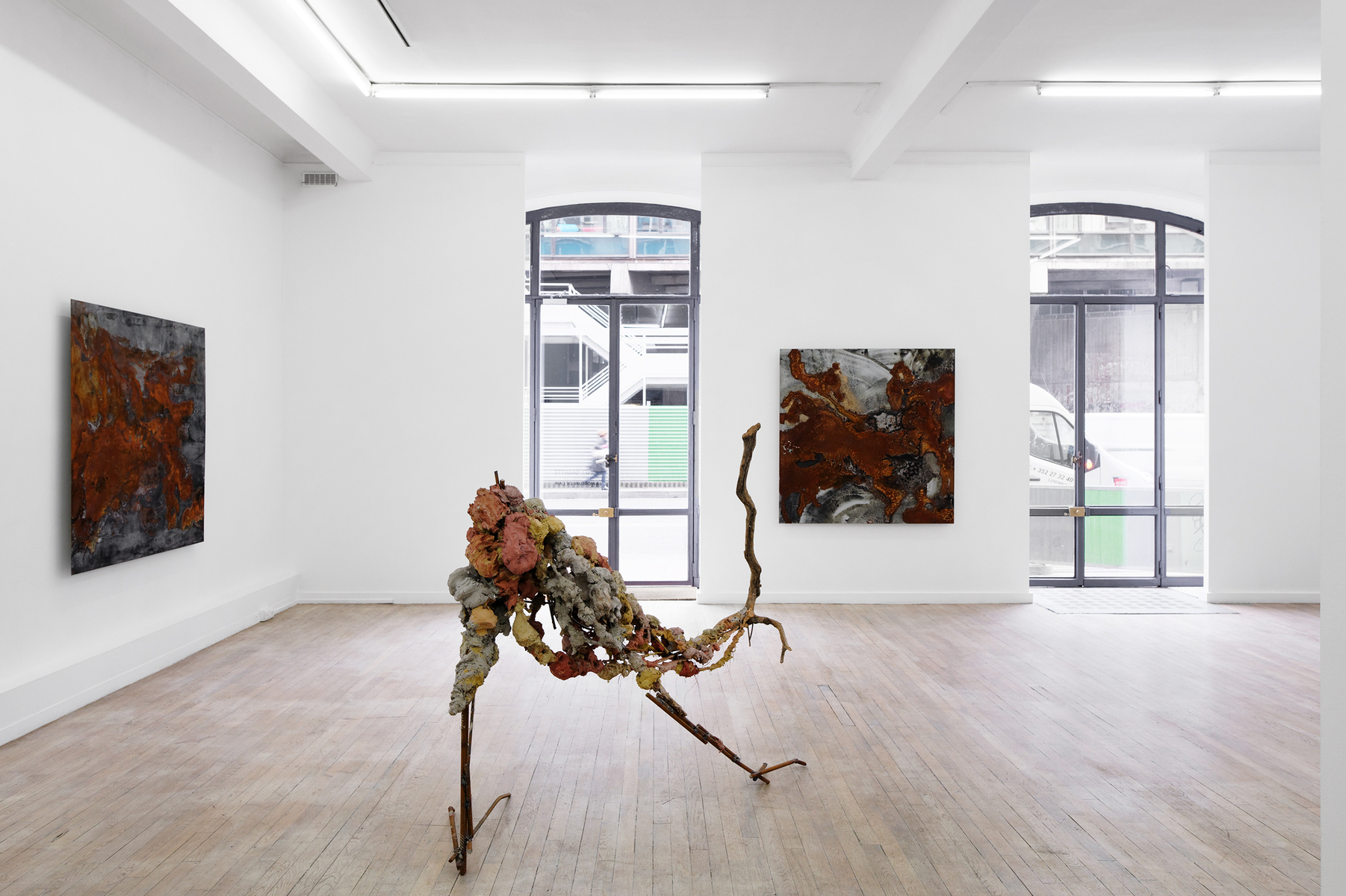 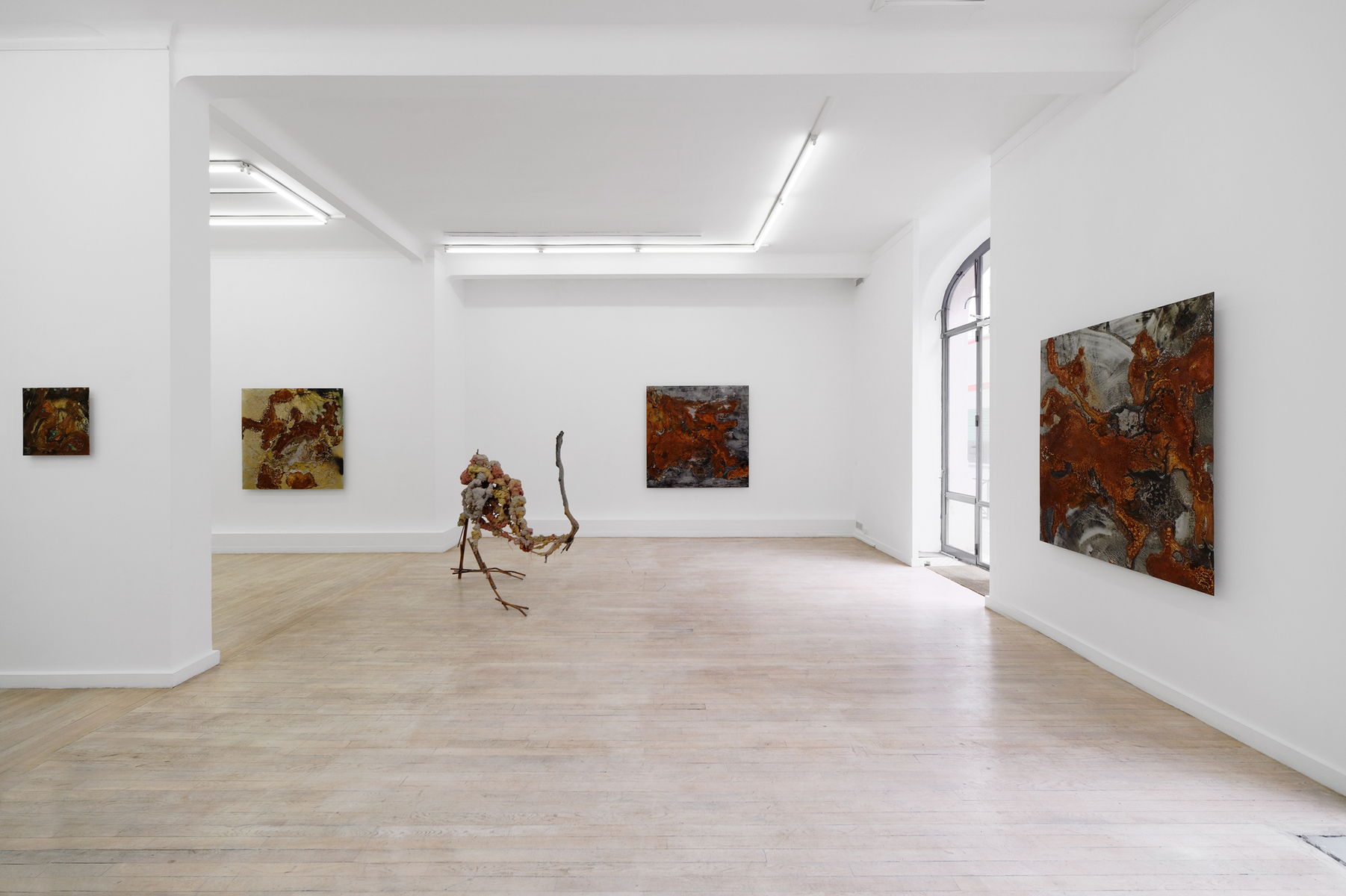 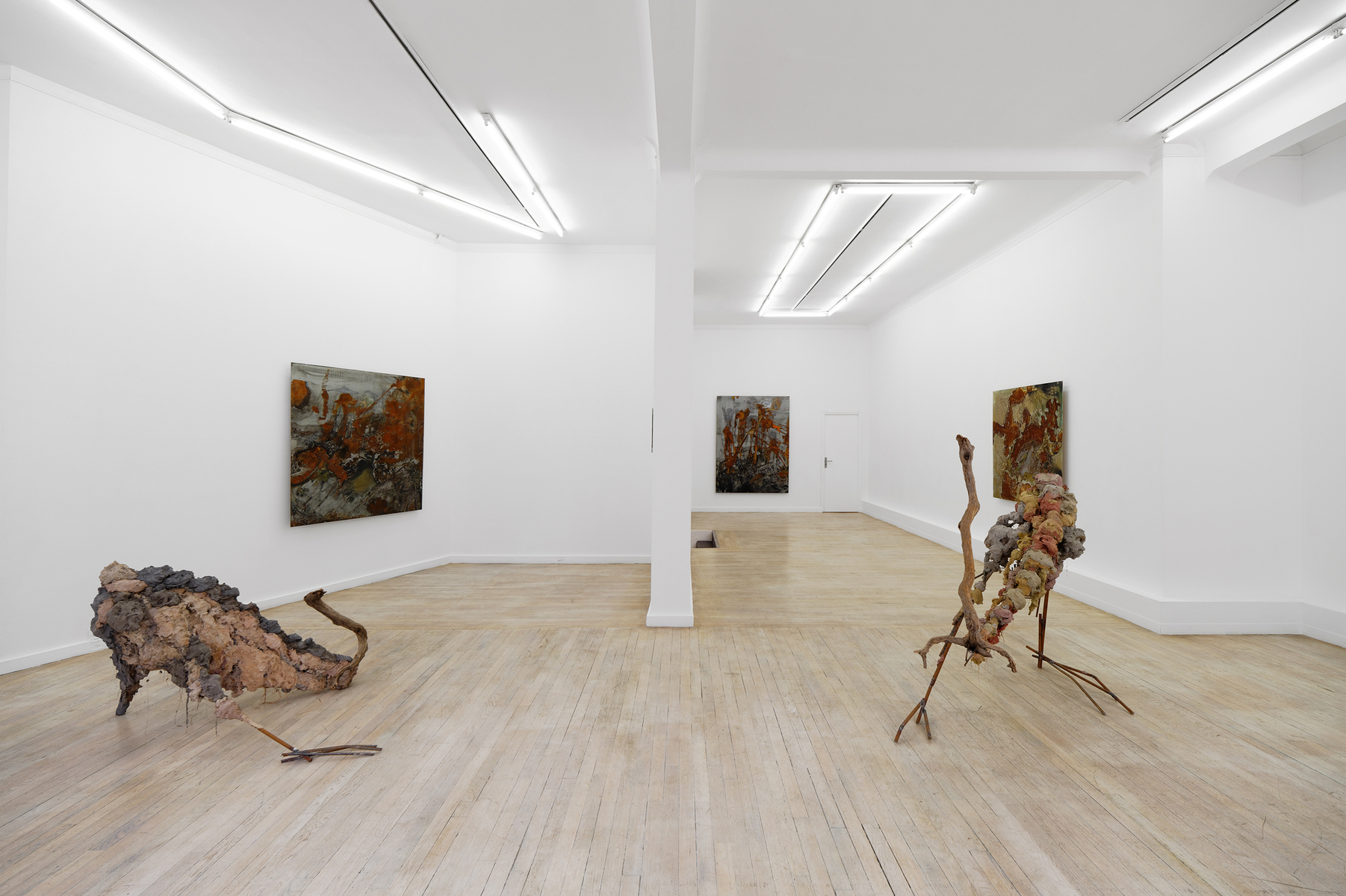 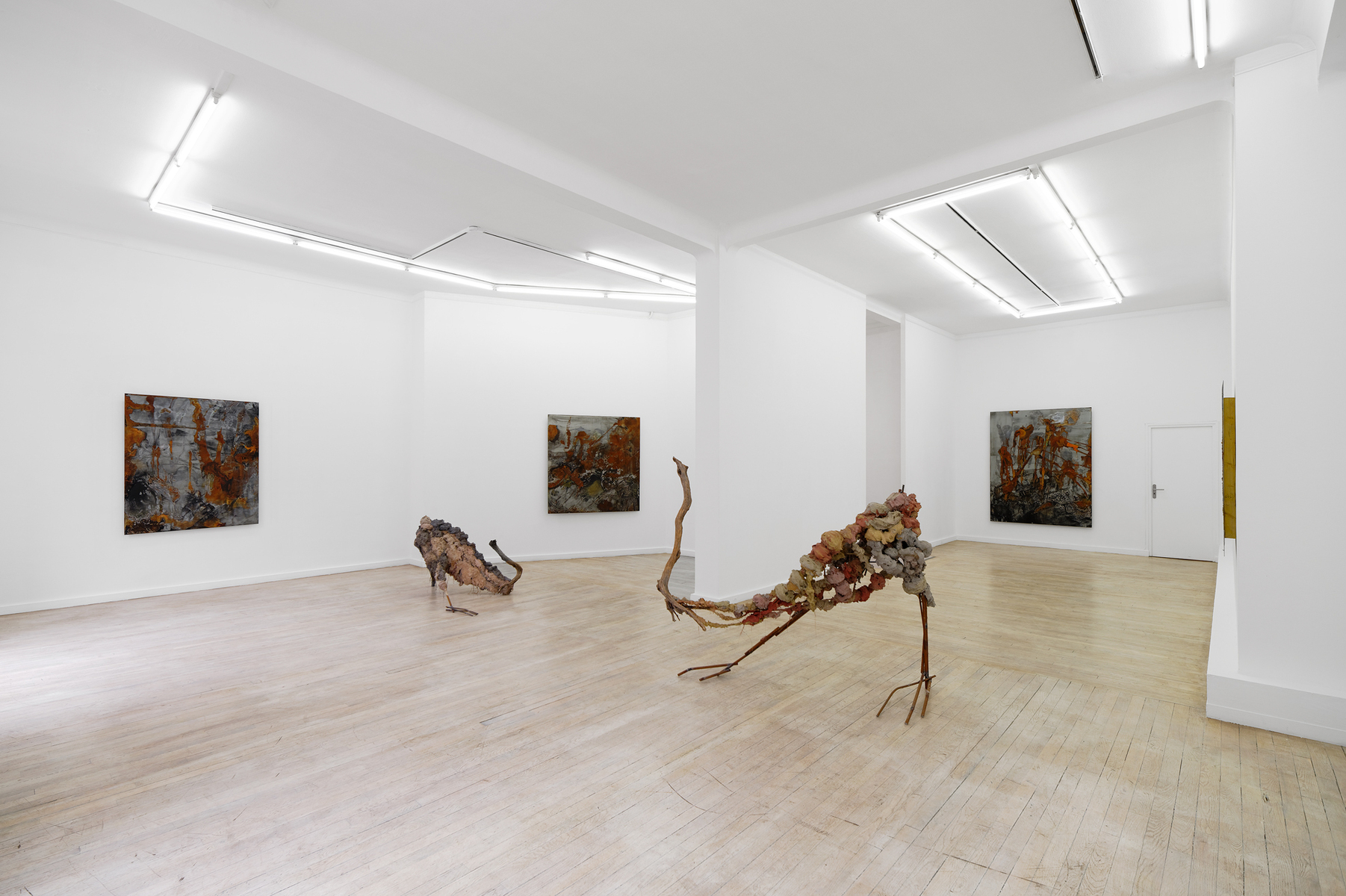 
Thirty thousand years, those hands, black.
The refraction of the light on the sea make the stone wall tremble. Marguerite Duras, The Negative Hands, 1979
Lionel Sabatté never stops awakening origins. Thus, here we will come across primitive creatures, evoking cave paintings, and there some rare birds captured on the granitic walls of rock art, seized in the momentum of their quartered wings, among other forms of unknown life that we can only guess at. These creatures of good omen are stalked in the material itself, appearing suddenly, sometimes in their destruction, in volcanic, sulphurous concretions, and some masses of craters. The works that face you are metal paintings. This technique gives the artist what he was looking for in painting, when on the two- dimensional surface he was already making opposites couple, creating organic explosions, astral convolutions, and puddles of acidic oil. But here, the gesture is more direct, incisive, concretely corrosive, offered up to that which cruelly devours the plate, making it speak, express itself, in its rust. The colours are those of iron oxidation, an orange-brown or russet; the colour of something bitten by acid, a slow steel chemistry in development. The pulsations of what lives are looked in the eyes, for what they are, without a glorious paean to eternal nature. In reality, it is the opposite: the energy of life is always an energy of death; the two go together, in parallel, infinitely cyclical. In breathing, we commit ourselves to disappearing: the breath that gives life is also the slow consumption of our vital energies. Anyone accepting not to breathe would already be abolished. For we must breathe to live, and to die; that is to say, to continue to address ourselves, to beseech, to paint, to create. These “beginnings of figuration” arrived in looking for bears— those creatures with dense and dark fur, their feet firmly anchored to the ground, suffering extinction—says the artist, opening the frail passing of his wild bestiary to the confusion of kingdoms. These surging forms have called for the bronzed bite of steel. The excavated surfaces on which they seem to boast abstractly are also coral, lagoons of the South Seas, still distantly fantasised, that come back in unconscious waves, reflecting the turquoise sky of which they become mirror maps; while the stalagmites and stalactites condense and petrify what remains, in walls hollowed of time. The gaze finally stops on cement birds punctuating the space of the gallery by their dynamic thrust and their stopped progress, a progress we would like to accompany, emulating their conceivable and possible flight.

Léa Bismuth is an author, art critic, and independent curator (in particular of the cycle of curatorial research she initiated: the La Traversée des Inquiétudes trilogy, freely adapted from the work of Georges Bataille, presented at Labanque in Béthune from 2016 to 2019).

The title of this artist’s solo exhibition was chosen following the writing of this text.