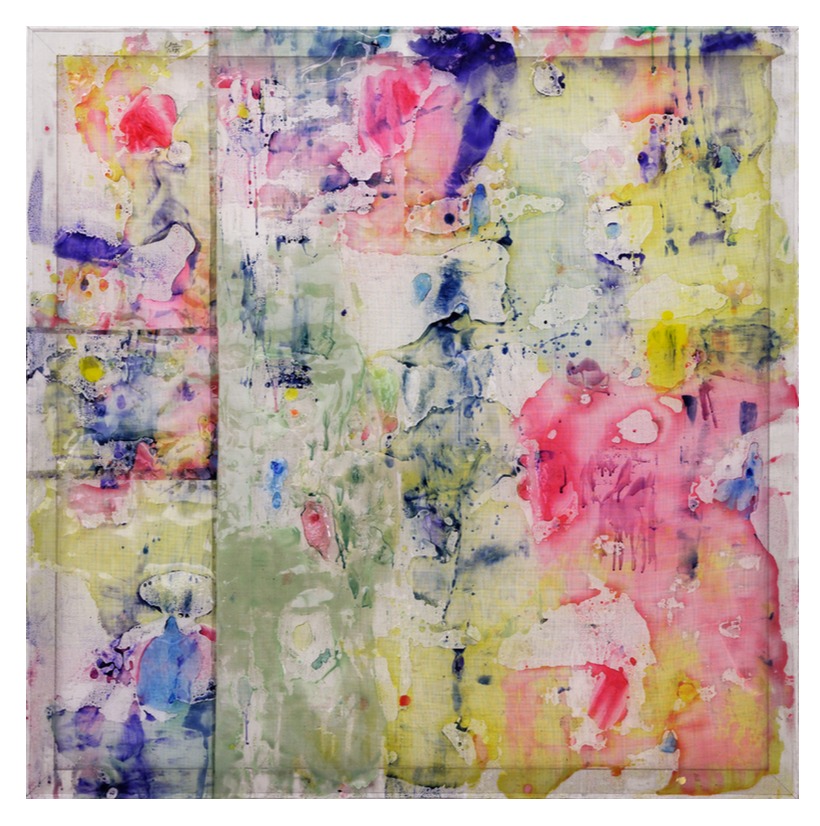 
Louis Cane is one of the exponents of the last French avant-garde movements, the Supports/ Surfaces group founded in 1970. During the 1970’s, the artist analytically explored the manners of presenting the « picture », considered as combination of coloured frame/field. In space, he presented his research on free canvases, cut, folded, stapled, vaporised, as in the exemplary Sol/Mur series, through which he conducted a clear and conceptual reflection on the place of the passage.
His way of painting subsequently broadened out, throwing out, in other ways, questions about painting in the so-called post-modern era in which it was supposedly no longer possible for an artist to work « after » someone else.
Using resins on netting stretched over a metal frame, as in his Peinture(s) vraiment abstraite(s), the artist has since the late 1990’s revived the structuralist and analytical thinking of the Supports/Surfaces years, which is today being examined closely by the young American scene. And these works are indeed reminiscent of the different components of the picture/object: the colour, the frame, the structure of the stretcher and the canvas in the form of a metal covering. The translucent coloured resin and the mesh support, are transitory media. There is no pretence of depth, the coloured screen is no longer an illusionist space, and the window actually opens, beyond the depiction or presentation. The passage reveals the stretcher and the underlying space. The constitutive opacity of the picture is thus spurned. The applications of resin seem suspended over an evanescent plane and themselves are traversed by the light that reveals them, that projects and forms them into coloured shadows on the surrounding space. The resin layers, like colourful interfaces, open a reflection on the diaphanous, which literally lets one see through. Louis Cane writes elsewhere of these resins that they are « coloured air ».
In his Peinture(s) vraiment abstraite(s), the reddening surface is glazed with a translucent material and, like a lacquer, is the source of unpredictable flashes of light. Moreover, a network of small horizontal colourful touches encased in a transparent resin layer punctuate the surface of Peinture vraiment abstraite, like reflections on a watery surface. In the double meaning of the term, these paintings are surfaces of reflection. These surfaces that are both porous and reflective, are spaces of interval or mid-places, between two waters that put bind together the front, the inside and the outside. The water surface is the paradigm of this joint intersection and Louis Cane never ceases to make use of them, through coloured resins or the Nymphéas series begun in the late 1980’s. Of course the artist reveals an affiliation with Claude Monet, a painter revealing luminous events and the father of abstraction. « Abstract Painting is its element here: no narrative or figurative depiction, just the depiction of feelings and emotions contained on the surface of the picture », writes Louis Cane. Beyond any visual pleasures, lacquered with acid-coloured resins that seem still ductile, the Peintures vraiment abstraites also produce haptic or taste-based sensations. The artist also evokes in them the memory of jars of barley sugar. This is an aesthetic experience whose etymology reminds us that it is always a matter of sensations.