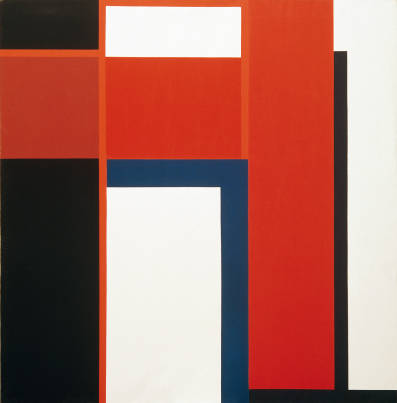 
During his brief career, Marc Devade (1943-1983) never gave up stretching his canvases. He aimed less to deconstruct the painting than to affirming the flatness of the surface by using inks that stained the surface through its entire entire thickness. Playing with its materiality, he worked to make the canvas be forgotten, by emphasizing color. The light veils of color which penetrate the canvas seem to be born of its depths and seem to appear, to be revealed by the ritual of the painter’s work on the surface accomplished in the luminous vibration of a sublimated color. Chinese painting provided Devade with an escape from the realm and from the history of Western painting, which for him had no future. His strong theoretical stance and his attempt to renew with the spiritual without invoking religion are traits that position Devade as perhaps the most intellectual of the Supports/Surfaces artists.