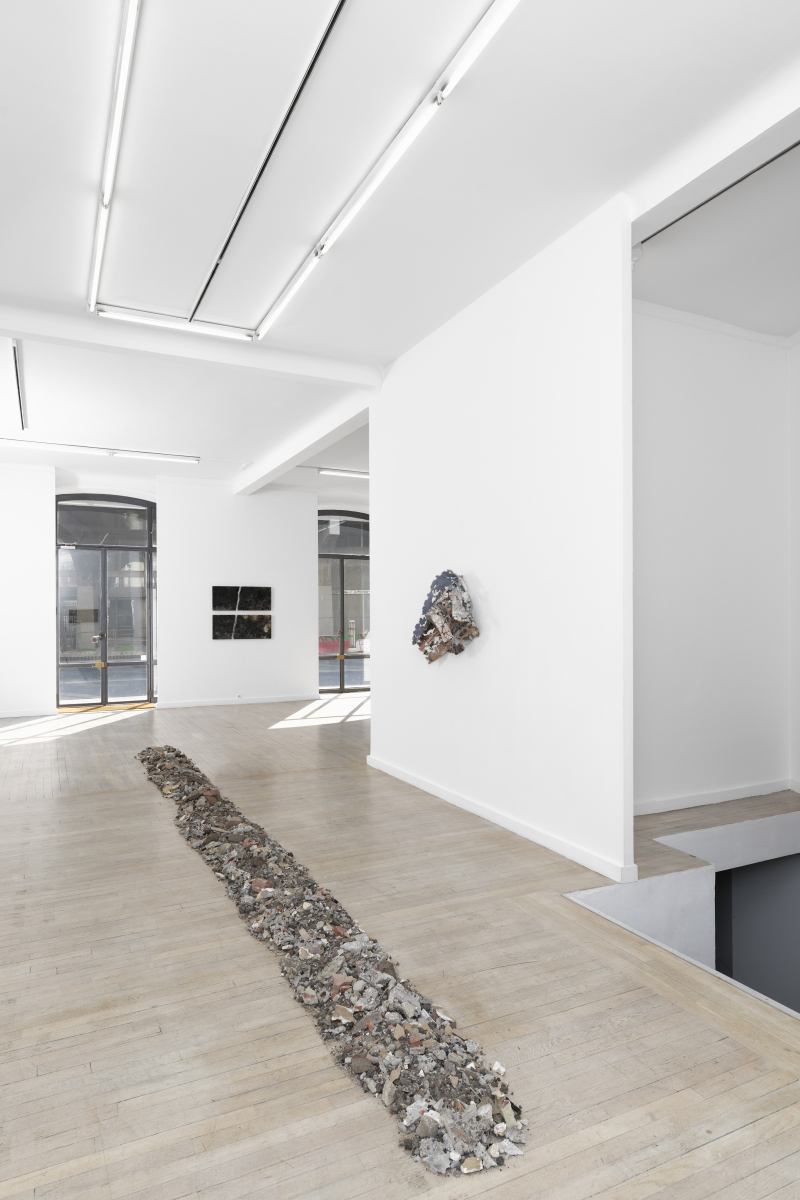 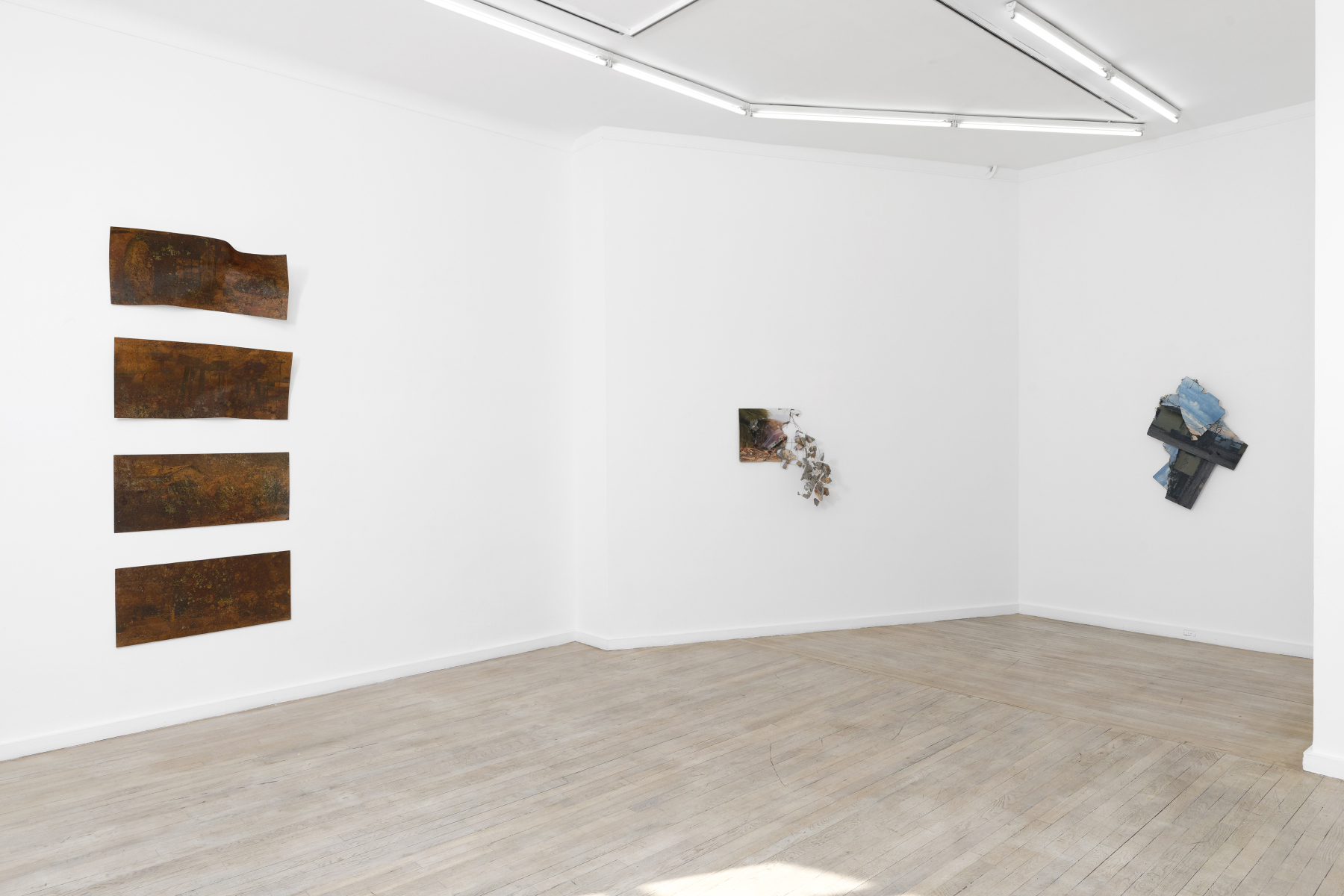 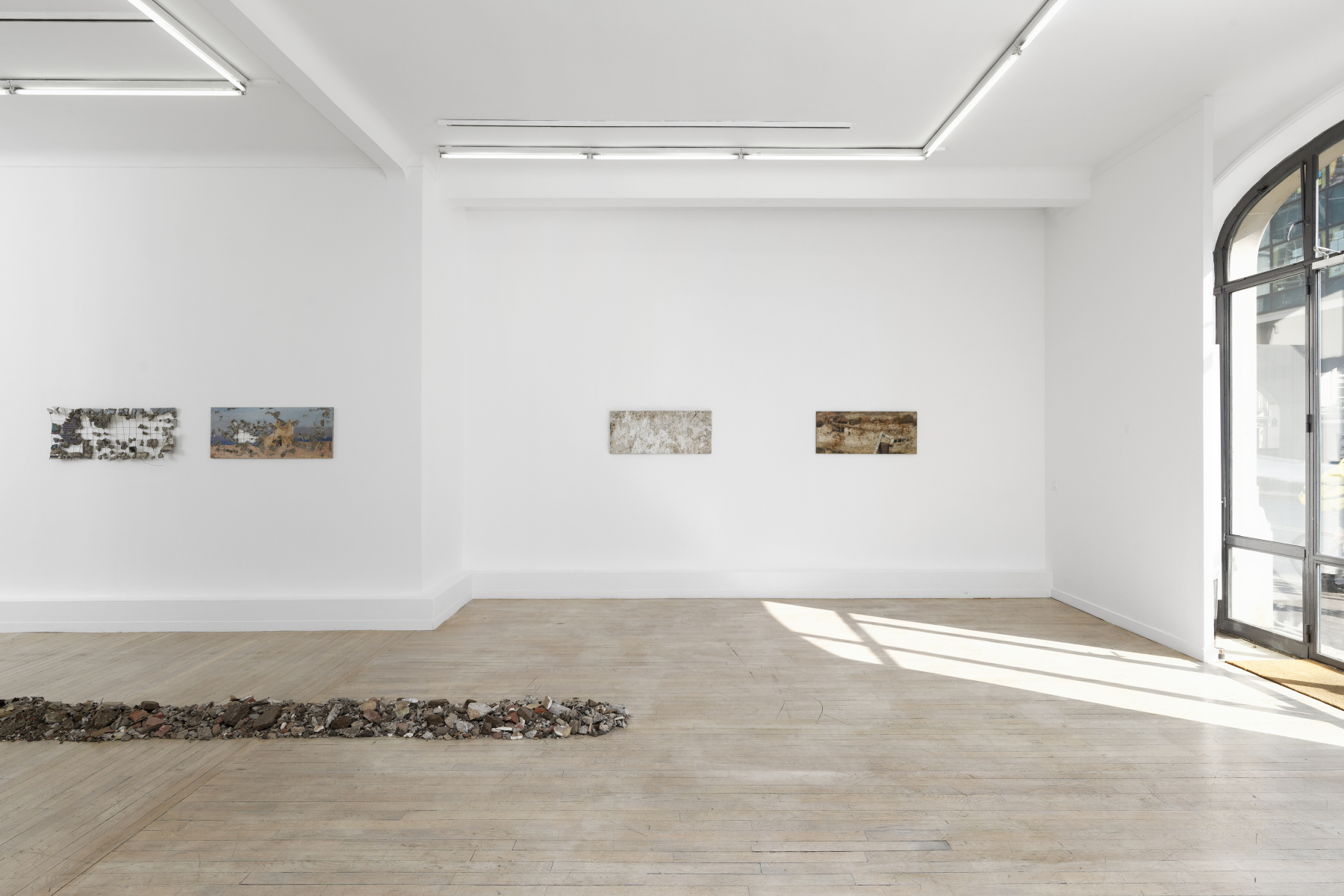 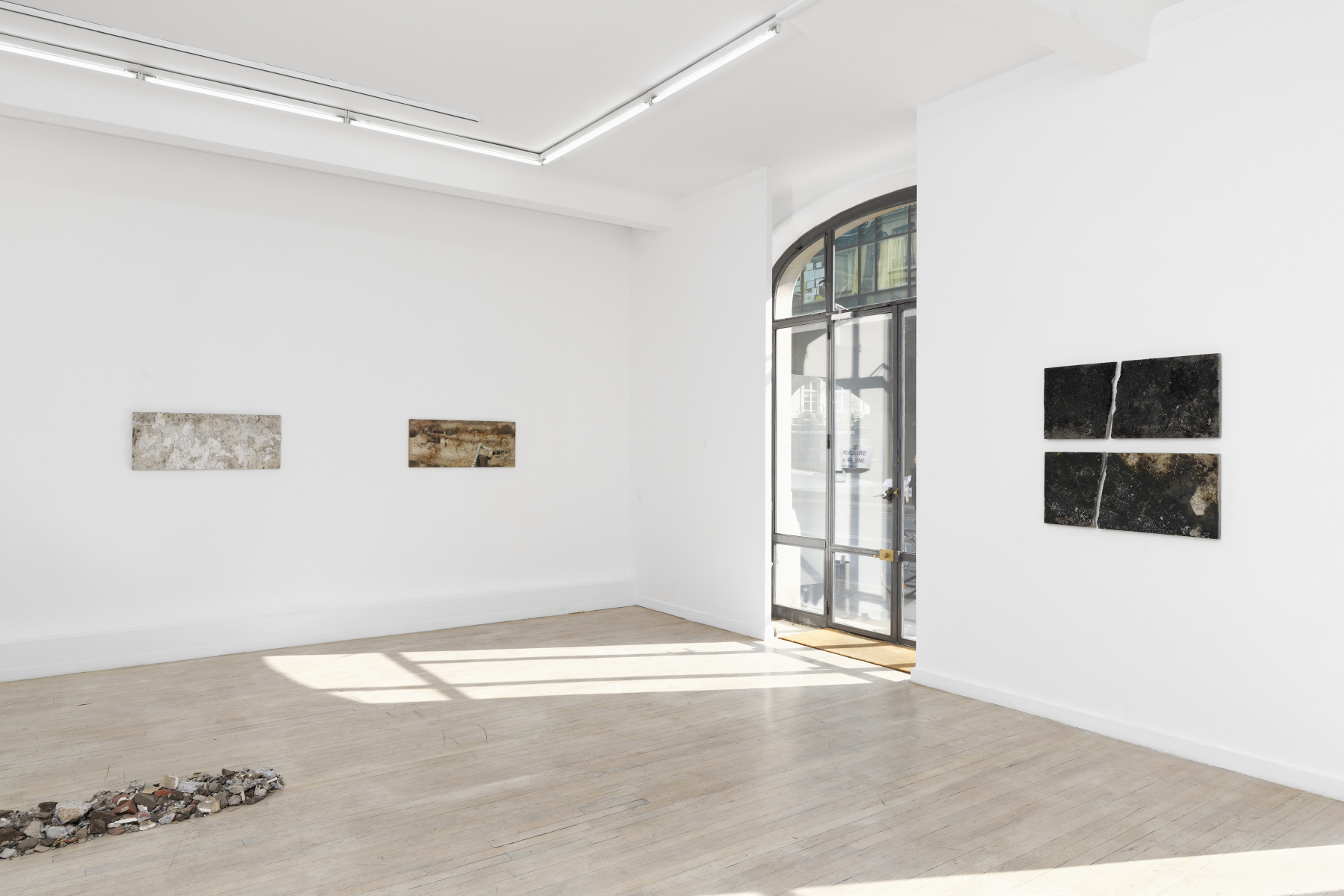 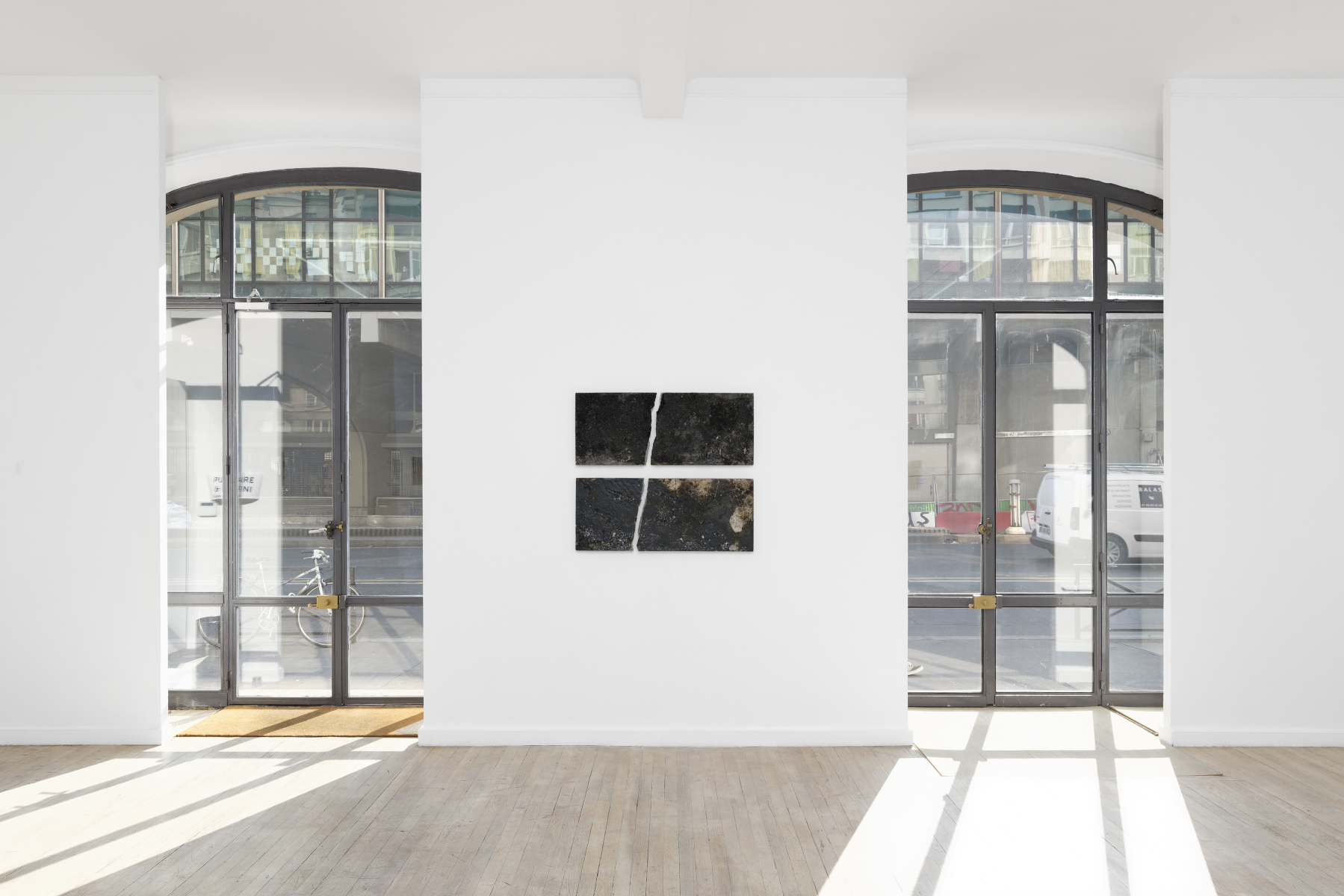 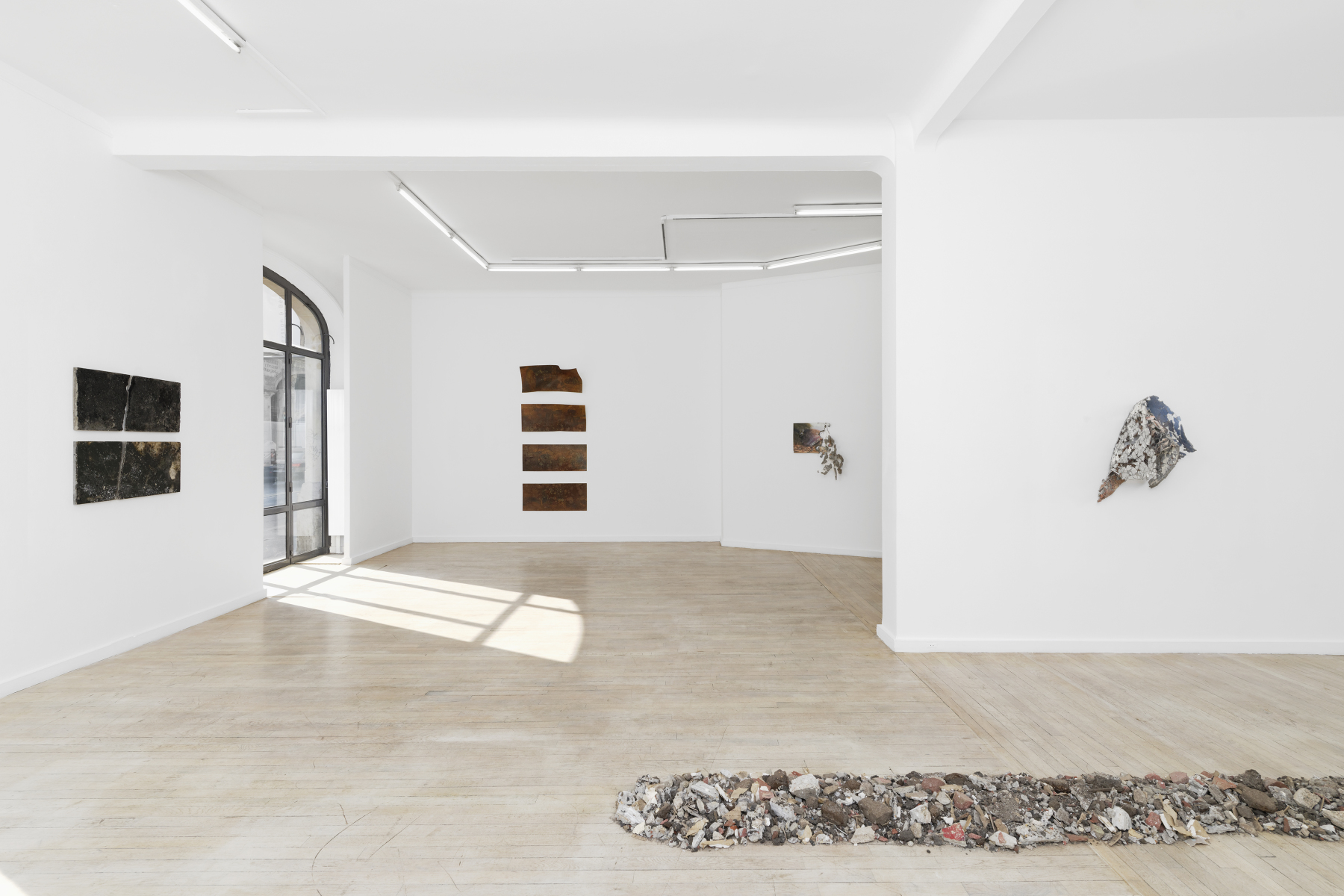 
The project emerged during a residency Florian Pugnaire and David Raffini did at the Flax Foundation of Los Angeles, during which they explored the abandoned lands and urban legends of the American West. It gave way to Driving Trough, a movie staging the persistence of a protagonist in collecting fragments of ruins to build or rebuild something. True stories are mixed with fiction in a poetical form while the archiving process remains in the background. The movie transforms a mythical post-apocalyptic atmosphere into a documented story in which materials appear once again loaded. However, the impact of the movie no longer relies on a fictional “one-object show”, but instead on the determination of the protagonist to resist the disappearance of the world.

His gestures are precise and repetitive. Primitive. He collects rubbles, materials, and pieces of history that he first transforms by accelerating their deterioration process. He seeks, works, and labors while walking on an endless path. Rubbles are crushed, sometimes entirely. The lifeless matter becomes raw, the origin of one last creation.
The movie also tells a story of sculpture and painting. With the road first, which is in almost every frame. Subtle quote to Carl André’s ideal sculptural work, the road is a key to the work. Here, it physically and intellectually manifests the weight of matter as well as the extent of a sort of probably utopian quest. The protagonist follows it, but also wears it up with his own hands in an ultimate and inescapable face-to-face in an immense yet closed setting.
Central themes in the research of Pugnaire & Raffini, materials and their state of transformation seemingly relate to an expected temporality, with a past, a present and a future. However, in the first scenes, the presence of the protagonist both on the road and in his studio, as well as his soliloquy, start casting a doubt. The landscapes seem like abandoned sets at the end of a film shoot. The protagonist recalls them by resurrecting bribes of past stories. In the end, distinguishing reality from illusion does not matter.

Here is the information: Fahrenheit 134. The highest temperature ever reached on the surface of the planet nearly a century ago, in the Death Valley (56,7°C). On a desolated urban background, with sadly magnificent sunsets and landscapes dried out by a scorching heat, the story builds around the truths and legends related to the territories visited by the protagonist. Thanks to the attention paid to them, these tangible and sensitive traces turn into monuments in themselves.
The debris thus collected gave life to a sculpture, which stands like a stele in the exhibition space. A memorial made of rubble and dust, fragments of history captured in stone; a process confronted to its own end. At the same time, an archeology of the future is shown through photographs. Shots representing a lost world, precisely defined but destructured due to the erosion of their medium. Images of modern ruins become shadows of themselves through the destruction of their constitutive materials. Between fiction and archive, Florian Pugnaire and David Raffini create a hybrid form of storytelling through both movie and installation works. The artists also stage themselves in an obvious mise en abîme suggested by the protagonist, which labor undeniably evokes creative obsession. Time is disrupted, as well as materials, and movement is broken down. Whether in the experience lived or the final reconstitution, raw materials are harassed, and sometimes strained, but the process takes over to reach a memorial essence, this point when waste turns into relic and vestige, into a monument.