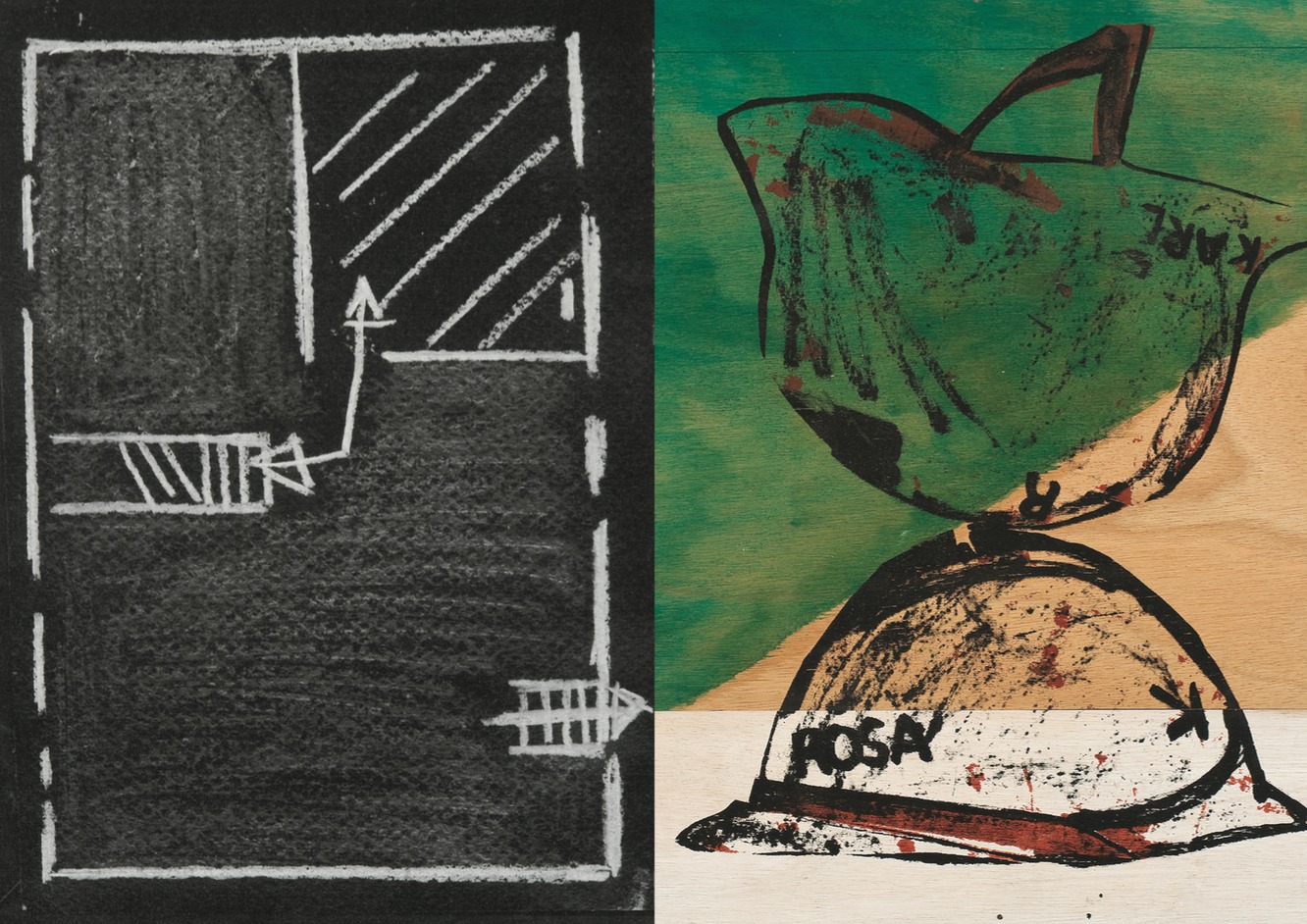 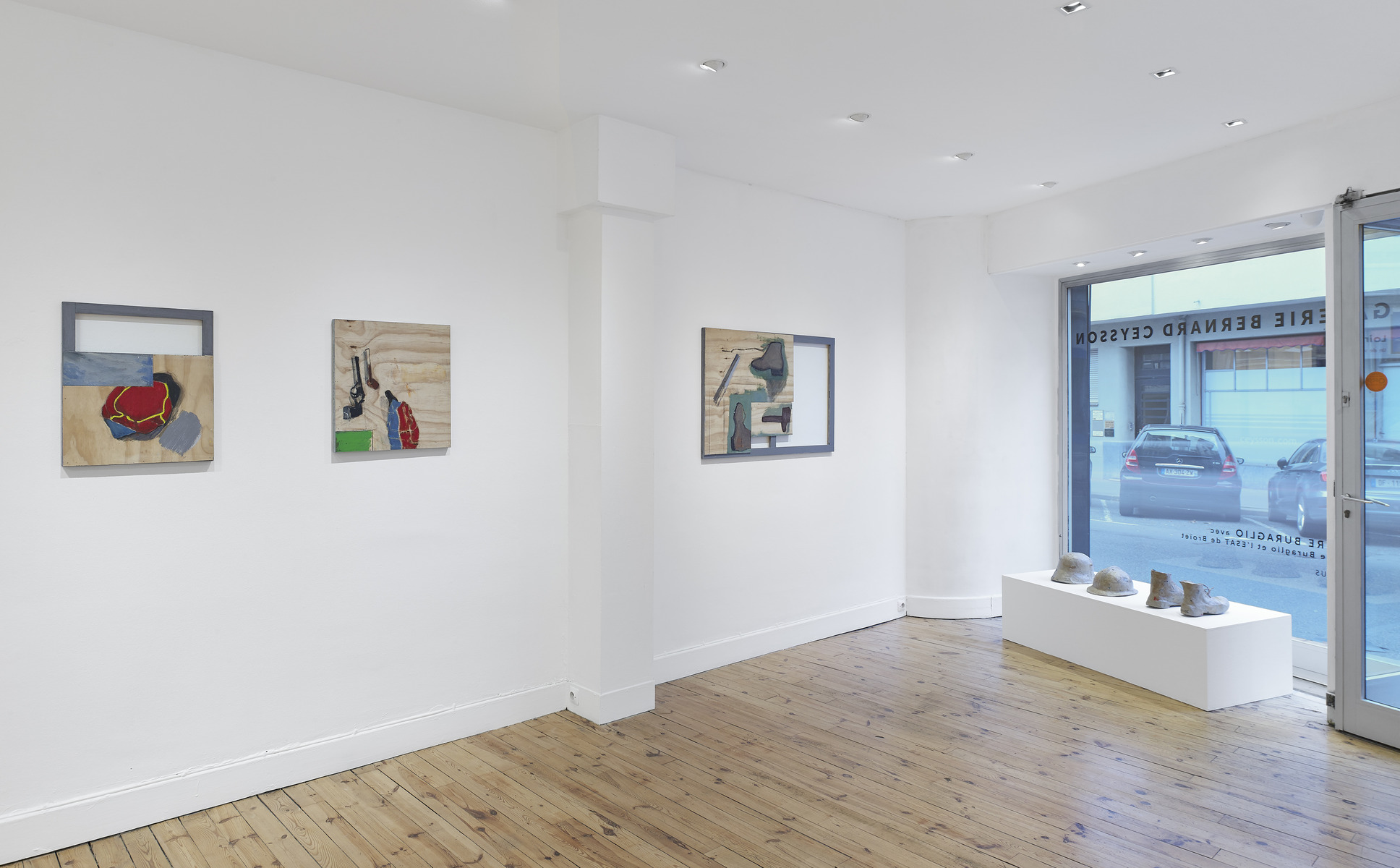 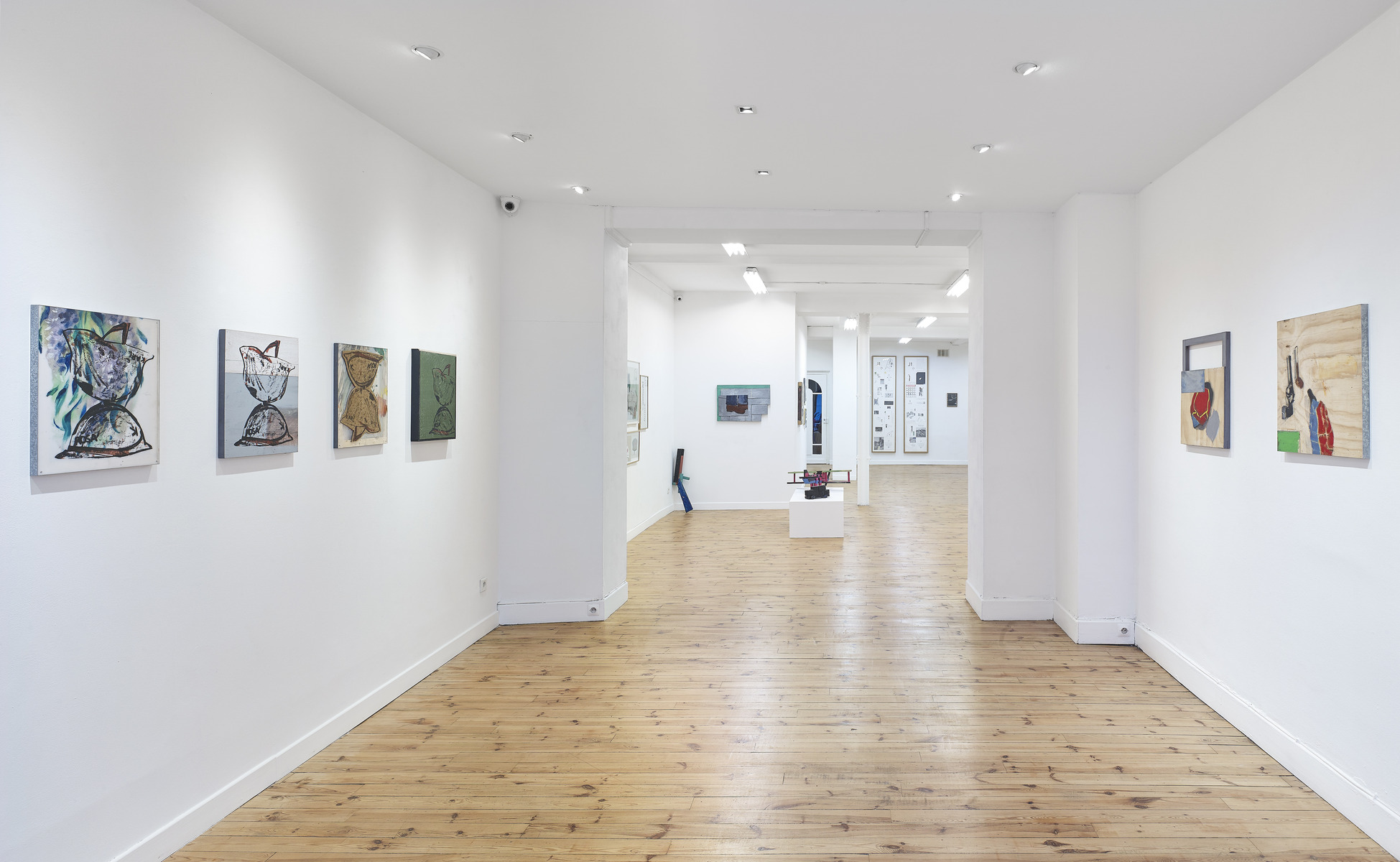 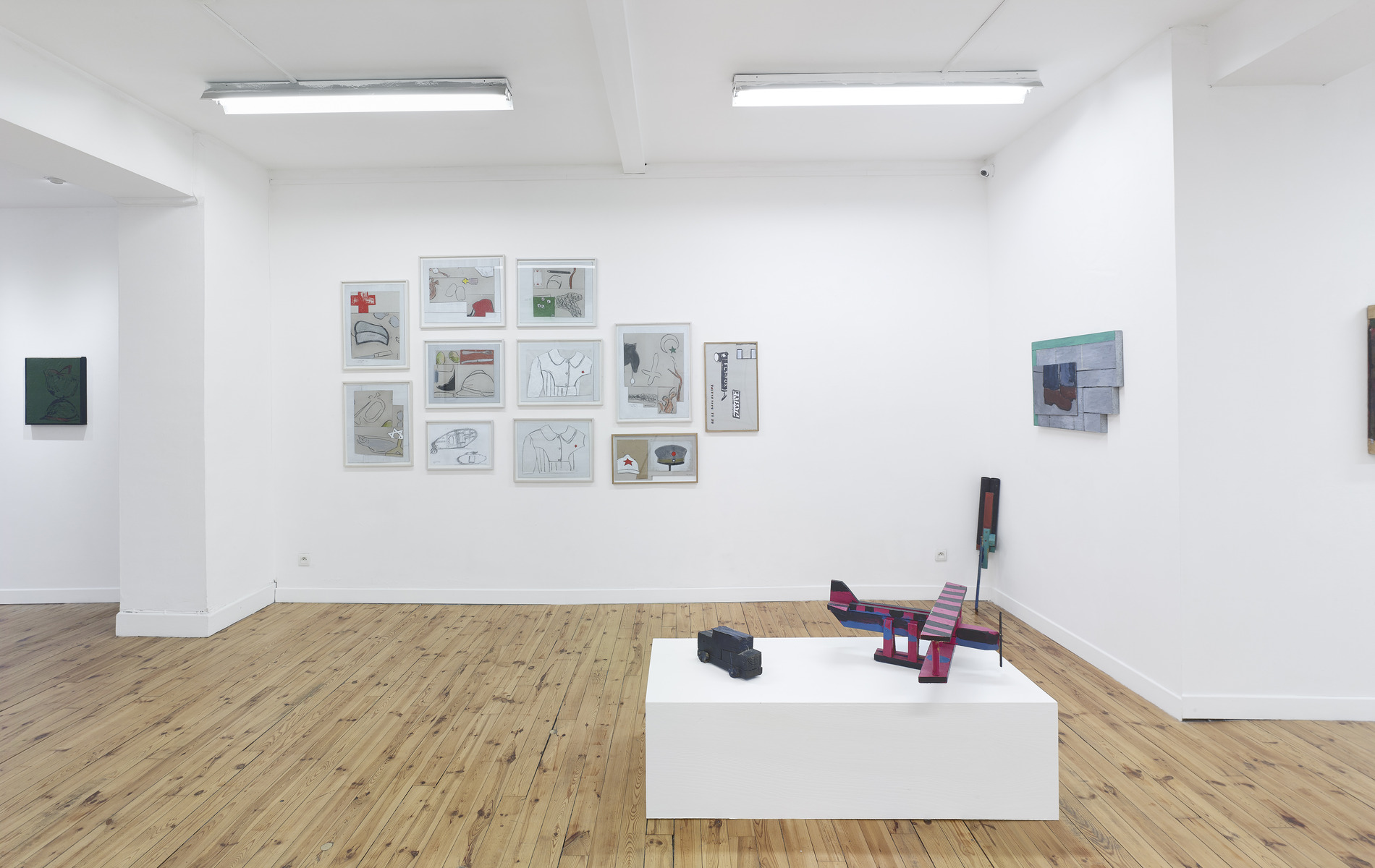 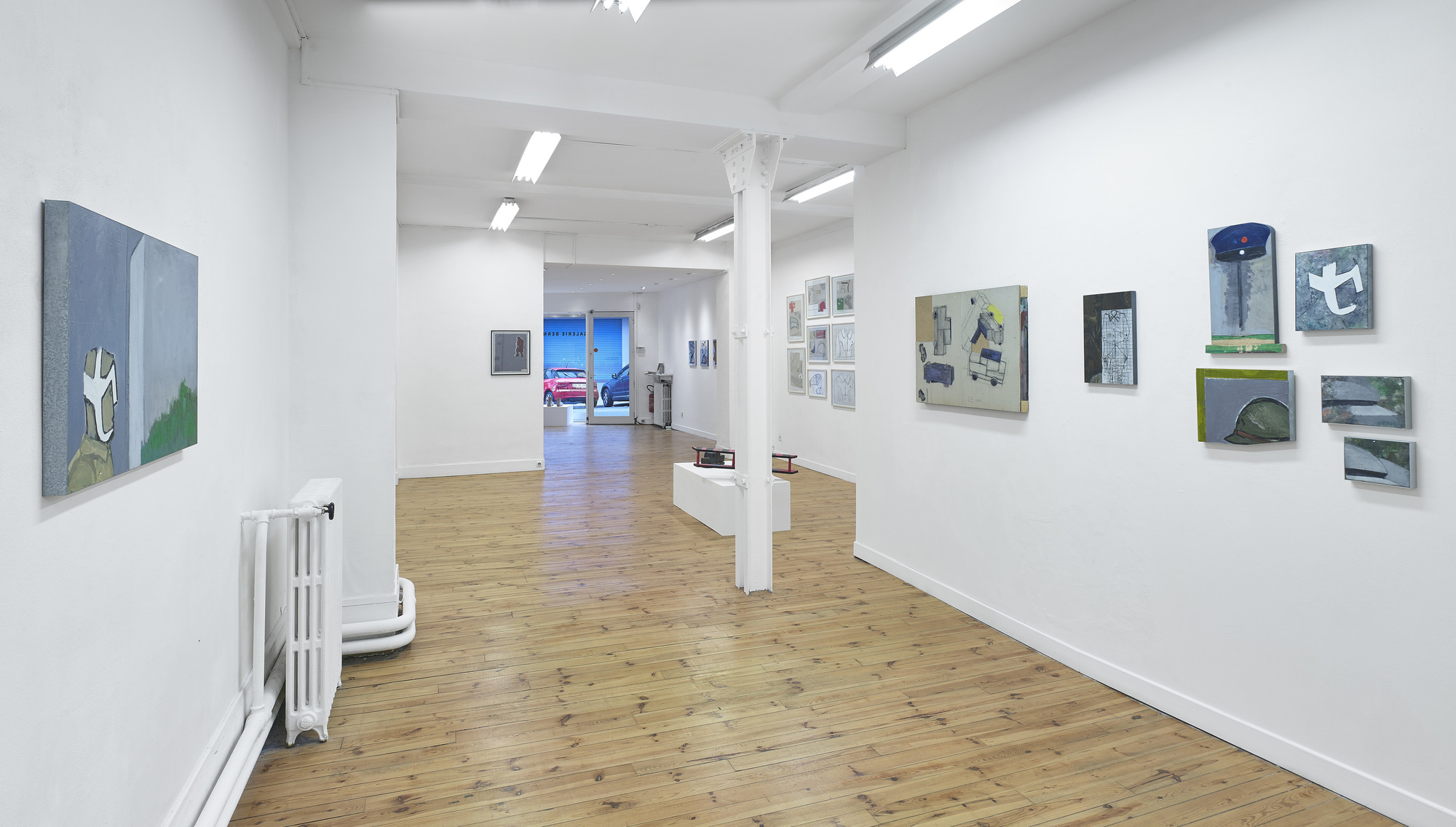 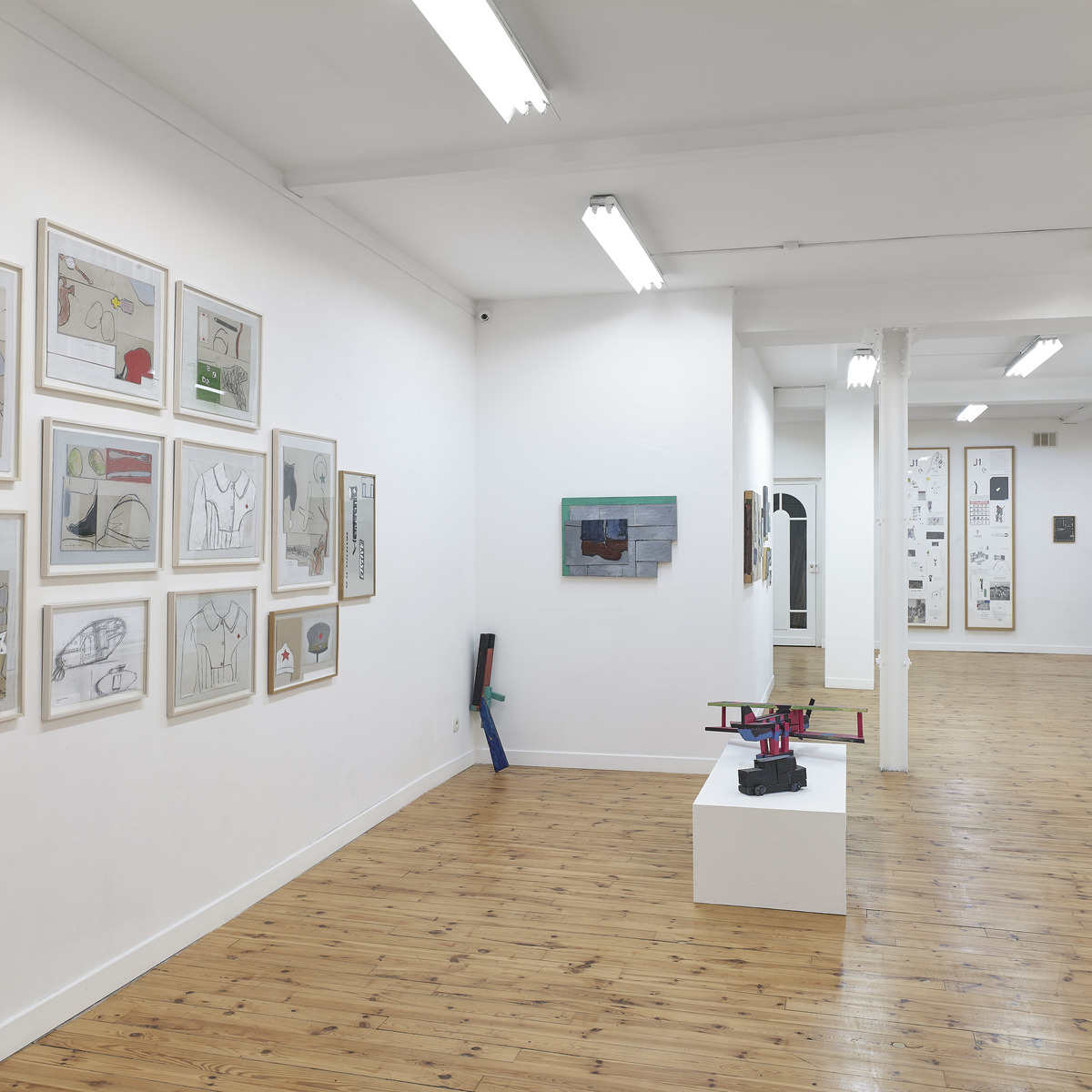 
Pierre Buraglio has chosen to give the name Surplus to his exhibition at the Galerie Bernard Ceysson. It follows in the wake of the shows at the Historial de la Grande Guerre in 2011 and at the musée de Louviers in 2014, in which the artist had dedicated himself to the theme of war. The surplus objects are the vestiges of war, all that is left after the violence is over. They are objects that have literally become useless, or at least whose primary function has gone. They are the traces of war in a present that has freed itself of strife, but which also indicate its persistence. They have lost none of their aura of menace: the surplus items wait from one war to the next.

For Pierre Buraglio, it is not a matter of depicting war but of coming to terms with its material memory. Helmets, boots, uniforms, water bottles and peaked caps are all motifs of this surplus as are, in their own way, the series of “Blokoss” or pillboxes, with their odd architecture, that have become strange and absurd masses dotted around the countryside. The artist plays the archaeologist: he exhumes, collects, puts together various traces. He makes them rise to the surface of the paper, card or wood so that the silent forms of these objects may bear witness to the people who handled them, to their everyday lives and desires, as indicated by the title of the series: Rêve de soldat (‘A soldier’s dream’).

Pierre Buraglio is seized by the drawing of these silent traces just as one bangs into the persistent reality of his objects and the charge of memory they bear. A Guerre intime (‘Intimate war’) as the title of the exhibition at the Historial put it, a process of memory linking the various parts of memory in a personal manner. Pierre Buraglio was born in 1939; his father was taken prisoner and, following his return, he took his son to Normandy where he was in charge of reconstruction.

It was there that he saw the Blockhausen, or pillboxes. The journal he produced on those years of war, called J1 – from the name of the ration cards for children aged three to six – and his notes on this period are exemplary of a biography functioning through reattachments, snippets, associations of images, references, affects, quotations by writers and ready-made formulae the child could understand. These are materials one has to “deal with” and this mechanism of combinations joins that used in other works by the artist, beyond the theme of war. The fragmentation, splitting up of the motifs and supports refers to the movement of memory that refuses to fade. Thus the partially covered frames open out on the wall.

The incompletion is prolonged by the poor nature of the materials – card and wood – and the almost spectral forms drawn in pencil. Memory plays against an immobilised and disembodied History. History is no less present but is seized at the level of individual life or by the telescoping of a motif and the inscription of a name: two helmets with the first names of Karl (Libknecht) and of Rosa (Luxemburg), which is also that of his paternal grandmother. These are figures of resistance against war too, and in the final analysis, this is what Pierre Buraglio’s works are all about. In the series of the Apollinaires and then of the 1917 mutinies, the face is hidden under bandages like crosses eating the face: drawn from the machine of war, the persistence of life whose traces are picked out by the artist.