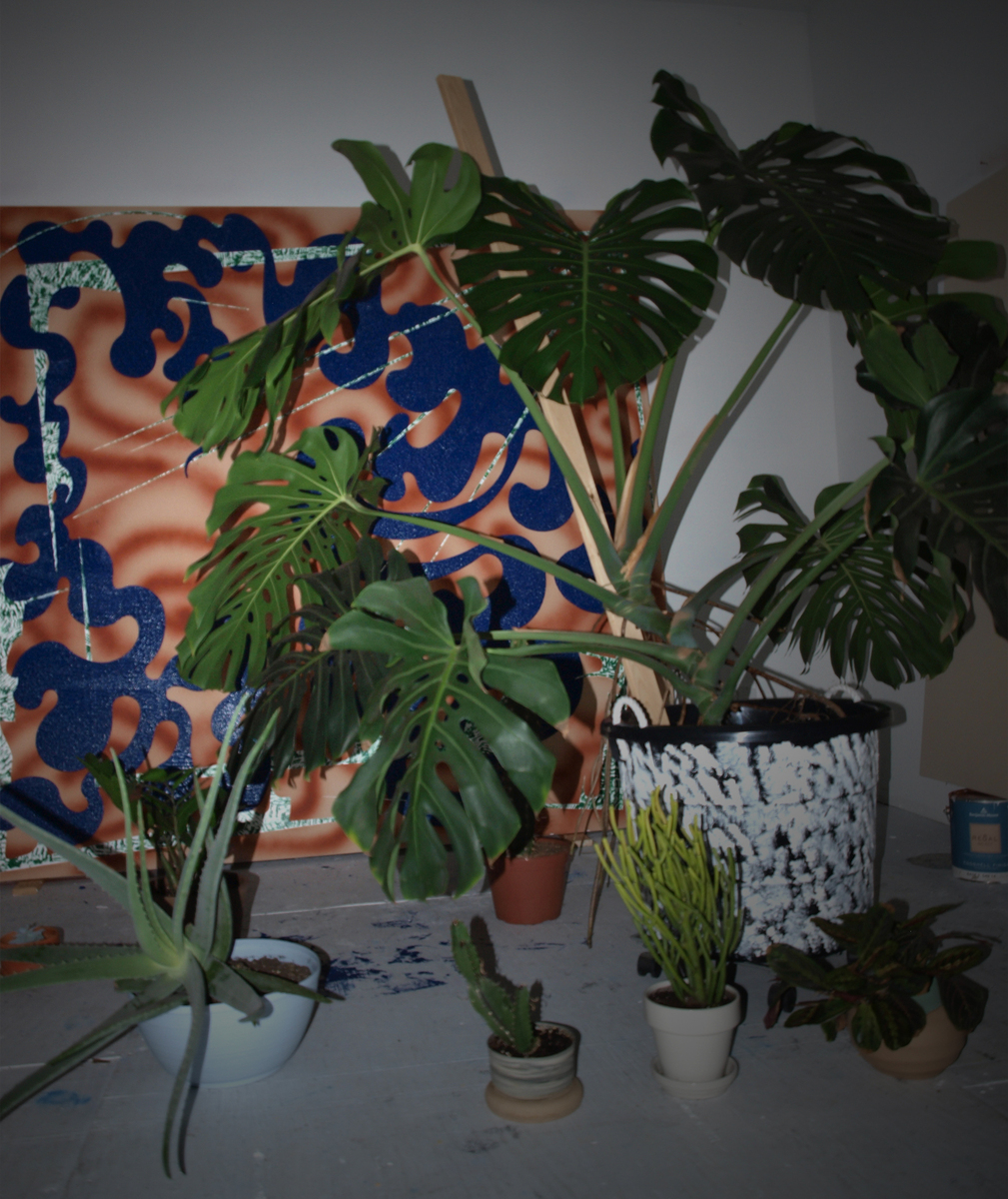 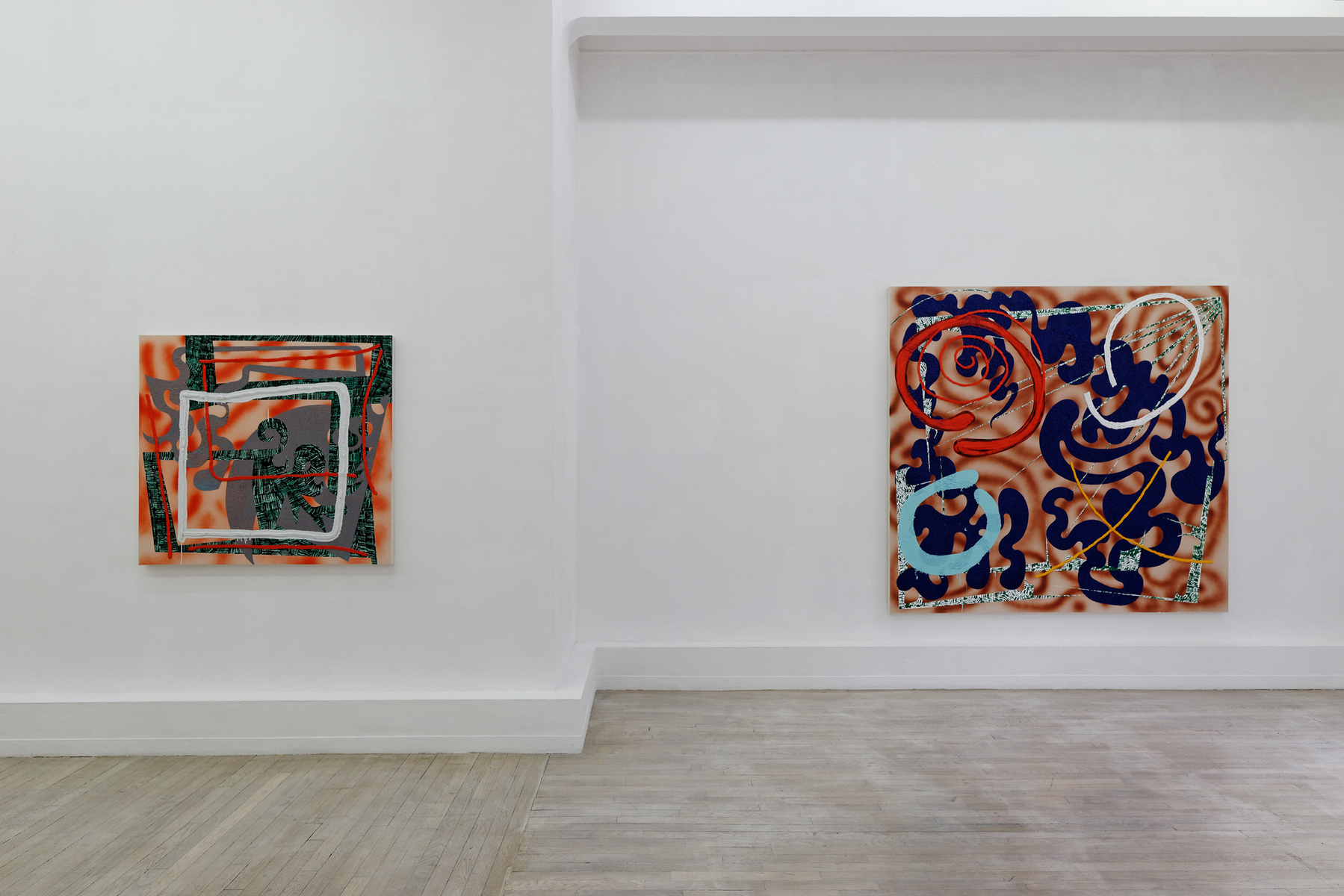 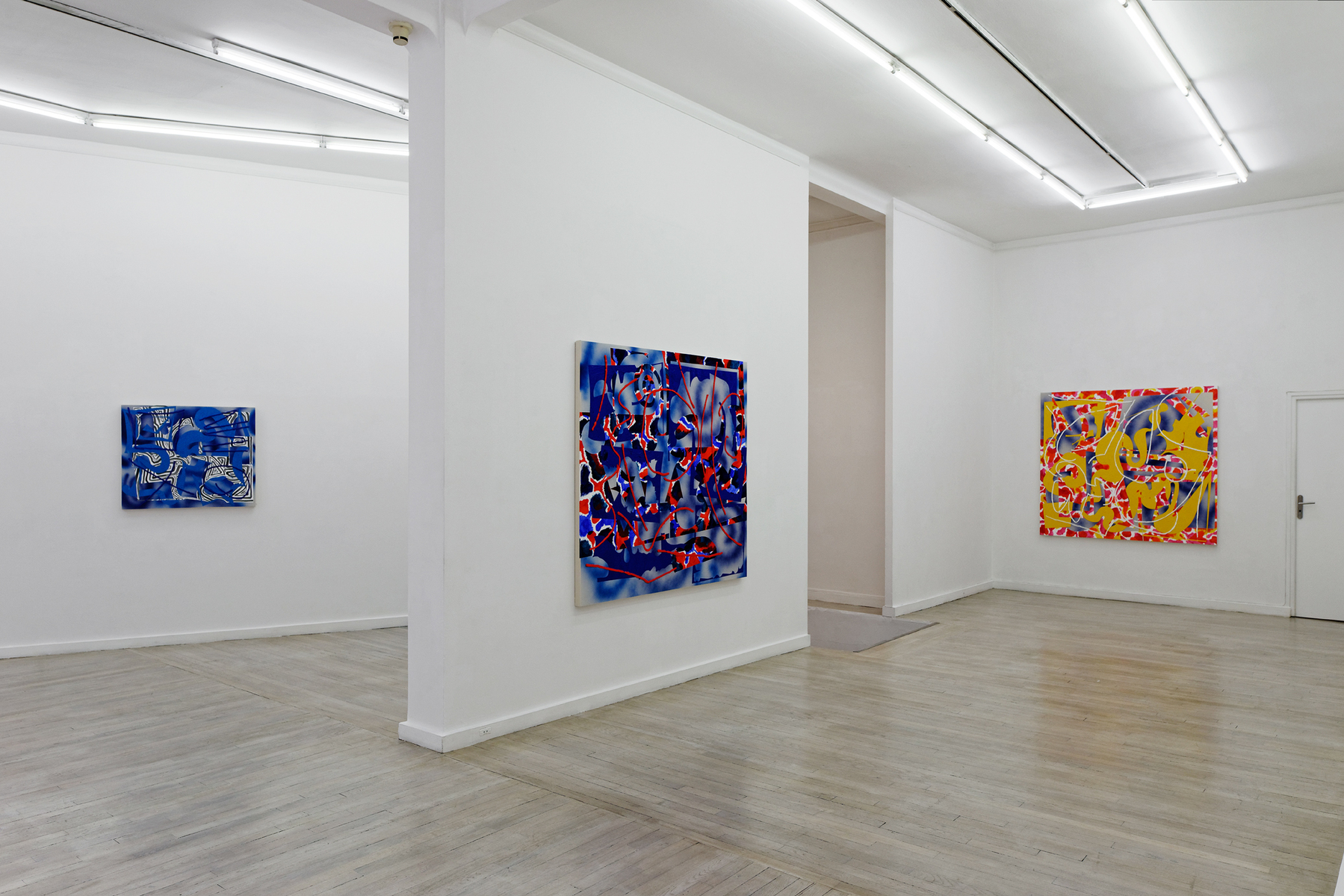 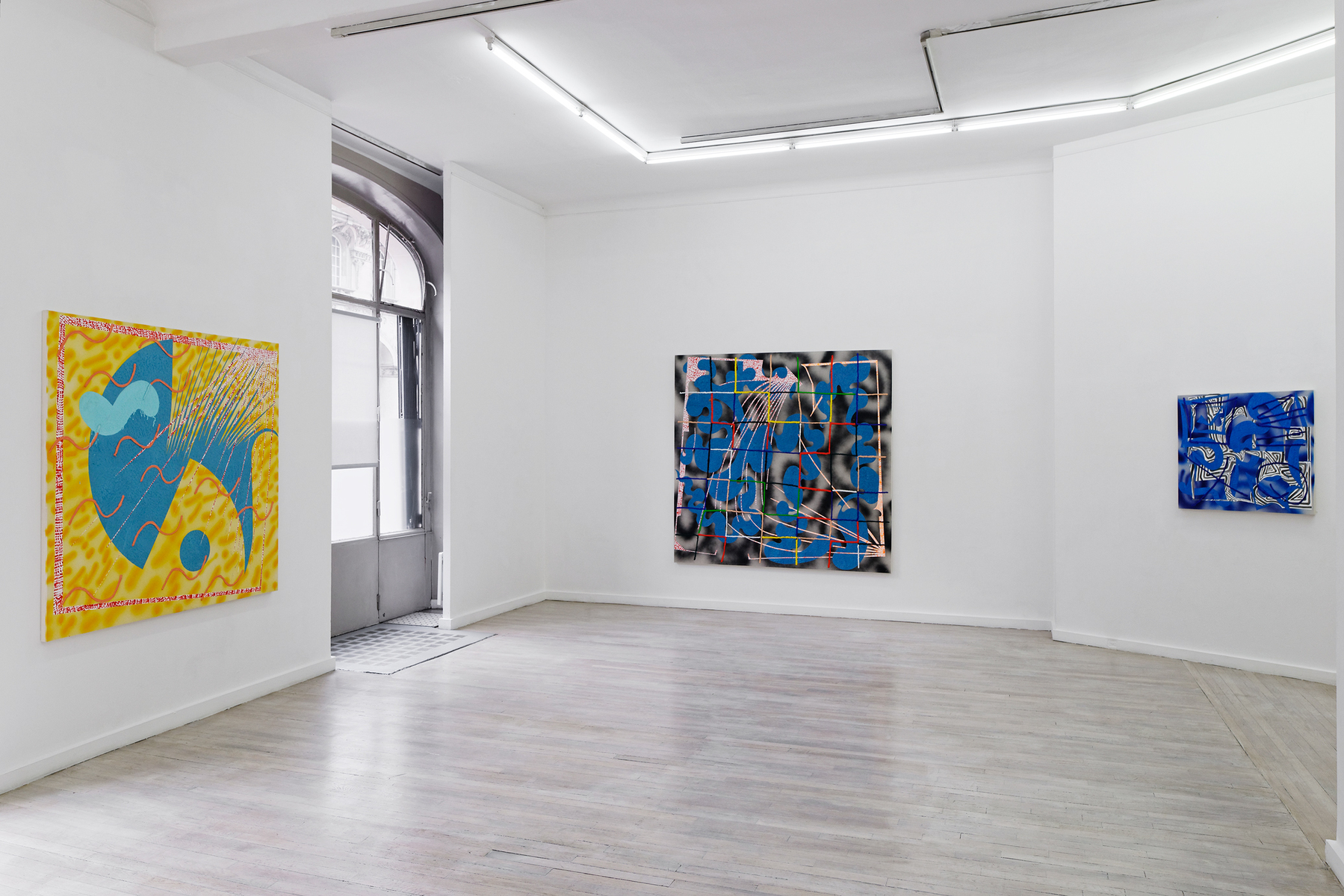 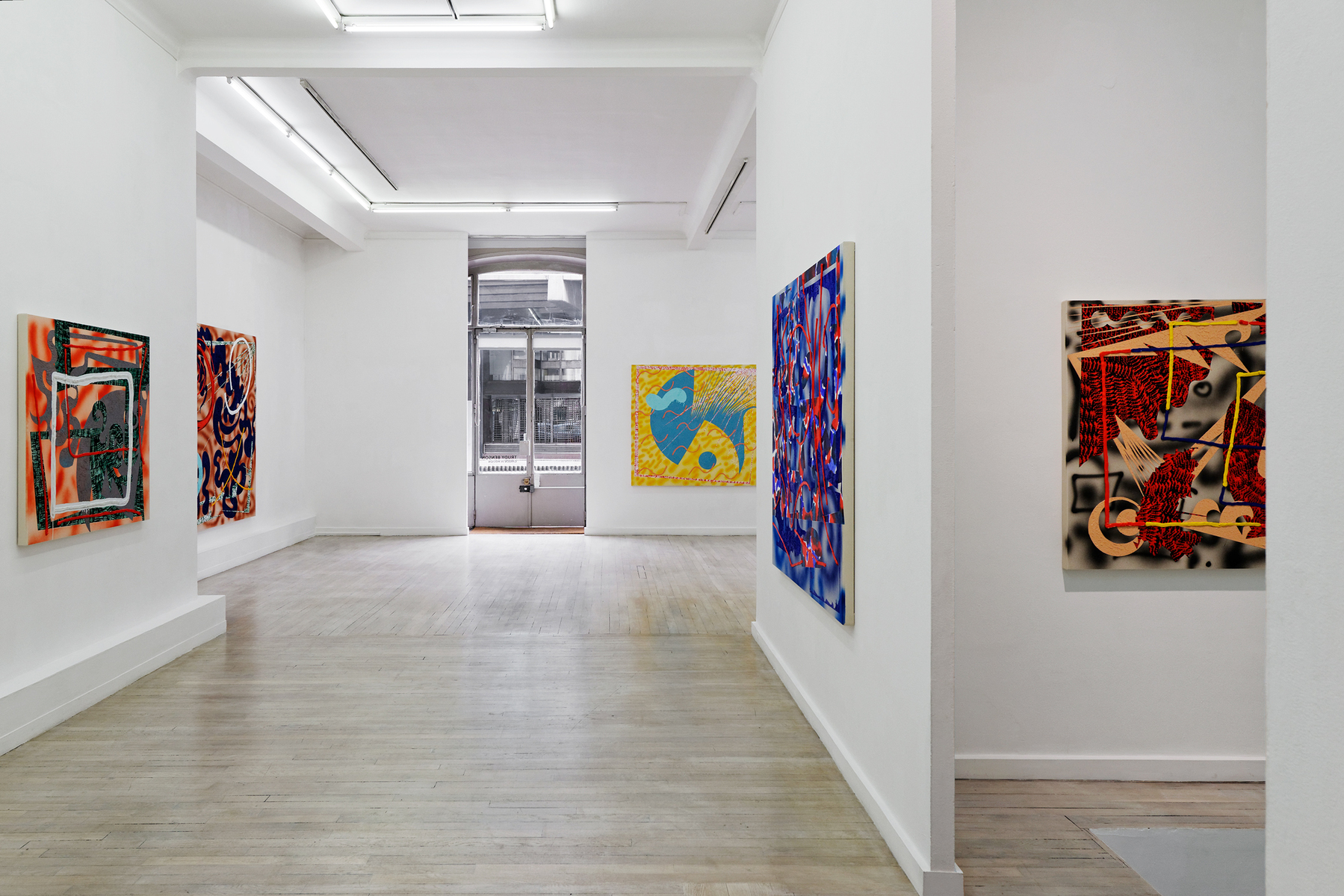 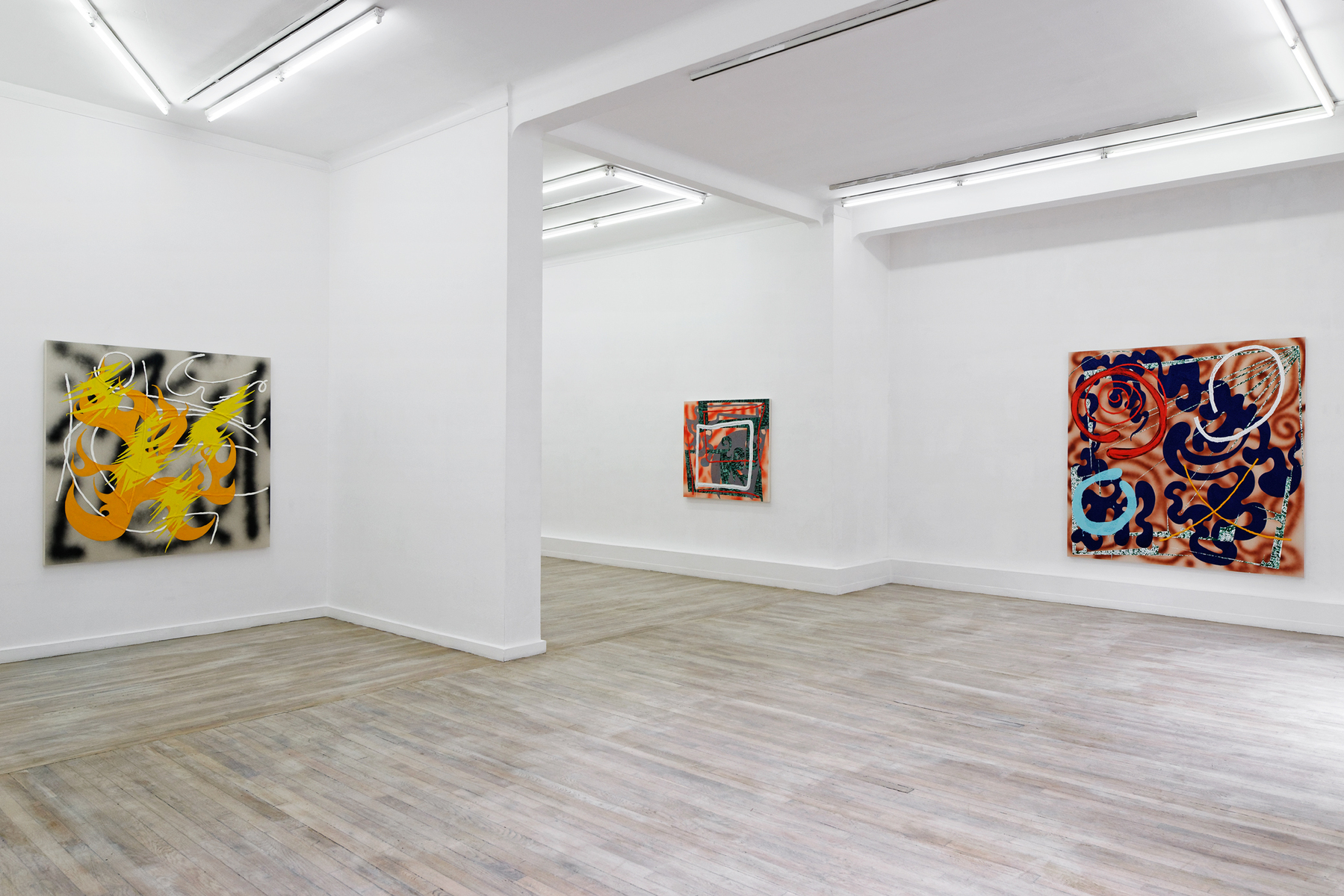 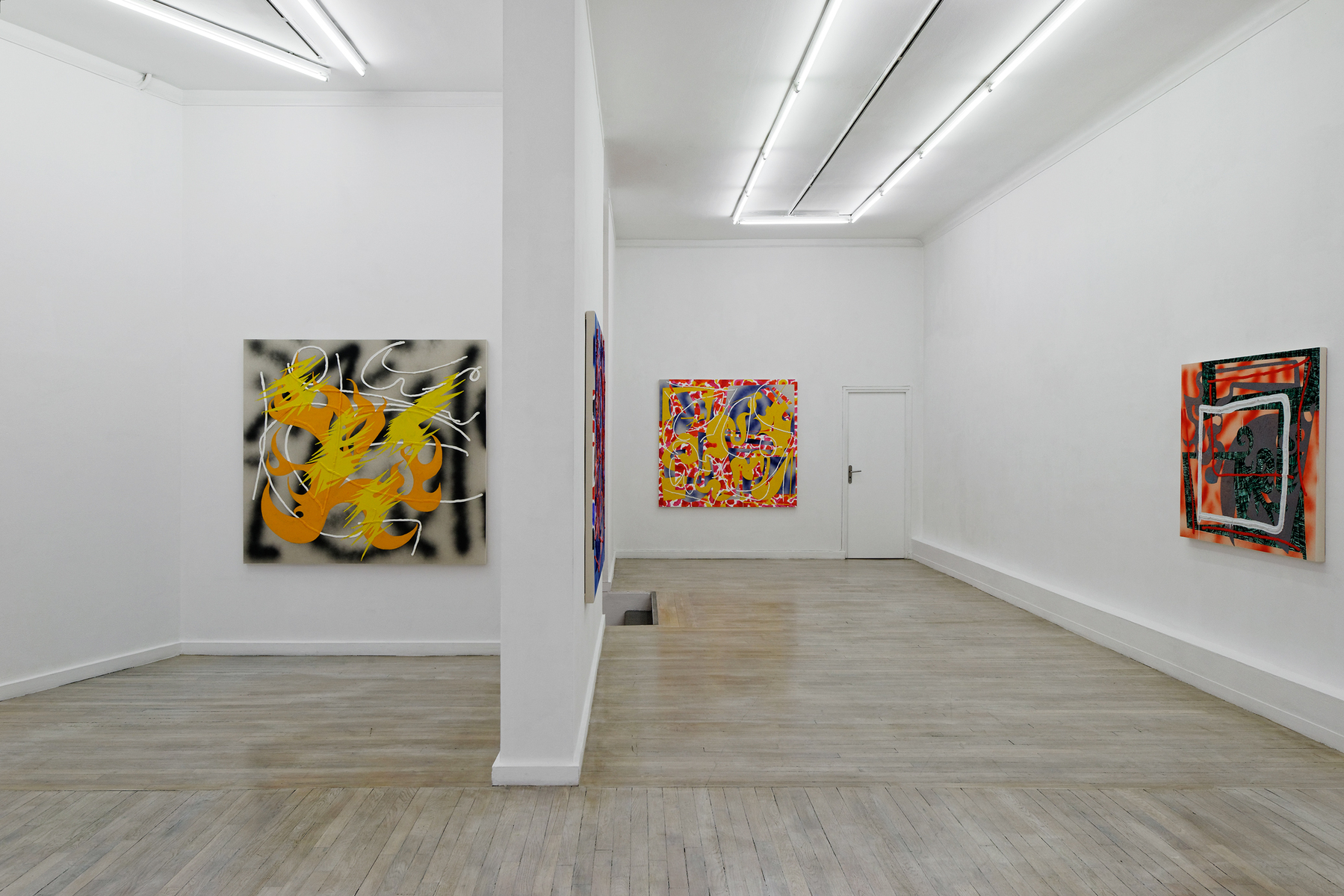 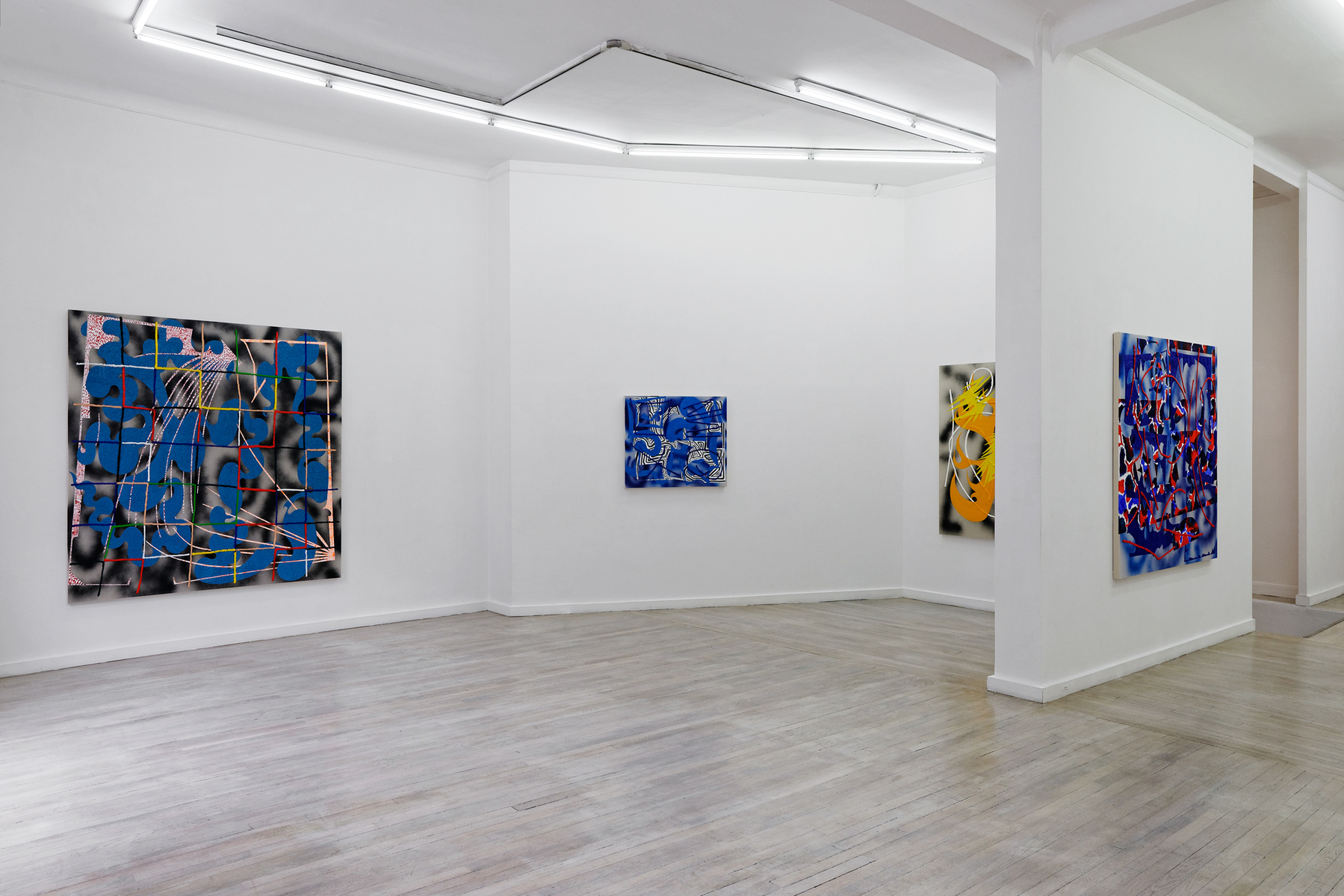 
Trudy Benson’s reflections on her own pictorial construction are similar but keyed in a different direction from Jonathan Lasker’s. As she put it, “The raw canvas gives the painting a floating feeling [and the] airbrush makes a Frankenthaler-like stain that pushes [the space] back. Then crisp acrylic shapes create a shallow depth. There is a feeling of being able to move pieces around.” She is also imaginatively sensitive to a picture’s mutability, but she has built a much more vivid and encompassing world. She does not paint as if the 1980s never happened; contingency pervades her work, but she does not accede to it wholly, stipulating that she wants the pieces to be “Not too close, but not too far.” Given the many ways artists have devised of becoming bystanders in their processes, Benson’s exercise of pictorial intelligence as she takes up responsibility for and agency within the picture is almost political in its urgency. […]
Such agency is part of Benson’s modification of Lasker’s strategy. In recounting the beginnings of the project that sustains him, Lasker has described using a minimalist-inflected empiricism to critique not only the formal sterility of Minimalism, but also its airtight logic. In other words, if one acknowledges material conditions, one must also acknowledge, according to Lasker, that “the human imagination will always engage anything that it’s looking at imaginatively.” […]

Benson positions herself at this nexus of literal and optical perspectives, as well as of seeing and not-seeing, since in offering apertures to look through, she gives us only partial views which are themselves obscured by overlaid shapes.
Benson shows that it is the nature of painting to foster such connections. This is her modernism: to uncover the essence of painting not as a set of norms or properties, but as a perpetual feeding-back though ongoing relations, the accommodations of numerous cultural references even as painting itself asserts the components—always rising and falling in relative importance—that have become identified with it through the long shadow of the twentieth century. The ever-changing dialectic of surface and depth that occurs within Benson’s paintings allegorizes painting itself, and instantiates a modernism that is not narrow and refined, but expansive and exploratory, allowing painting to reflect upon itself not only as itself, but through the world around it. It need not turn away from itself. Painting, because of its greatest practitioners, Benson among them, can assimilate and withstand anything anyone puts in it.