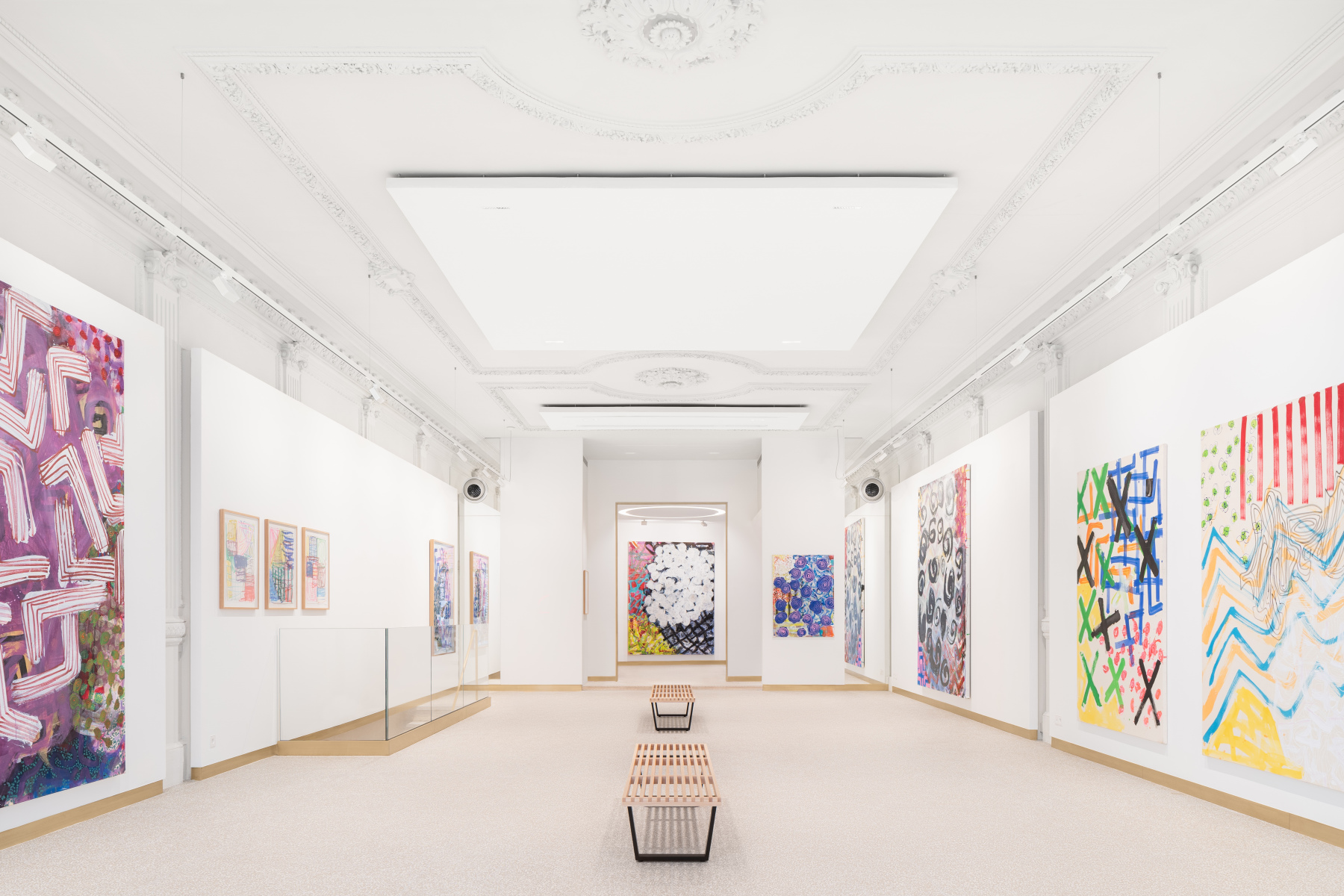 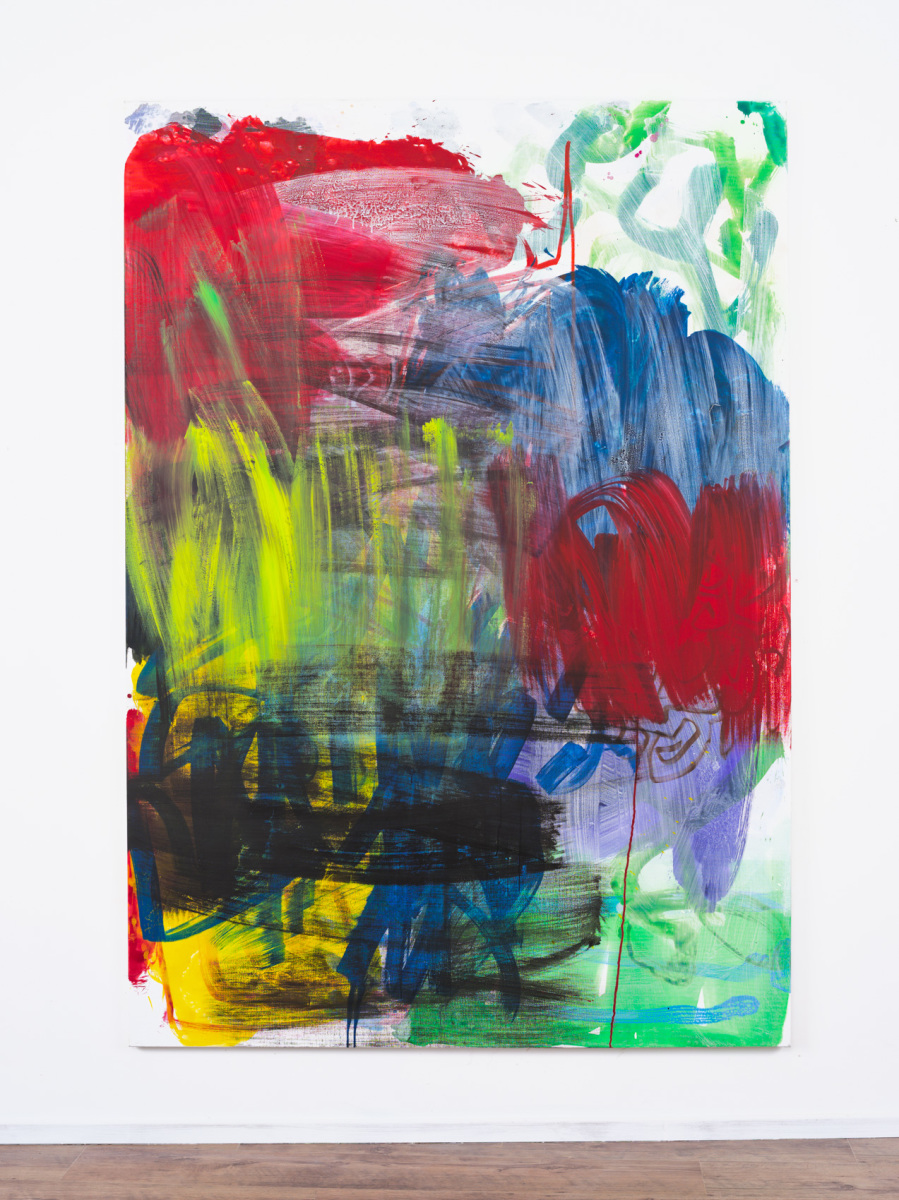 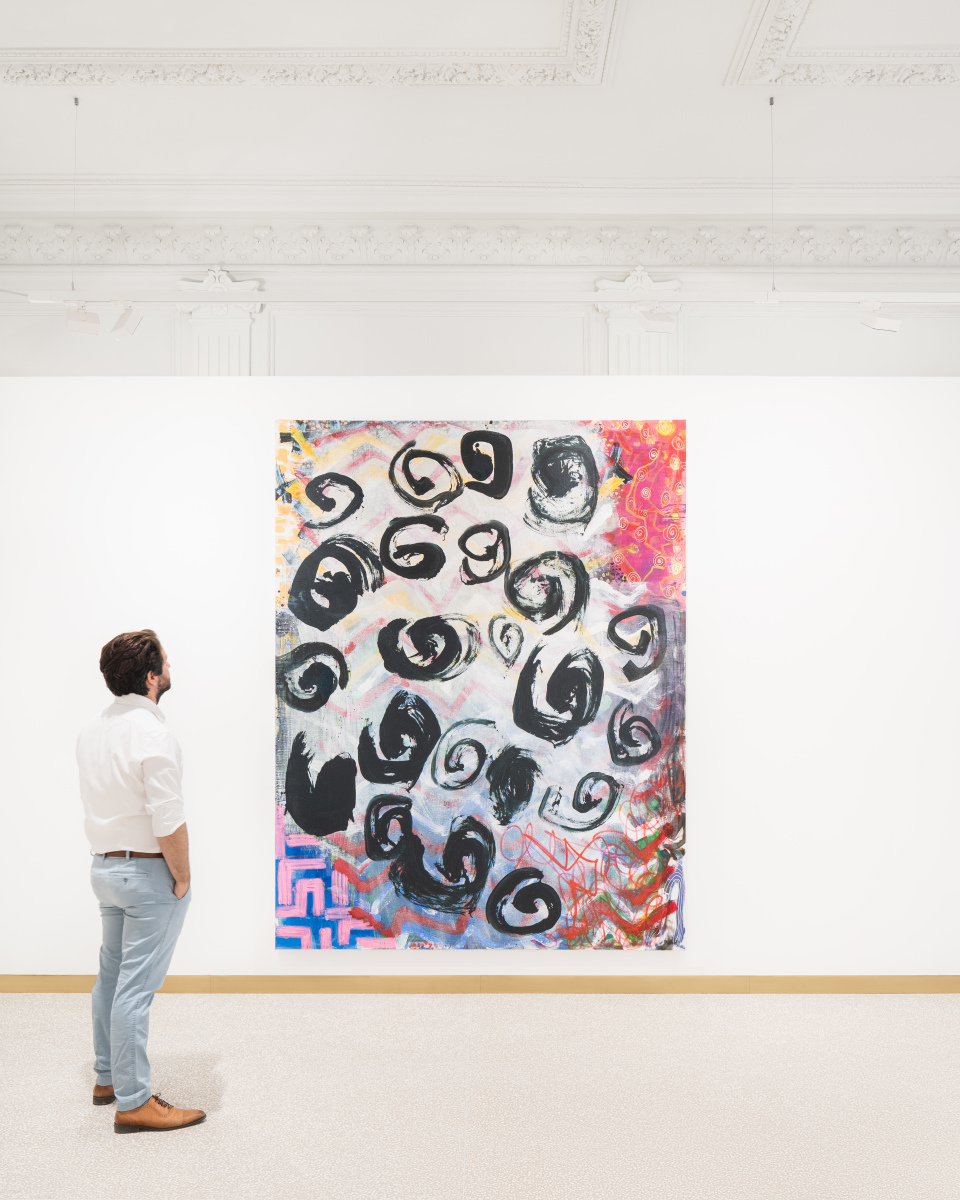 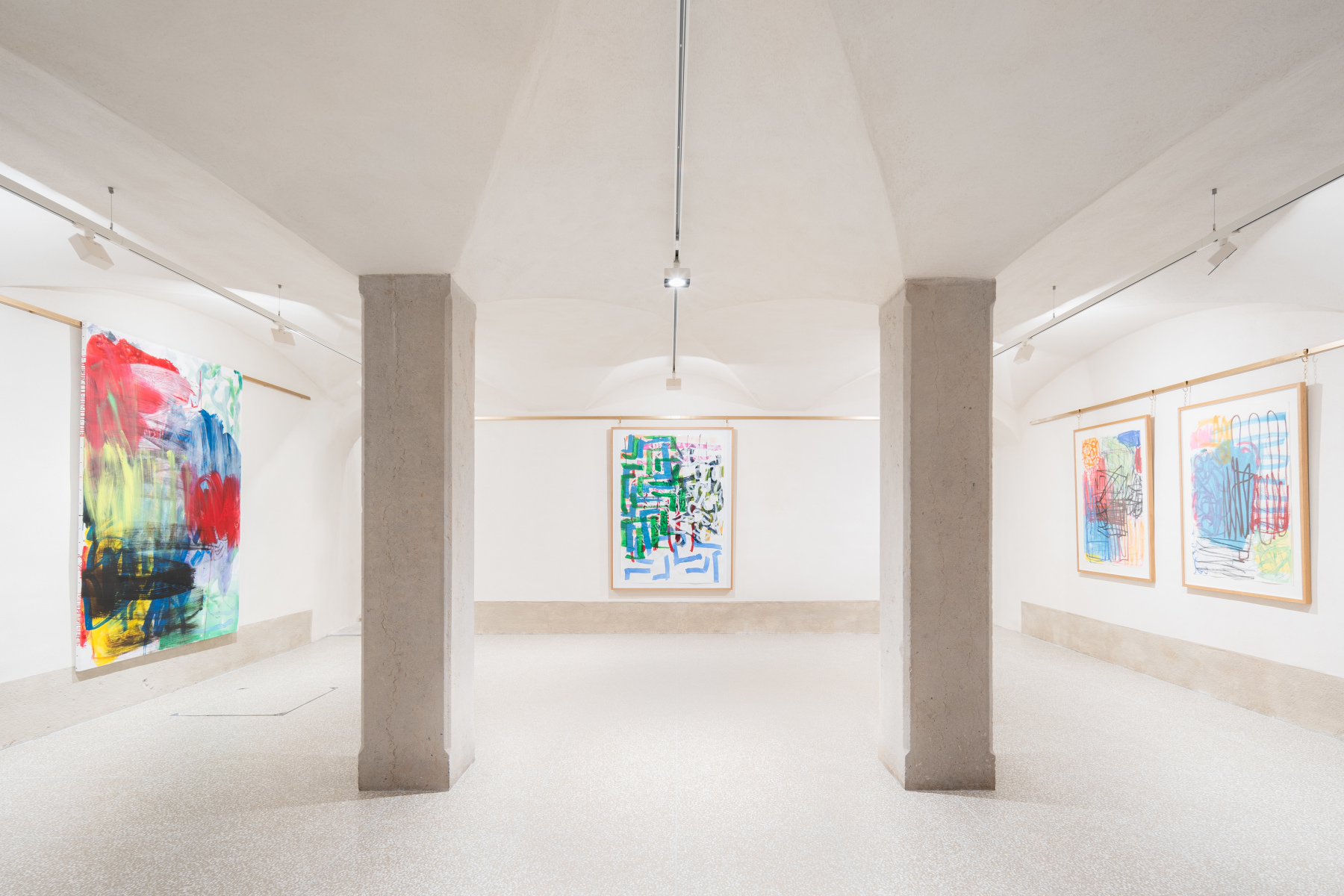 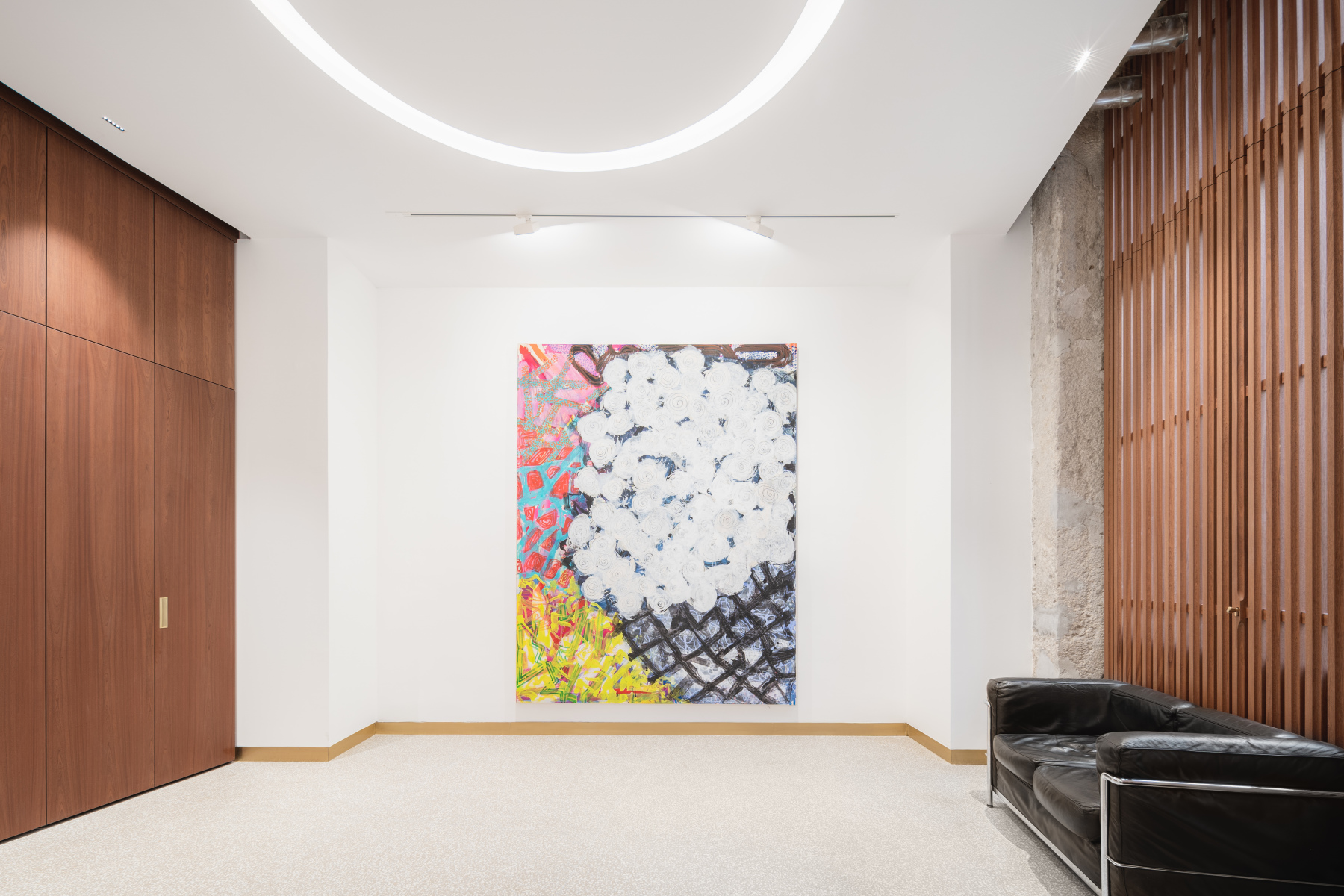 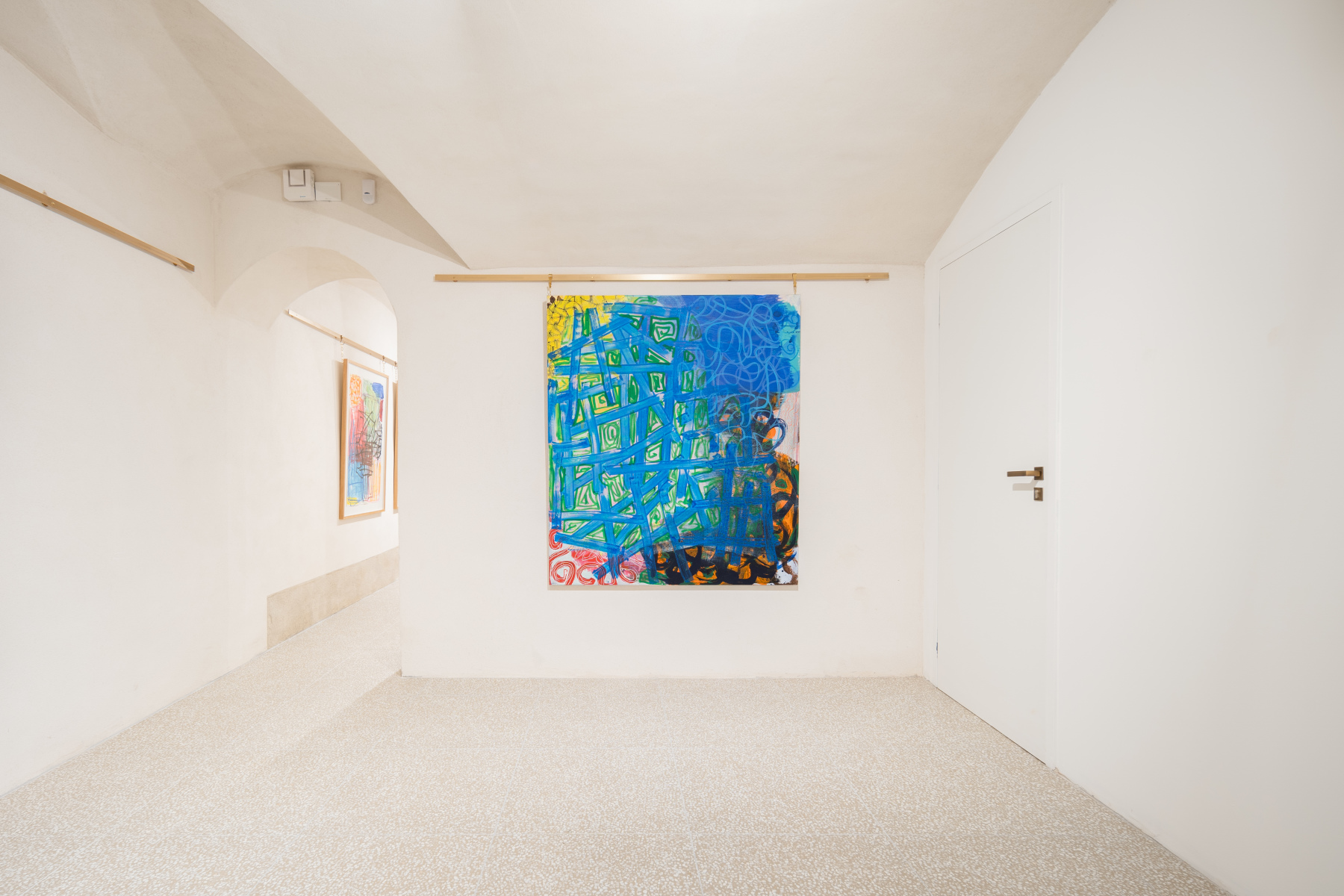 To make painting happen. Something in Franck Chalendard’s art puts us in front of this simple evidence. Yet this evidence doesn’t exactly come naturally. It requires that the artist strips himself off what he learned, off everything that weighs his gestures down with habits and pomposity, to leave fuss and style aside as cheap seductive means, for the unexpected to emerge inside the surface of the painting, where every inch has been violently debated, in a balance between precision and failure. Does anybody have any idea of the energy required to establish such evidence at a time when cynicism seems to prevail?

Over the winter, Franck Chalendard has created a series made of successive covering up and strata perceived as liquid layers, with a few graphic gestures emerging across the canvases. Thus began a new series, with patterns gathering, clashing, and overlapping on a white background: lines, grids, arabesques, and stains turning into flowers. A variety of gestures associated with intense colours. It is from these few elements that the painting is played, improvised, like a melody merely extended, transformed by the variations of notes, suspended in time, unexpected.

In Chalendard’s paintings, the melody corresponds to the repetitive patterns: flirting with decorative art, they borrow the vocabulary of painting in a minor mode, which is also that of major modern artworks from Matisse to Stella. Fabric patterns - stripes, bands, flowers - assemble on the canvas, tapping into the unconscious visual but also tactile and olfactory memory of these sheets and dresses that used to shroud our bodies.

Franck Chalendard works one series after another. Sometimes they are contradictory and give the impression to exhaust the diversity of painting. But this seeming diversity hides an extremely tight work focused on a set of few pictorial gestures - drawing, covering - aiming at enhancing colour over a surface. In the end, this loose improvisation is about making painting happen. And, from these few simple elements the painter is playing with, secret emotions unfold, an awareness of the world, a desire... in short, something that keeps us alive.”