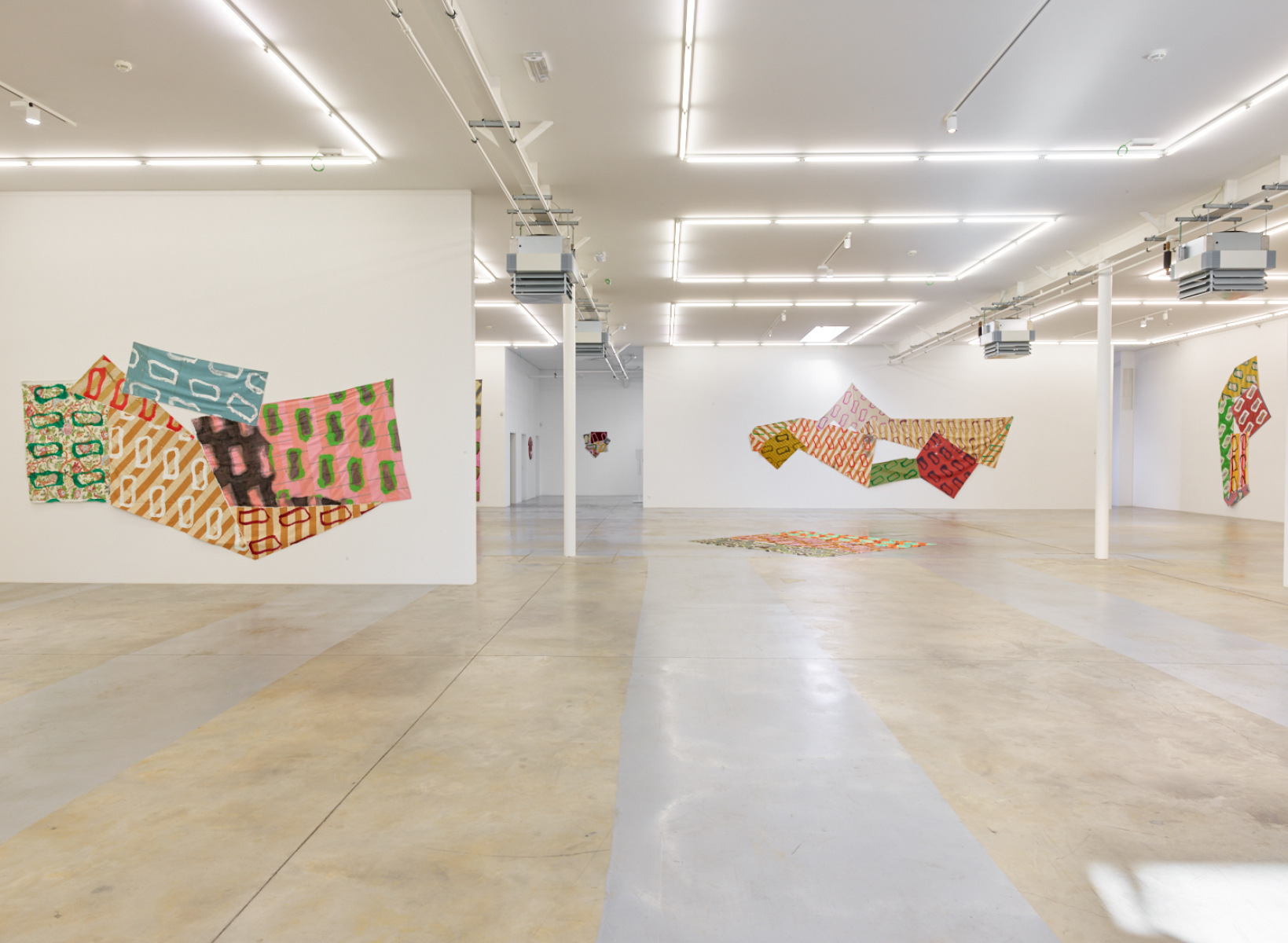 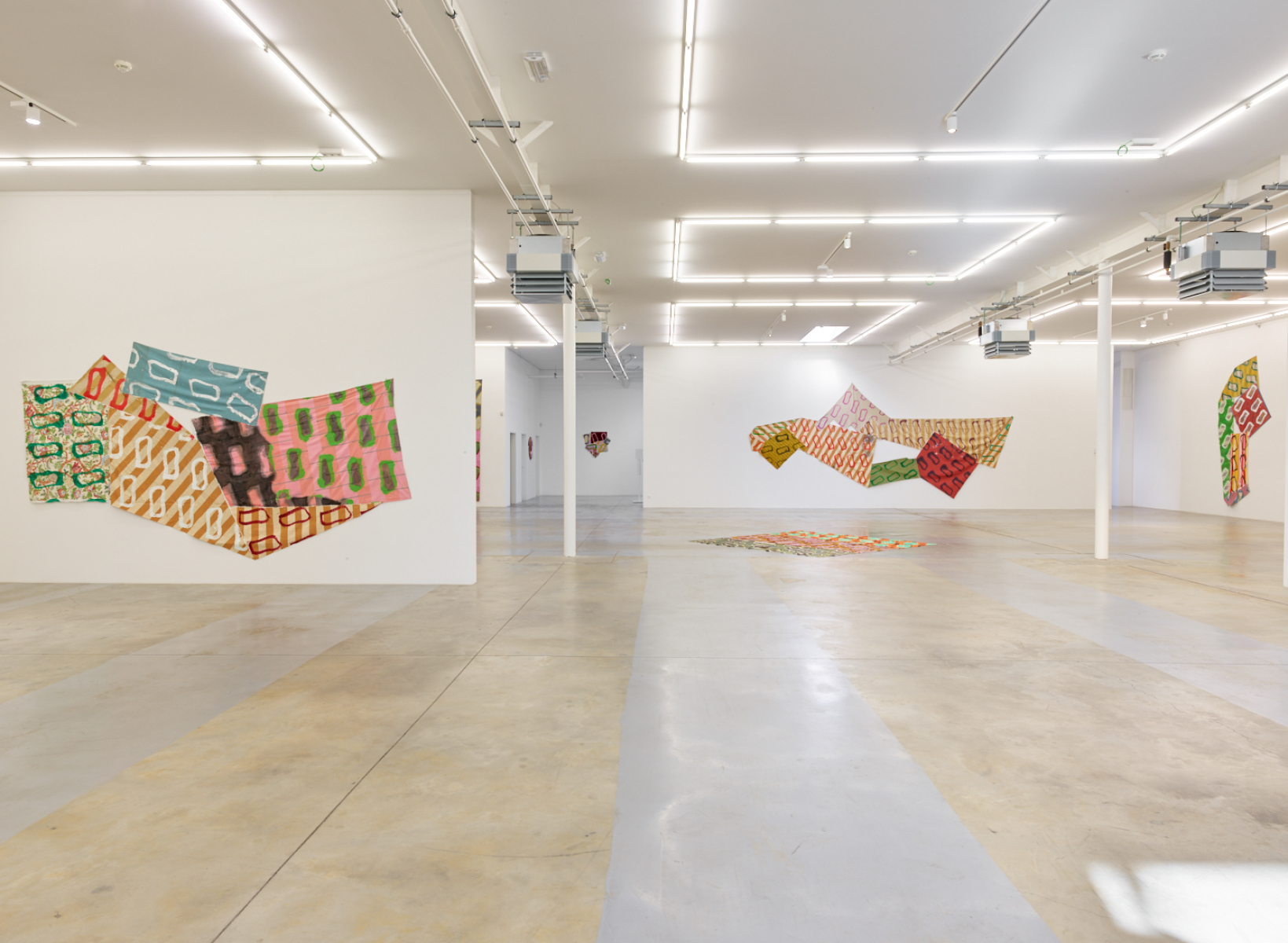 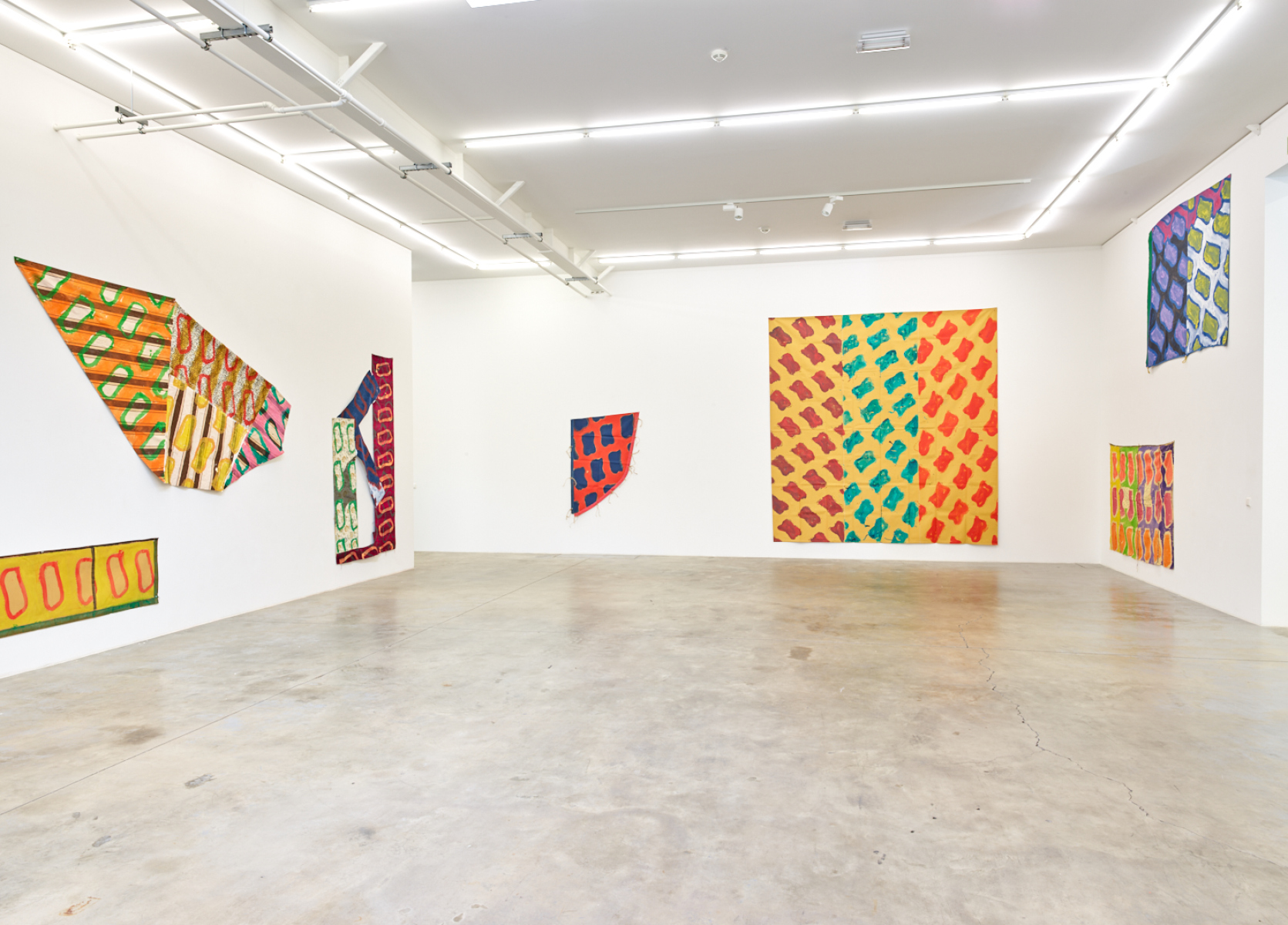 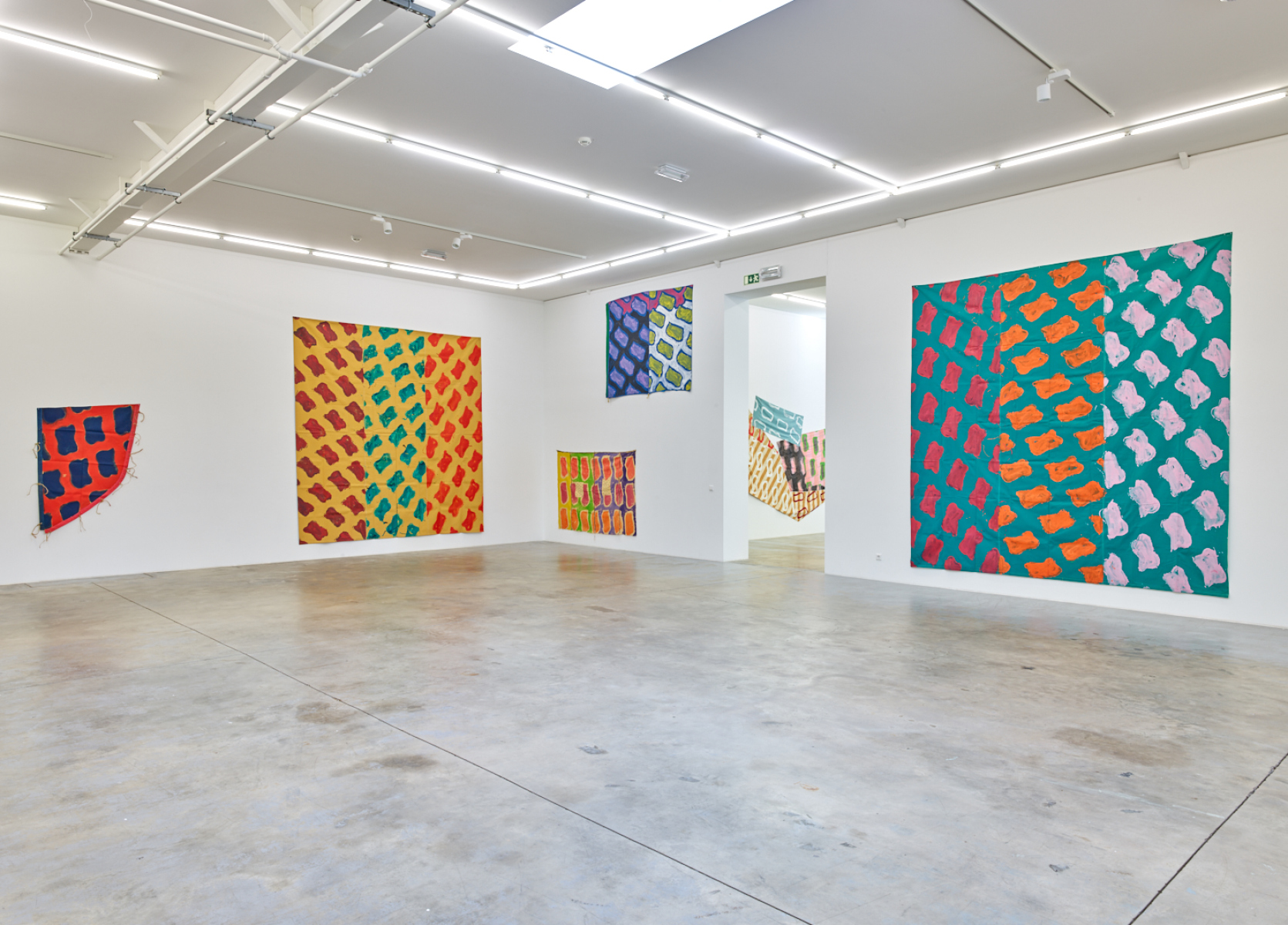 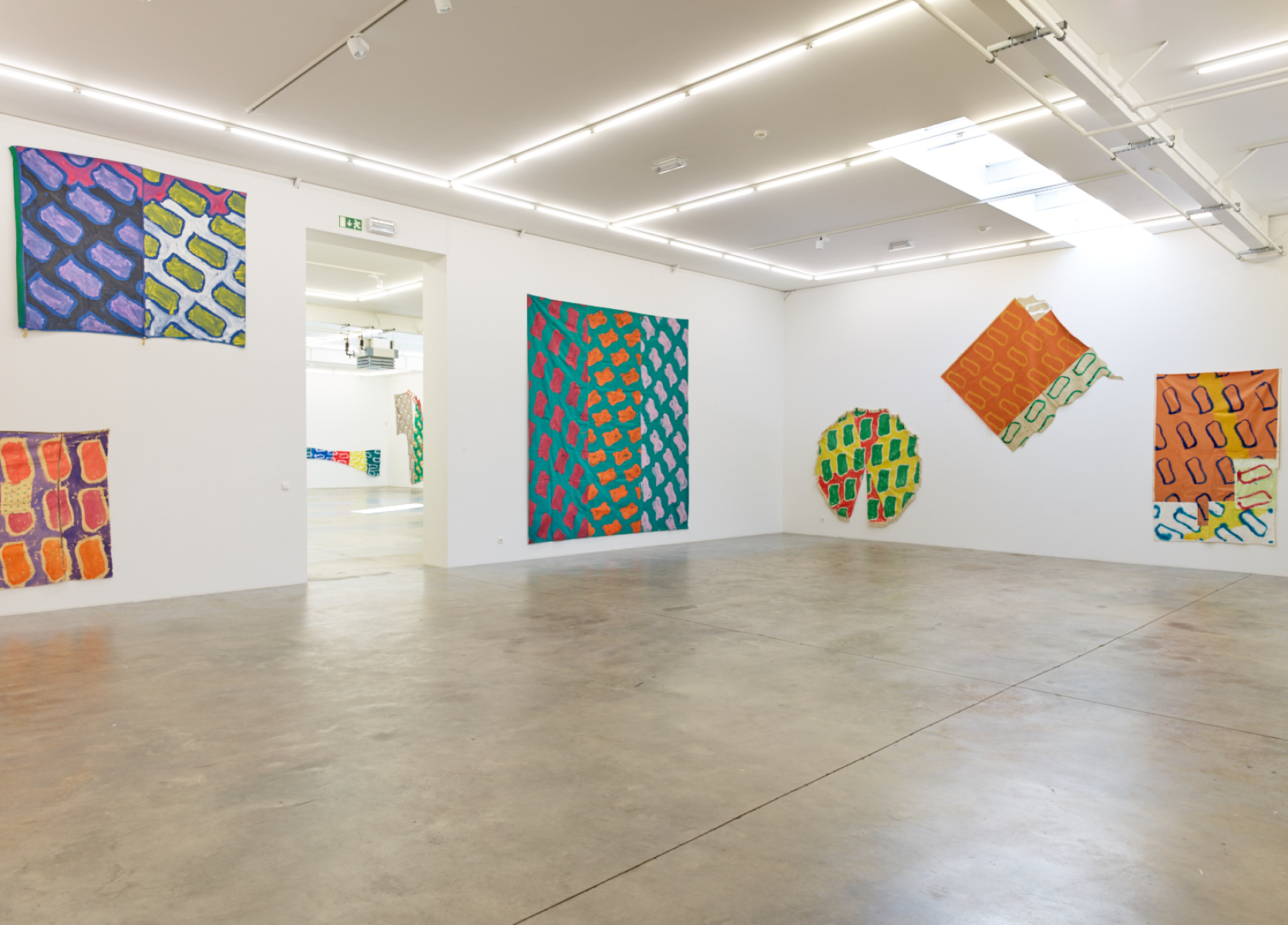 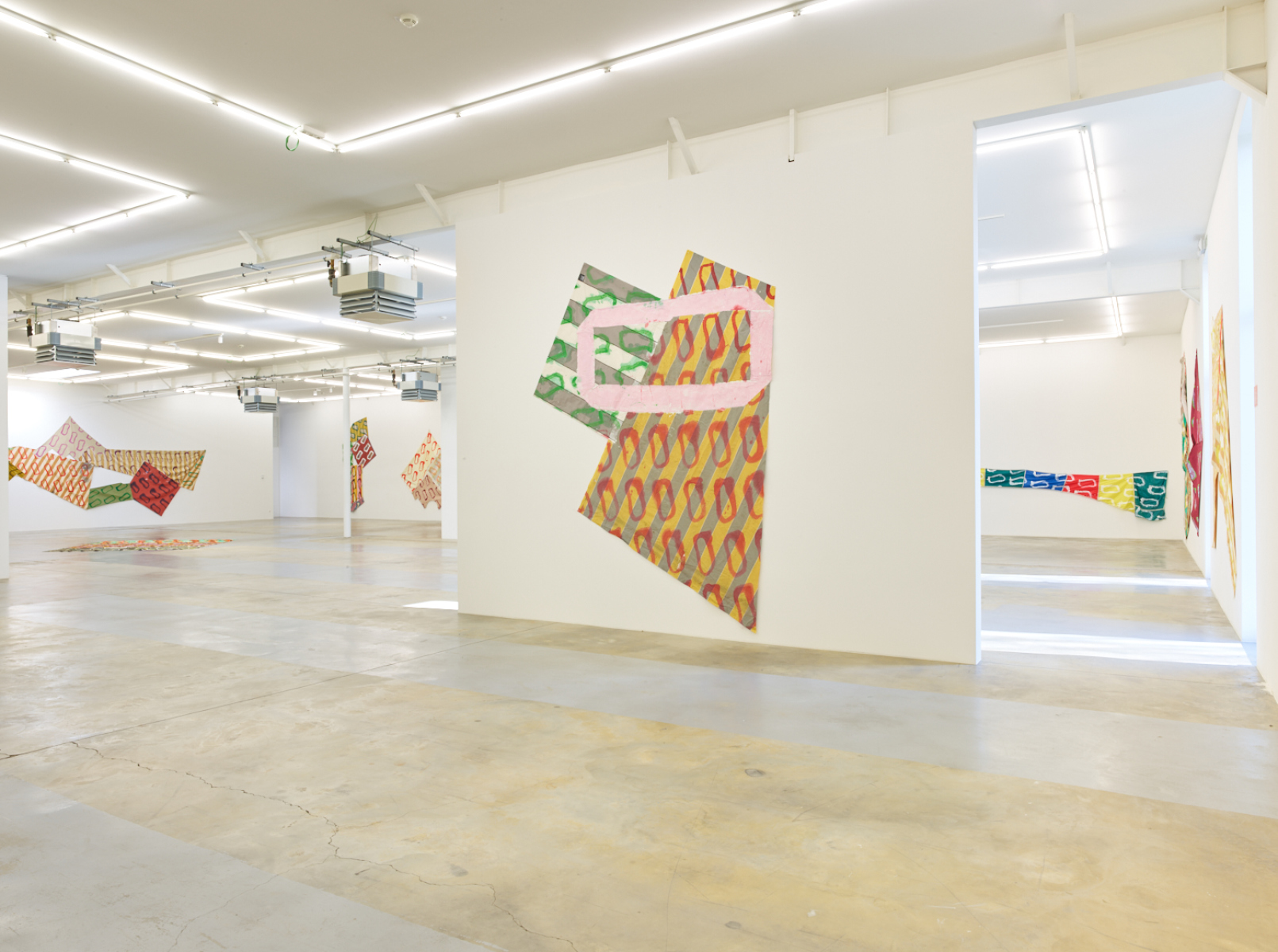 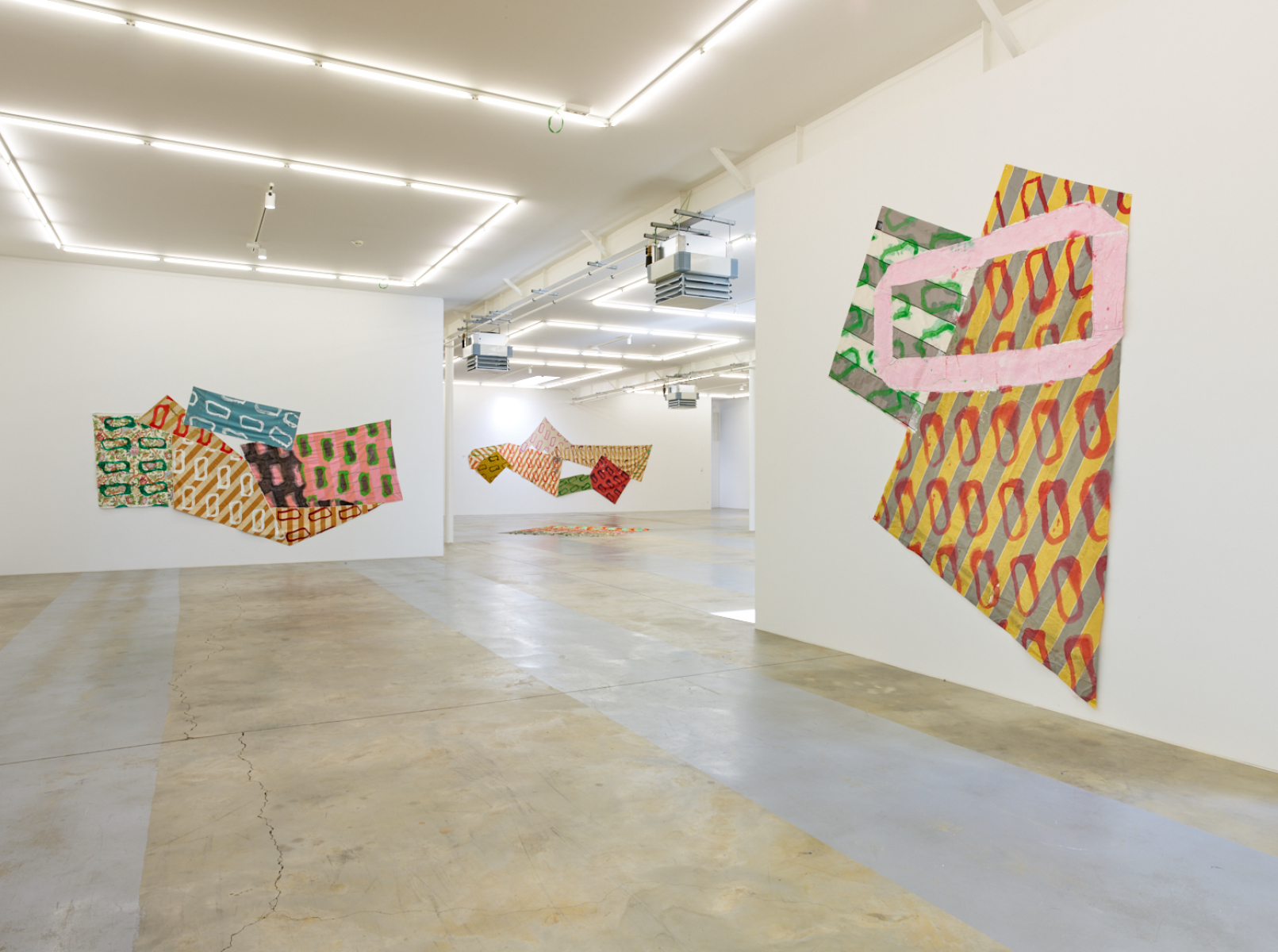 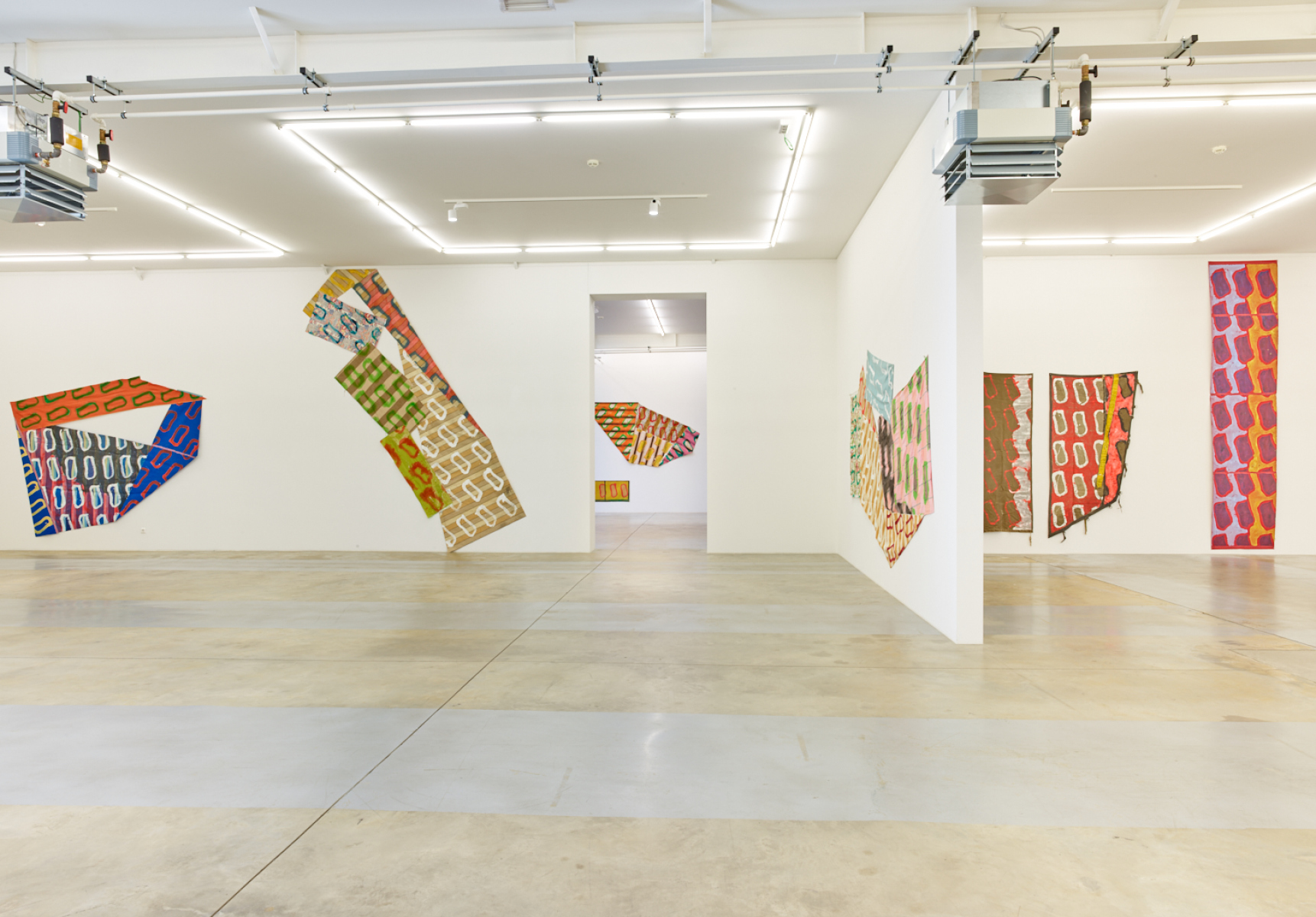 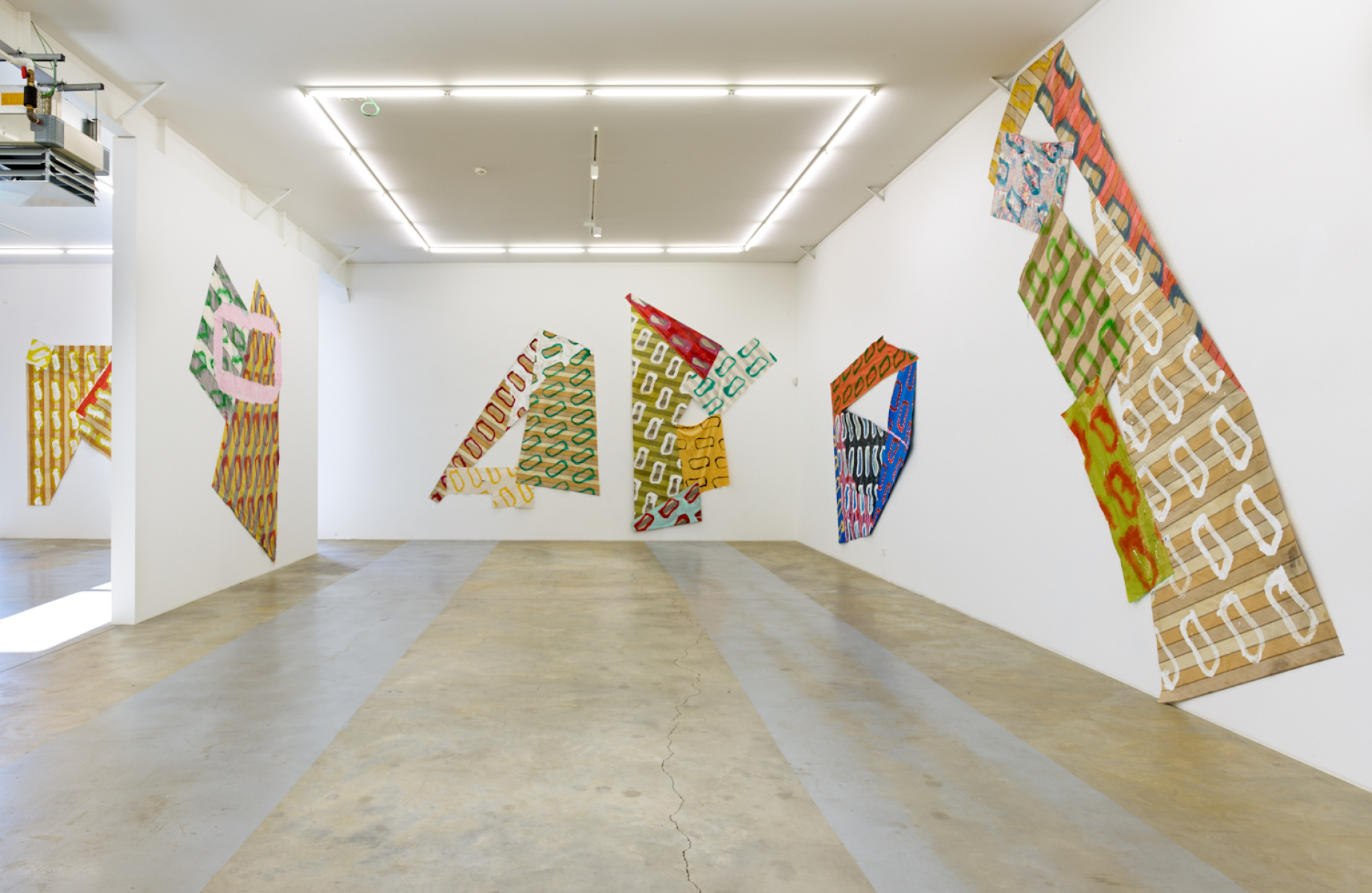 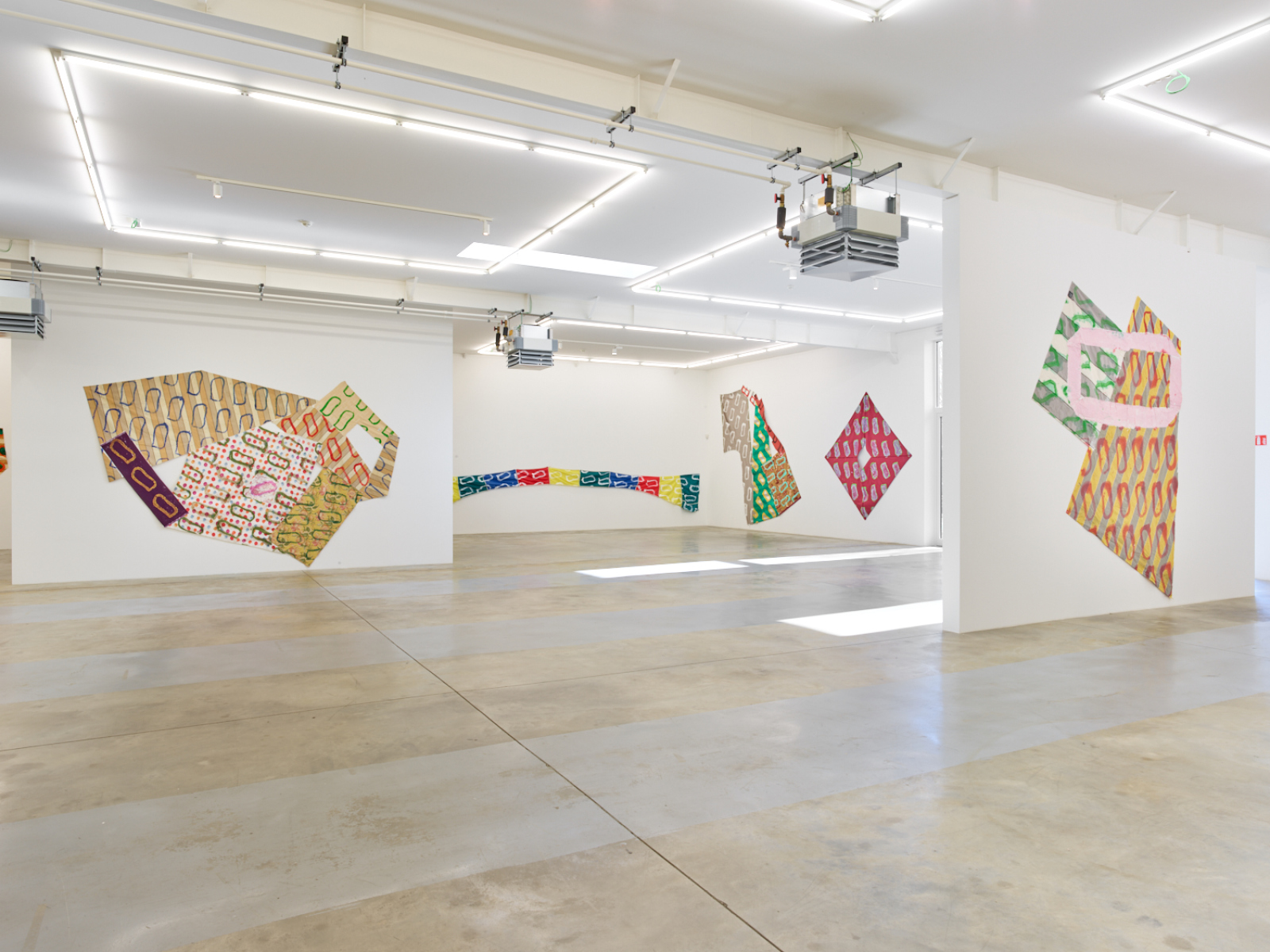 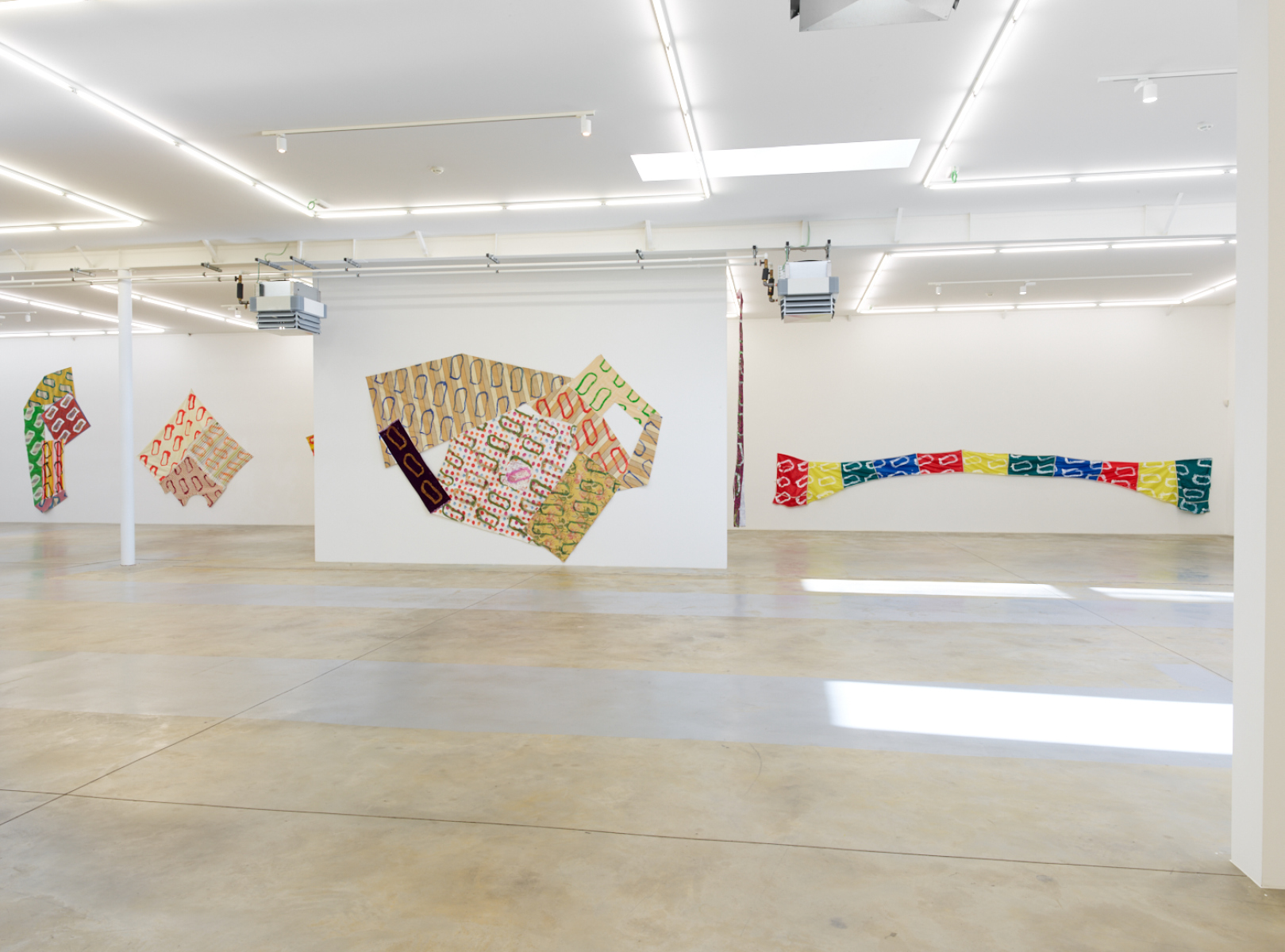 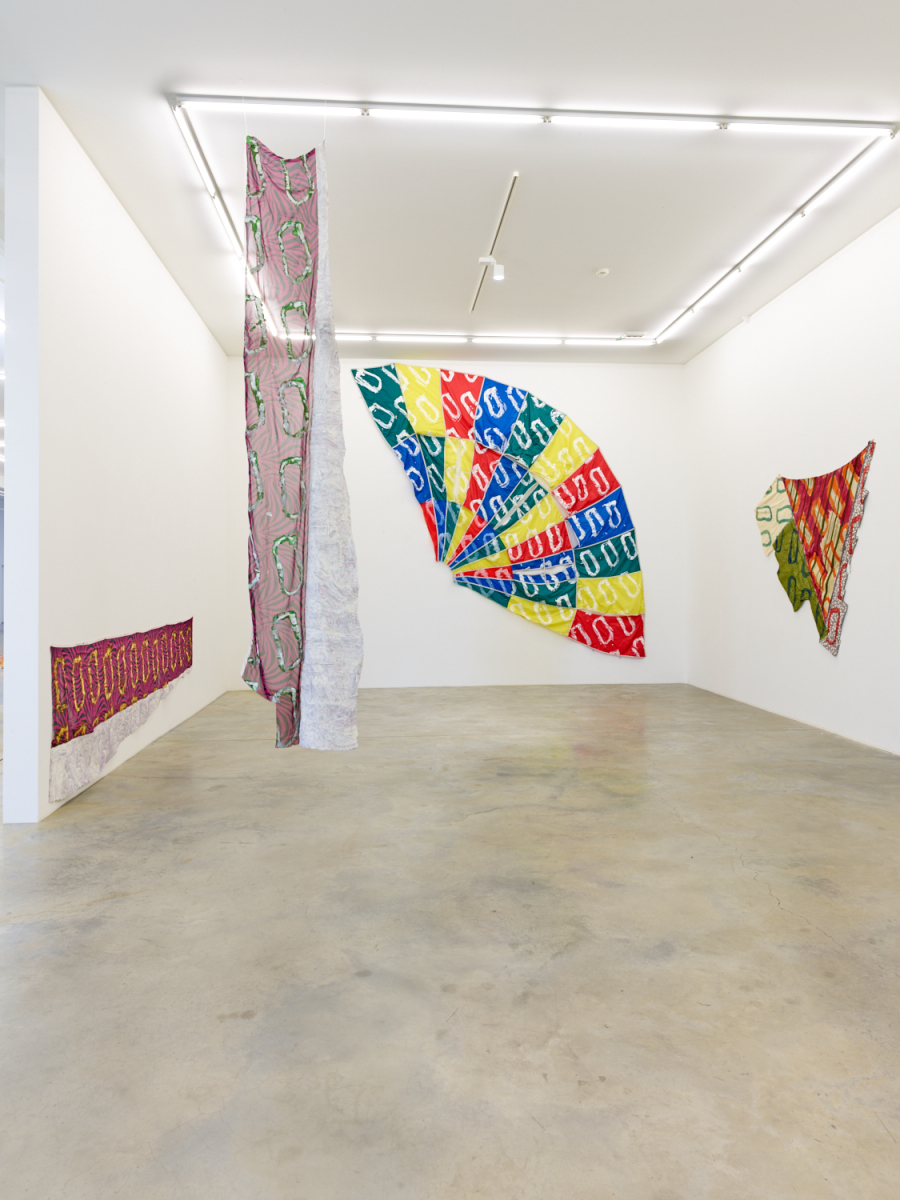 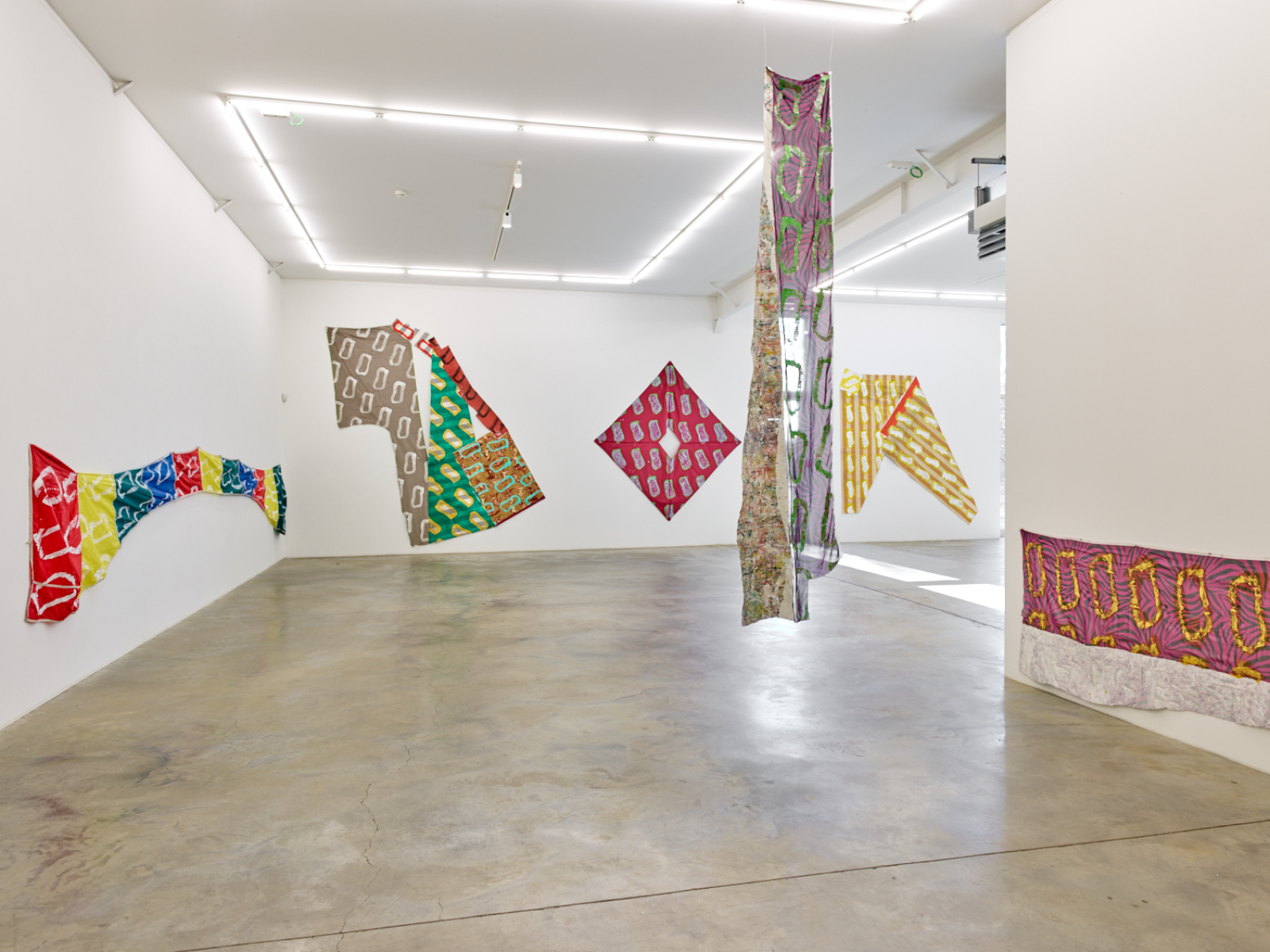 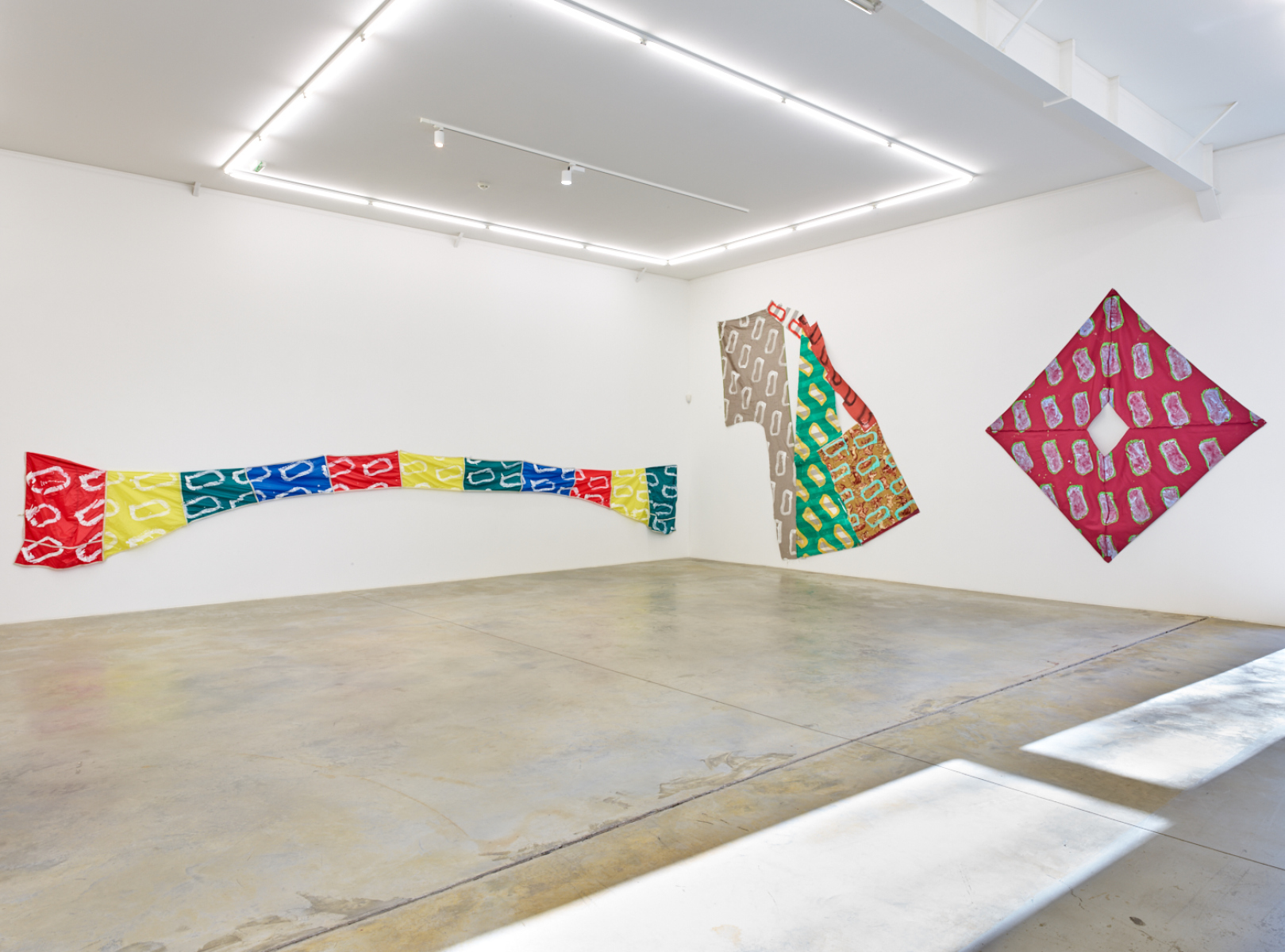 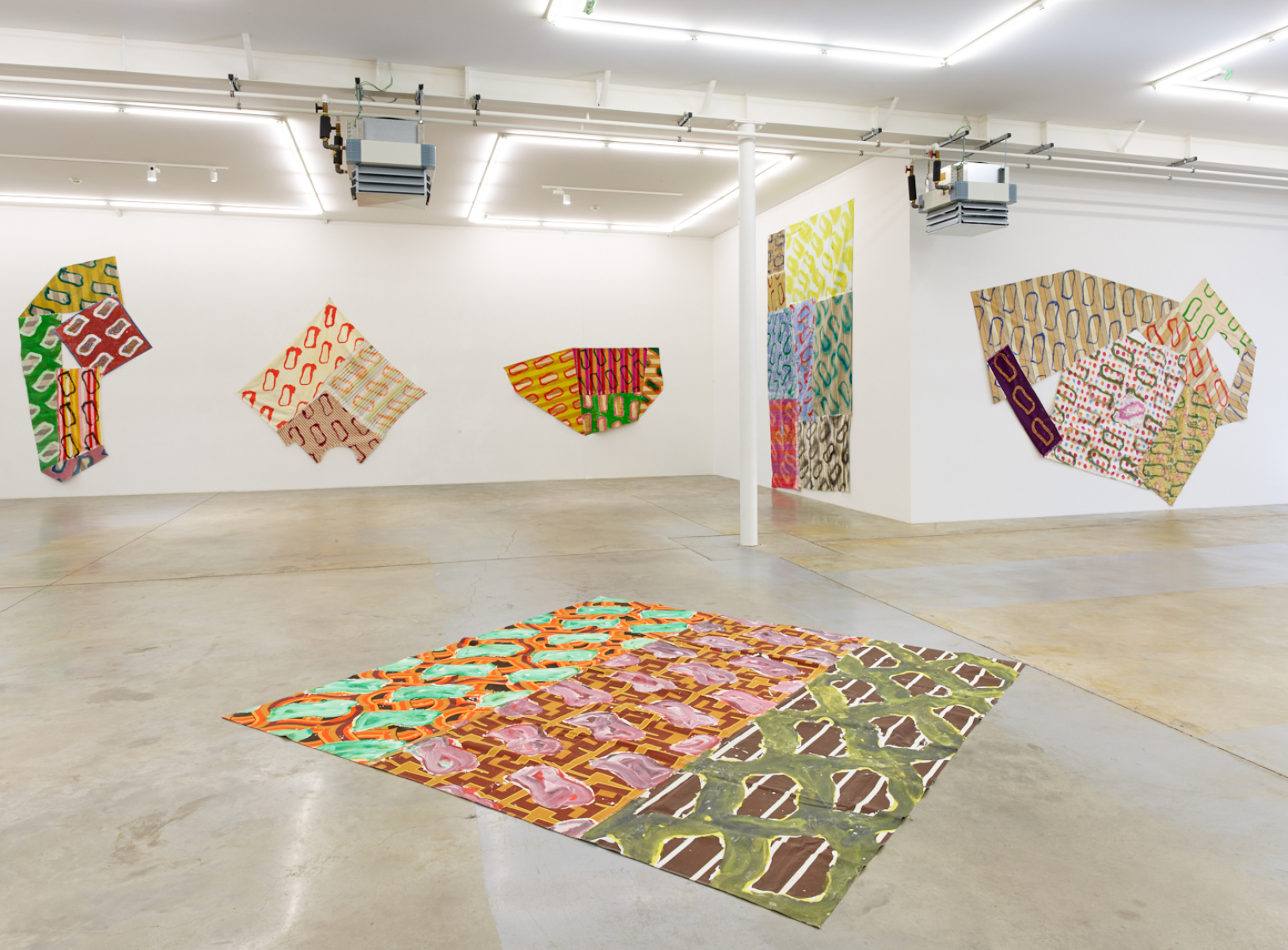 
Claude Viallat’s recent works presented at the Ceysson & Bénétière gallery in Wandhaff, Koerich, Luxembourg, belong to two inseparable registers of a work done daily with a stubborn persistence that reveals itself over the days as a kind of performance weaving measurable time and lived time. As if it were a question for the artist of assuring this preeminence that is so important and necessary for every human being. It is the incomparable sumptuousness of colour, intimately linked to our deepest impulses, to the inflections of the body’s life that holds us back and absorbs us, and which in this exhibition is exemplary. Whoever pauses in front of each of these pieces presented here, is seized, his attention grabbed, by the repose that, once made, these works assure us. This repose is liberating, liberating from that alarming kinetics that carries us dazed towards a finitude that always rebuts us. Who brought colour to this enveloping fullness before him, before Claude Viallat,? Cézanne, Matisse? Yes! Veronese, Tiepolo, Titian? Yes, everything comes together, condenses, is crystallised there in this signified magnificence: the sea, the sky, the Apollinian immobility and the Dionysian frenzy... Athens, in the distance, but also those Nordic fugues, blown by the Mistral and passing the Ventoux? Yes! And those raucous Andalusian scents? Yes! And far from all the debates about painting, colour, concetto and disegno, the outline of the forms, quite simply to fix them, establish them, arrange them for an always harmonised munificence, distributing luminous tides.

The form is always there, implacable as an imprint, an impresa, the memory of a hand or an emblematic figure. Parietals! It is the origin affirmed, for a long time, after the minimalist and ornamental repetition of the beginnings. It is a signal, a sign “of an almost universal value” to quote André Chastel. Far from being an elementary form, albeit devoid of the geometric simplicity that might connect it to a mathematical notion, it nevertheless has the strength of an archetype and the generic evidence of a “prime object”, to quote George Kubler. The result is an astonishing dialectical shuttle between – not theory and practice; that’s an old story – but between revisited memory and a modernist productivity always detached from any idealistic and futuristic aim. It is the attractive force of the “form”, condensed in its outline, generator of the energy of colour, making us responsive to it, that gives its carnal consistency to the enveloping space it deploys by populating it. This is how its power comes about. It is the attraction of this visual pleasure that holds us because, like any great work, these works reassure us: sometimes, human intervention excels more than that of nature. We do not escape unscathed from this reinvention of mythology. The hybrid form awakens those who know how to see, and the apparently scattered dispositions of the herds in the primeval pastures, where they graze peacefully – let’s not see here those scattered buffalos decimated by devastating killers who starved the Indians of the Great Plains – and the regular, handcrafted repetitions of the assembly lines of a productivism to be rebuffed. Using his own methodologies? Giap asymmetry manipulated by art.

This hybrid emblem combines a feminine body, that of a large prehistoric Venus, and that of a pacified bull. Returned to anthropology, which is concerned about the notion, it slips into a compendium of modernity of a rare complexity brought about by the dynamic alloy of symbol and sign. Thus, before a work by Claude Viallat, we go through the experience of a lived time. The almost original ancestral nature of the primitive tribe reborn in our present is thus manifested. Then a future opens up without finitude other than this human survival perpetuated by the proliferation of a living form similar to all the others present, past, to be born and to appear, but always individualised. A tribe of equals in search of life and not of the Ideal City. Otherwise, but this is implied, in this regulated dispersion of this form as tool, living, fixed and moving, unique, proliferating, we would then come back to centuries of debates, disputes, on Earth and Heaven, Life and Death, Fall and Redemption. We would have to play dice, with Jean Pic, Ficin, Calvin, Montaigne, Marx and Ricoeur, Sartre and Camus, Badiou and Sloterdijk, Bourdieu and Greenberg. And so many others! Which would be a bit of a handful, don’t you agree? A Viallat is a Viallat! You can see it as such and that’s enough! And, in the same time, at the same time, the whole history of art coagulates, thickens, spreads and concentrates in the incomparable splendour of colour. Revisited, revivified and given back to be seen. I must emphasise: what we see when we look at a work by Viallat, what grabs us, quickly appears to us as something other than what we see. But, let us be careful, for each element of this totality that a work by Claude Viallat suggests, because he composes and configures it, is de facto only what we see. Is this not this a conclusive reversal of Frank Stella’s worrying dilemma? Like Ellsworth Kelly, Claude Viallat borrows from Matisse the audacity to take advantage of a window: that of our former Museum of Modern Art for Kelly. And this is slightly true also for Viallat! Take a good look at the mechanical splicing of industrial tarpaulins and those made of scraps sewn, once upon a time, by a “tarpaulin maker” who made them as he wished: the partitions of the resulting rectangles are similar to those of window frames and French windows. To compensate for the frame that was rejected in 1966? Perhaps because these partitions define elementary geometric shapes by schematising them into harmonic rectangles subject to the golden section? We can risk the gamble. But Claude Viallat grafted on to them the ones he always started over, in tributes to their creator, like in the ritual of a potlatch, of the Fenêtre à Tahiti and the Porte-fenêtre à Collioure by Matisse. The near and the far. The shady freshness of the Occitan shelter and the languor of the ocean. We must always make room for Gauguin’s striking anxiety while wanting, in order to upset Picasso always above all respected – he painted bulls and “tauromachies” – to associate with Braque, a solid figure who throughout his life as an apprentice was attentive to the powers of materials and tools. A steady hand concerned to make professional use of his skilful tricks. No fa presto! Una buona fabbrica! A little Hesiod: peaceful and restless work, repeated, on a daily basis: you know, the work and the days...

This is what is at stake in this exhibition. The used military tarpaulins, disarmed therefore – a sort of readymade to be fitted out, to assist, to help – are doomed like everything else that is de-functionalised to be reused in a museum or in the decor of our homes and dwellings. From the use of colour applied like a cosmetic or a holy ointment to the skin of their surface, through the power of their object reality produced by nature and human artifice, they generate saturations, splinters, cracks, raising imaginary saviours as if emerging from the thickness given by their fibres and their weave. From there, one can ‘lacanise’ and ‘Bachelardise’ relentlessly. Why not? In some of these tarpaulins, geometric holes, skylights, fanlights open up, rolling up, unrolling, as all textiles, sheets, canvases and tarpaulins, flexible offshoots, sash windows do as are still preserved by Matisse and Kelly. They are made for surveillance and viewing from inside and outside – like in these large conical tents and tent canvases of which the artist is so fond. Here, of course, it was Picasso, Braque, Delaunay and Matisse who authorised these omens of spatiality reusing, in Viallat's work, above all, the artistic artefact in an in-between where the work is object and the object is work. The work can be recto and verso, to be placed in space neither as a screen nor as a border. Its completeness is played out in a future volume, a possible enclosure added to the openness. Claude Viallat is Gottfried Semper at work in real life. The artist plays the yo-yo between mirror and window, but it is indeed with Alberti that he dialogue, albeit not without a touch of slightly Machiavellian mischievousness. He plays, a little, a lot, with Frank Stella, as if he wanted to disturb his certainties by comforting them. The ironic use of the functionalist cut-outs of the shaped canvas points out the effects and reverses them in an affected way. It is a question that has been tormenting all painting for nearly three centuries: how can one be “stylish” without style? As we stated above, Claude Viallat contrasts the “hard” of minimalism with the flexibility of the adaptability of his works, initiated by the theorised practices of Supports/Surfaces, and with the various modes of implementation ascribed by whatever reality in which they find themselves. And the knotted stories that have to be unravelled, unwound, for another sequence. These recent works reformulate themselves from a void that is always reminiscent of a wall on which to unfold one’s story. It is existential in the revival and criticism of the American “shaped canvas”, thus returning it to its origins: a sort of phenomenology affecting the Sartrean “situation”. Every day, in each piece of painted canvas, then in each reworking of these pieces, having to submit to this duty: to question and query both the appropriateness and the imposed orders inexorably caught in the grind of routine. This is how the work is “made” and as we know, the same holds true for science and politics. It is so obvious that, in the early days, the invocation of Marxism by the artists of that Supports/Surfaces “moment” and which Claude Viallat never solicited, did not succeed – as happens with all works paved with good or bad intentions – in causing their works to fail. Great changes are needed to ensure that the lively, vivacious aspects of a tradition assuring our future against, as Henri Maldiney would have said, the landslides of history, be able to last. ‘Do not hesitate’, I might dare invite anyone who has the humility to look at these works, and to parody André Breton, ‘to drop everything. Let yourself go in the flow of rivers which, to quote René Char, do not stop at the parapets of the bridges of habit and history’. I don't give a damn about the maudlin decorum of a certain contemporary art paved with certainties and noble intentions! Viallat doesn’t care! A work of art is not a ballot paper! Take a Viallat, a "Viallat de Claude”, as Pierre Troisgros, another cook, said of his fellow painter; hang it up, place it next to strong works by Picasso, Matisse, Pollock, Stella, Buren, Venet, Newman and beyond so many others, by Giotto, Masaccio, Raphael and those Venetians already mentioned, and it will hold up perfectly. He is one of them. He steps out confidently, as one who goes, feet in his shoes, towards a last square, the same road towards a beyond despair. Really? People will tell me that I shouldn’t pretend to make art history just like that. Well, have I just quoted Maldiney and Péguy? And Chastel and Heidegger and so many others. I plead guilty and not guilty. It is the unimpeachable works of Claude Viallat that lead me to this writing. I can’t help it: that’s the way it is, as Dominique Bozo once said to me about Matisse. And if I do not say what they say perfectly well without employing, as I try to, the impotence of language, so much the better for Claude Viallat and so much the worse for me.