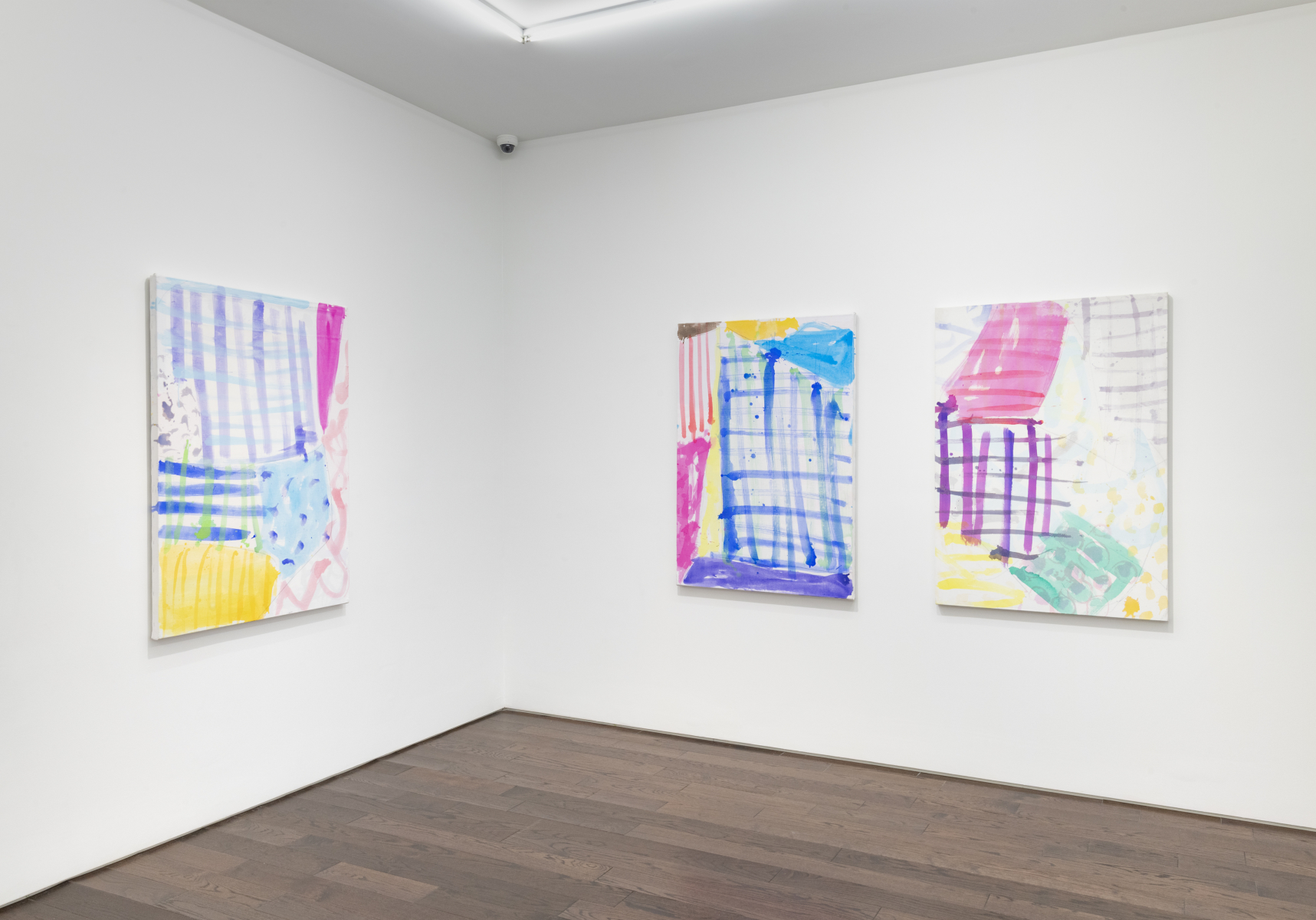 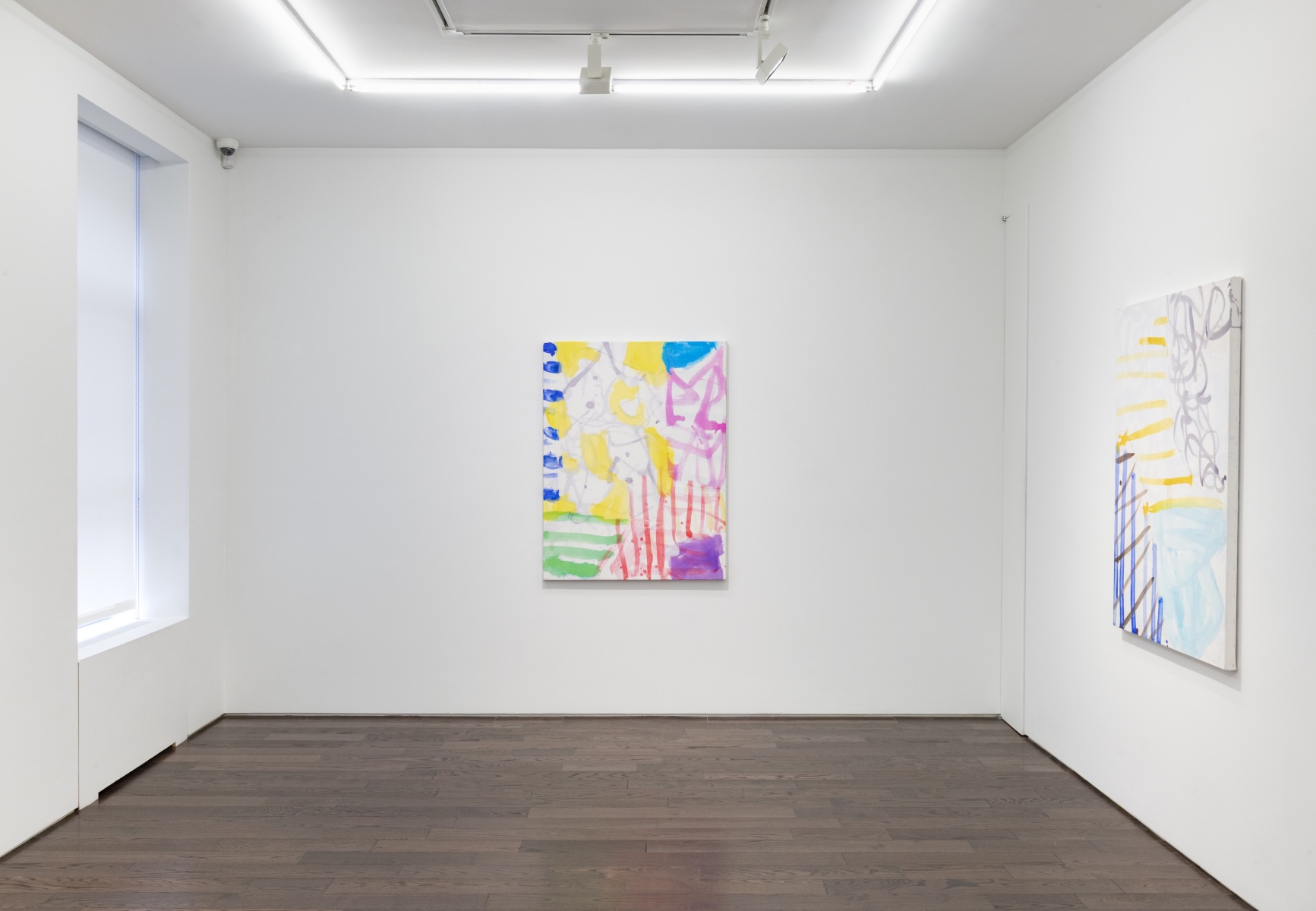 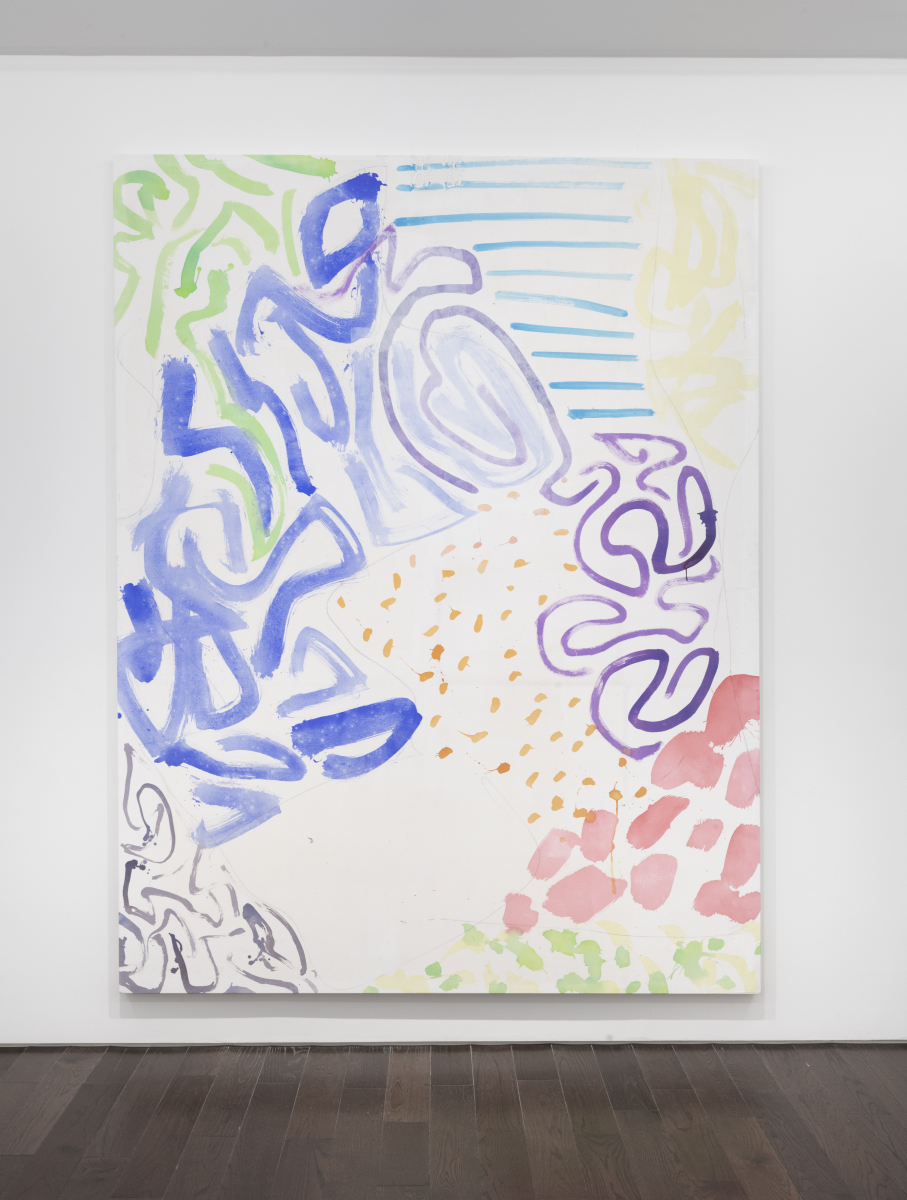 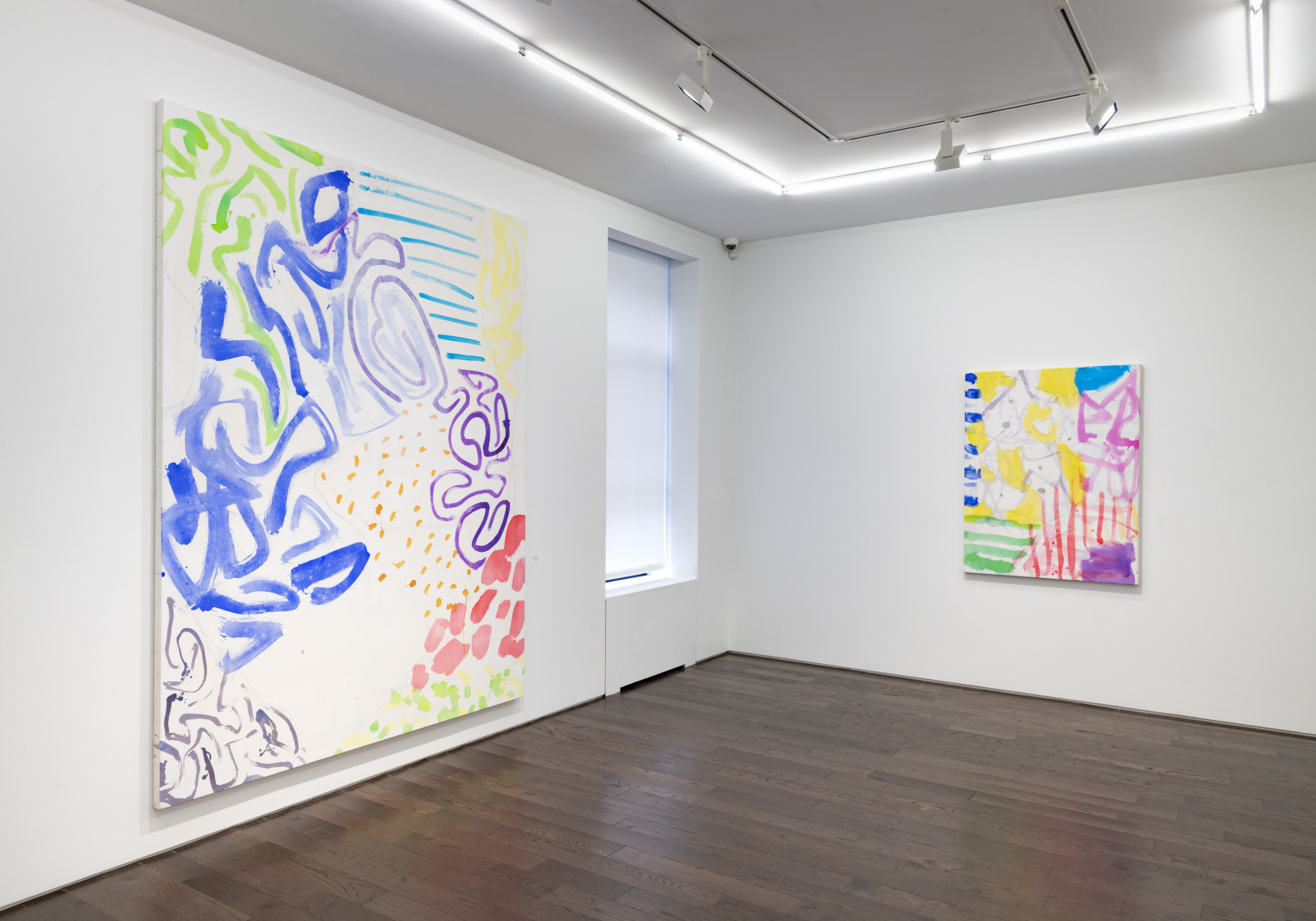 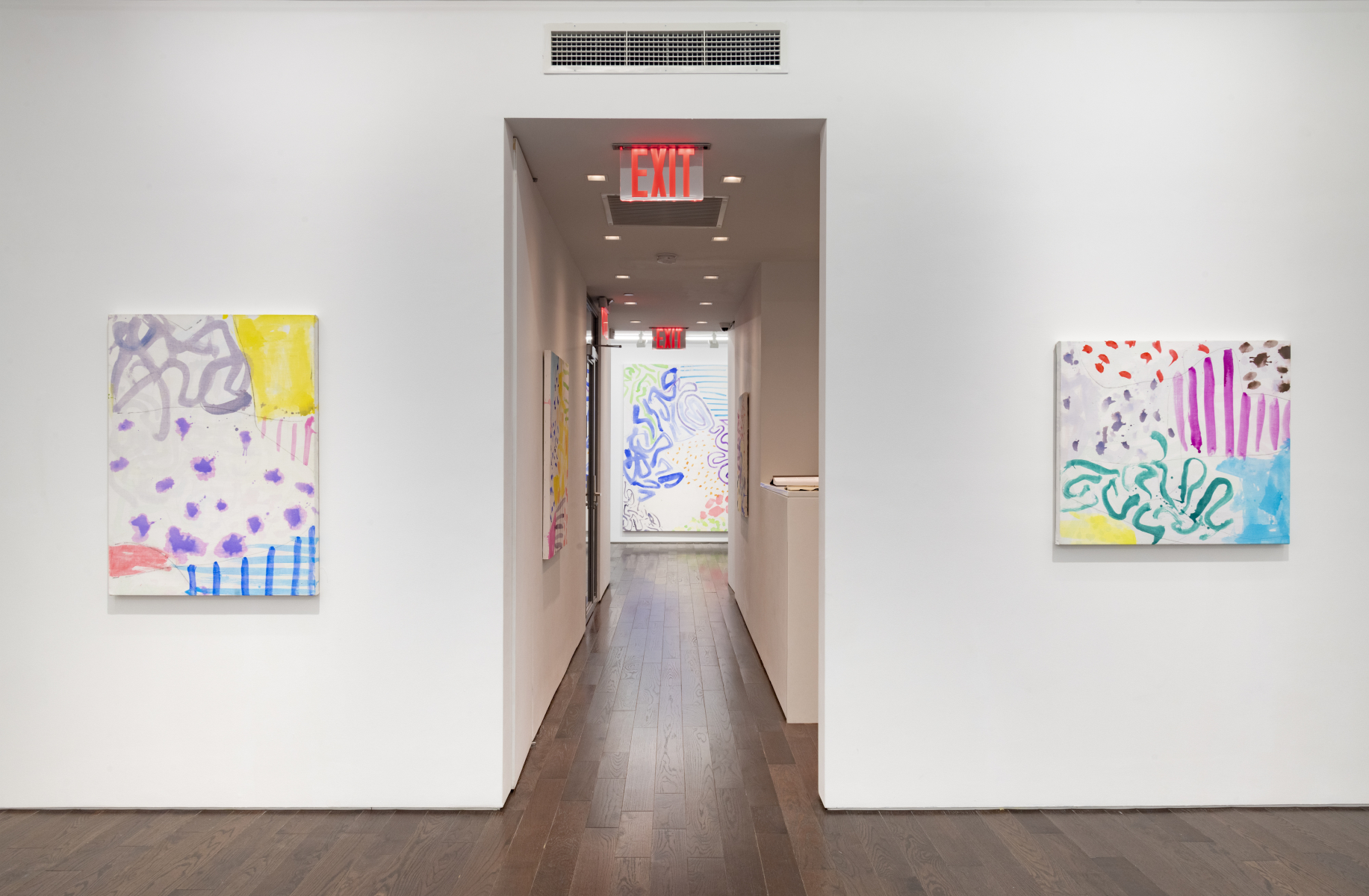 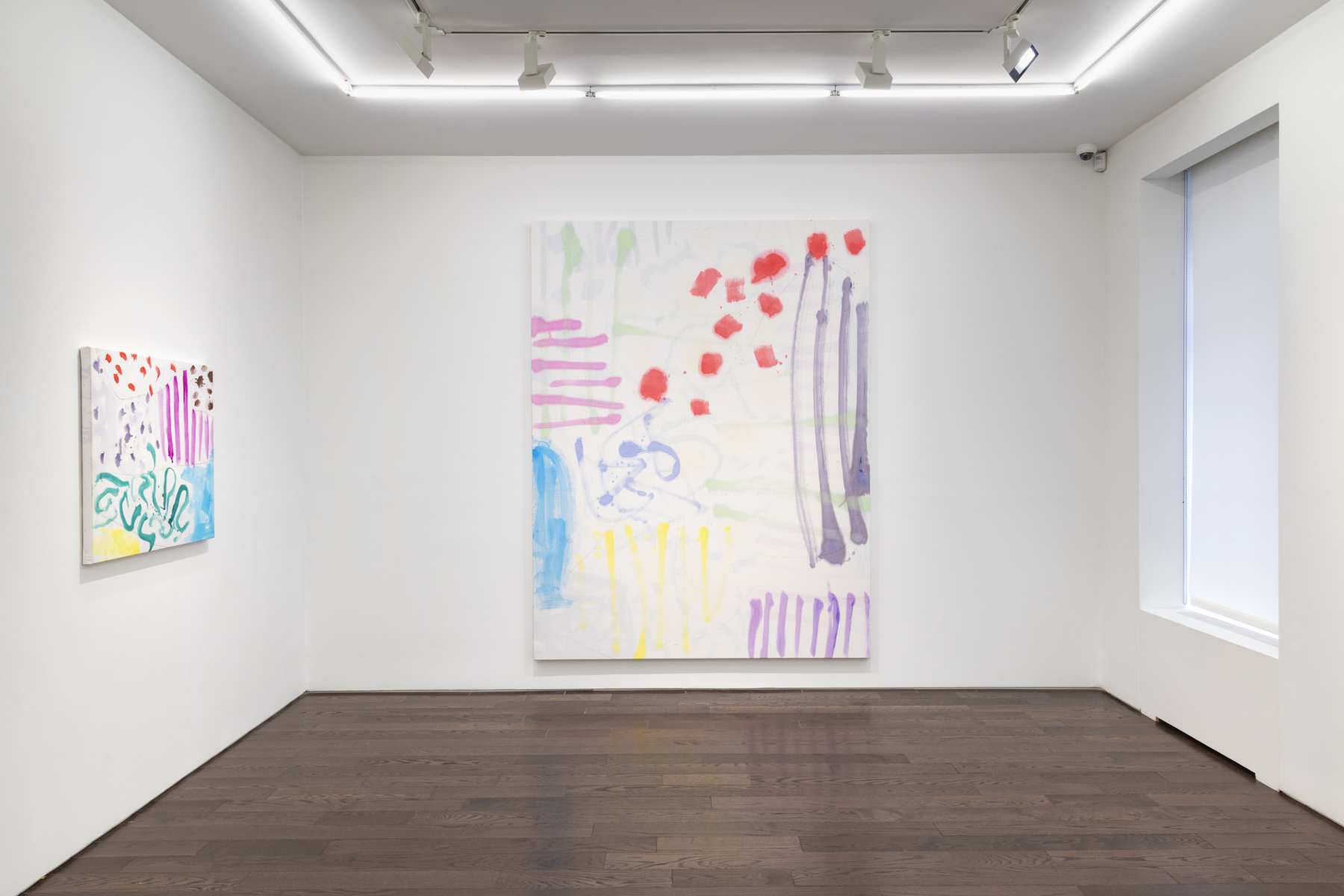 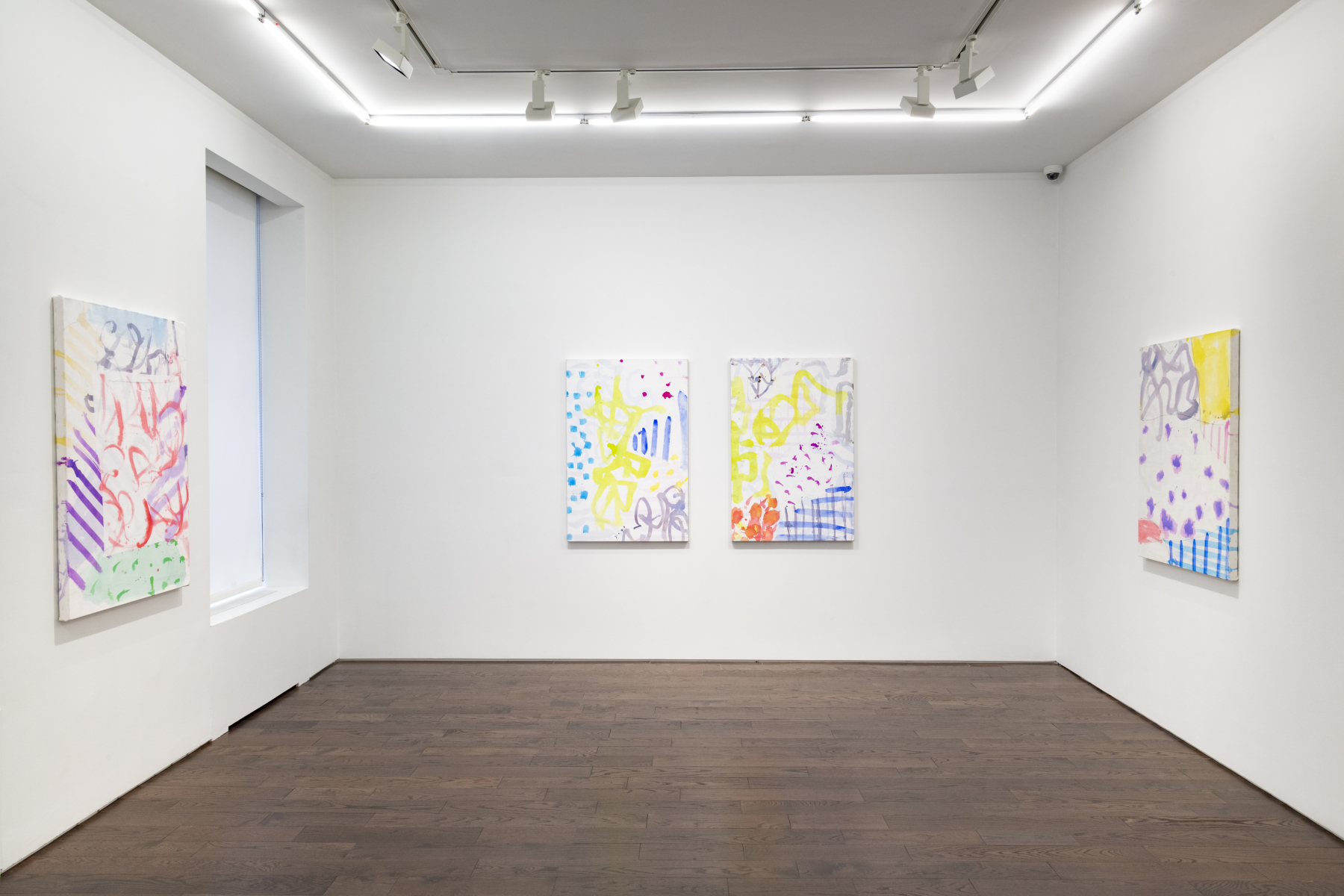 
The works of Franck Chalendard gathered for this exhibition are presented as a stream, a stream of paint that passes through each painting, associating them to a single energy but also to a single, same desire. The title chosen by the artist for this exhibition – Eating olives and making love – states this clearly. This desire for painting merges with spring, bearing a freshness and tenderness, a transparent light in air that is still sharp. The artist confides - it is like a longing to set off, to choose a path at the end of which we lay out a picnic tablecloth on which we eat and lie down.

One might think that these are images for paintings not yet realized, but we should look carefully at these pictures. We will then see the lightness of color permeating the fabrics, traditional painter’s canvas tastefully replaced with stretched bedsheet. We perceive the luminosity of the white and the transparency through which traces of the initial colors show through, overlaid by other veils. The paint is diluted and circulates between these strata, stimulating a movement back and forth between the surface and the forms, seemingly buried in the threads of the fabric. Thus, the stream that runs through the series is particularized in each painting, revealing a vitalist process at work in the thickness of the surface, renewing the emergence of forms while the spectral traces of a previous state yet remain.

While the painter’s previous series had a very fleshy dimension, with marks of formless paint gathered within the space of the picture, the current series has a more graphic appearance, with brushwork taking the form of a repertoire of signs composed of points, lines and arabesques. One might see in this a vocabulary characteristic of abstraction, indicated notably by the use of the grid. But the impulsiveness of the lines escapes such referential suggestions and rediscovers the primary dimension of these forms through an accumulation of simple gestures, which build up the picture progressively. In this series, what matters is placing ourselves before the painting, its desire and sensitivity to the world, in relation to color and its inscription on a surface, beyond the systems and discourses of art history. This newfound freedom could be compared to the works of Marie Heilmann or Joe Bradley.

Of course, the artist is perfectly aware of the game of possible references. This immediacy of the painting is constructed; it falls within the bounds of a process that is materialized by the superposition of the sheets, a game of appearance and disappearance, recovery and loss, erasure and construction. As in the manner of the French Supports/Surfaces movement, and Claude Viallat in particular, Chalendard has retained the active role of materials in this emergence of painting.

Make no mistake, for behind the apparent detachment of these paintings, it is about what painting does to us, the effect it has on us physically and thus it is about its essentials, that is to say, its desire.