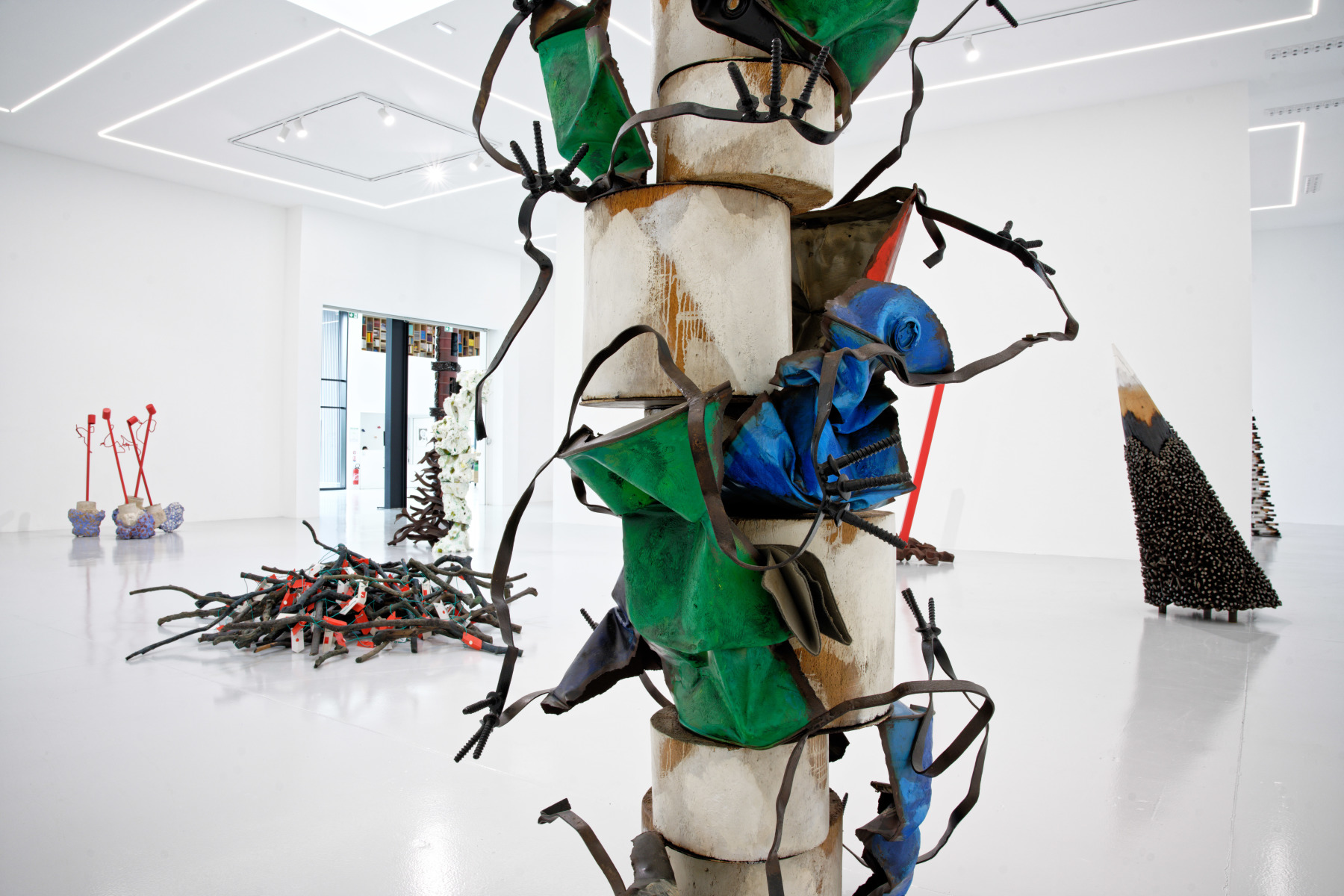 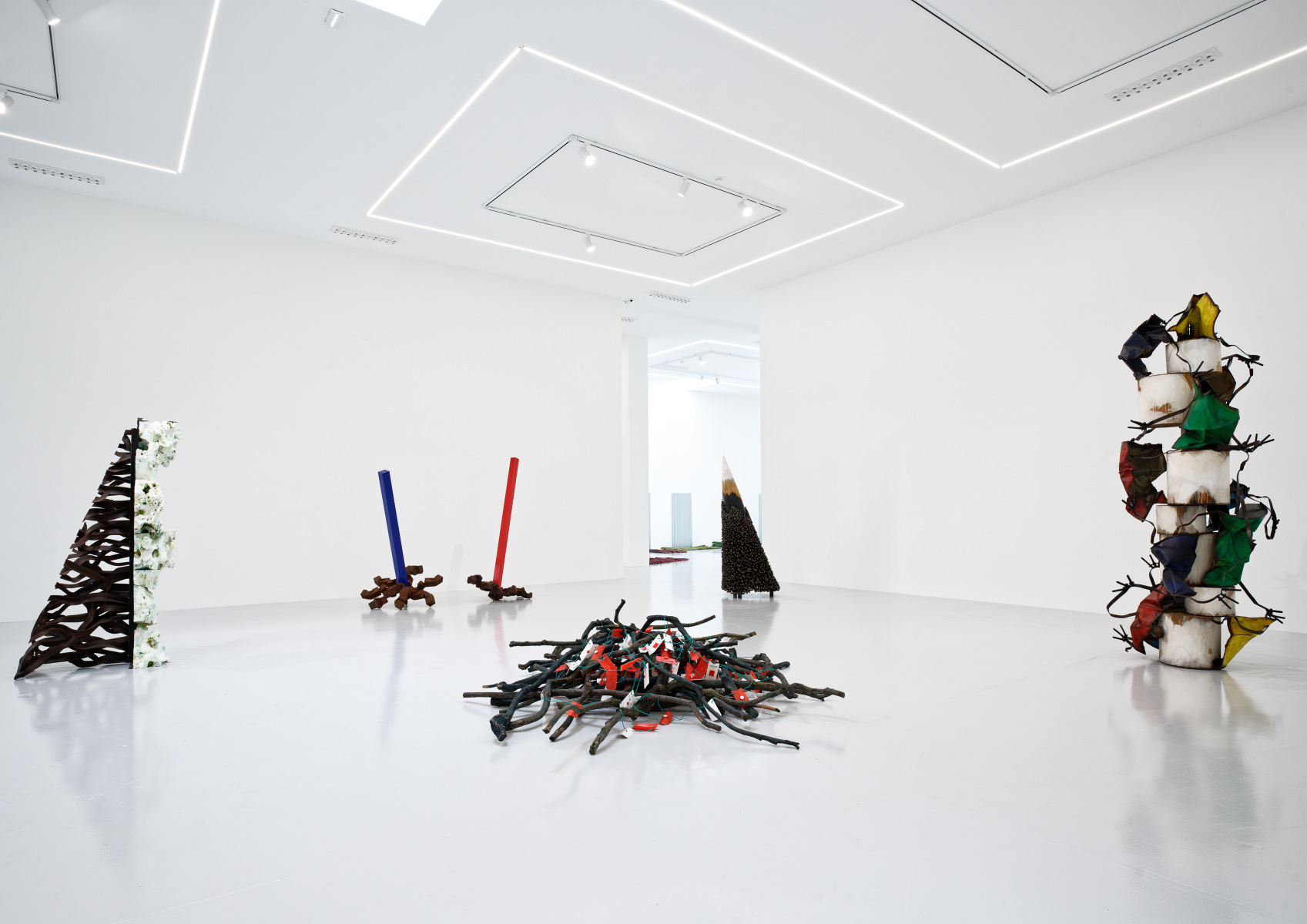 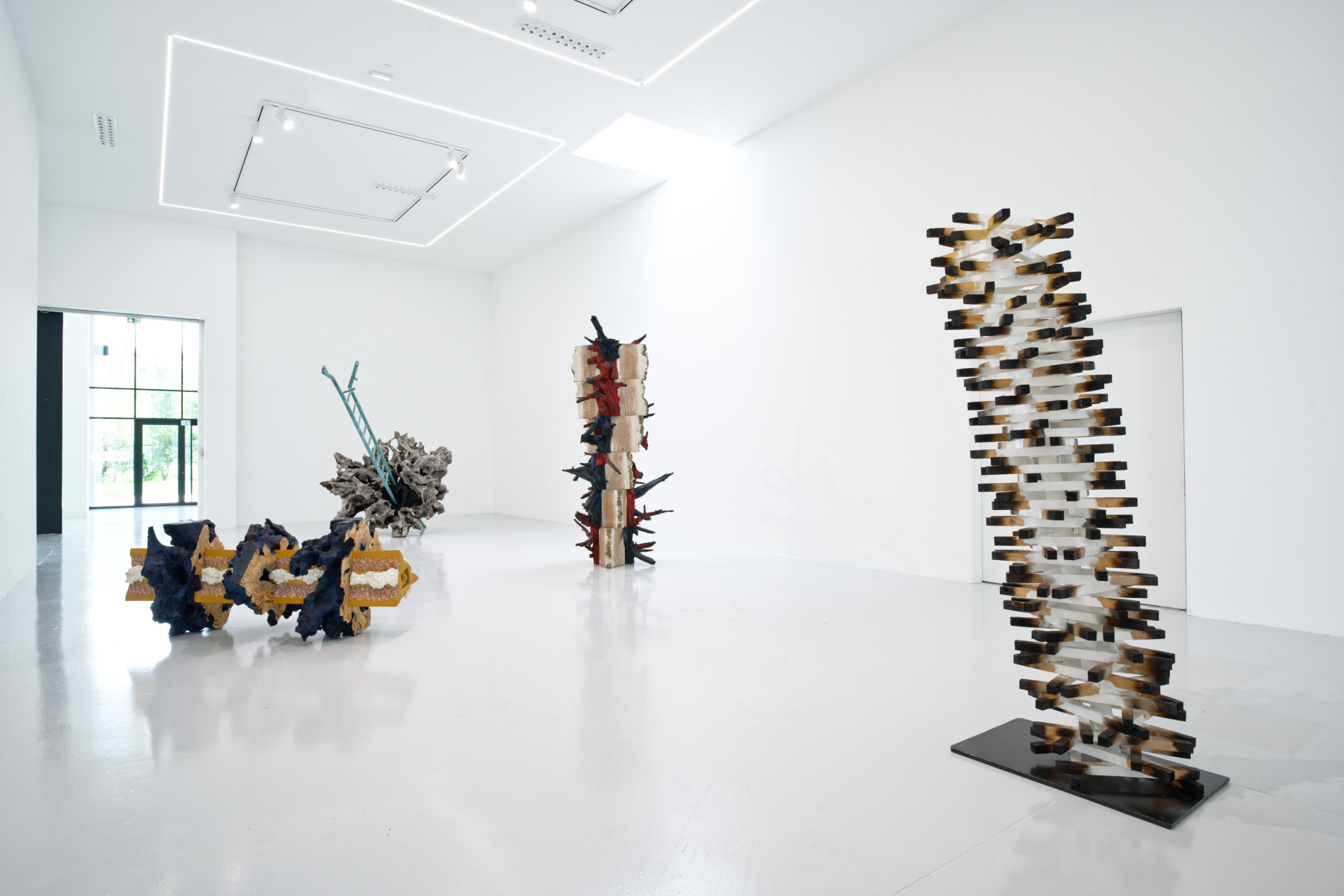 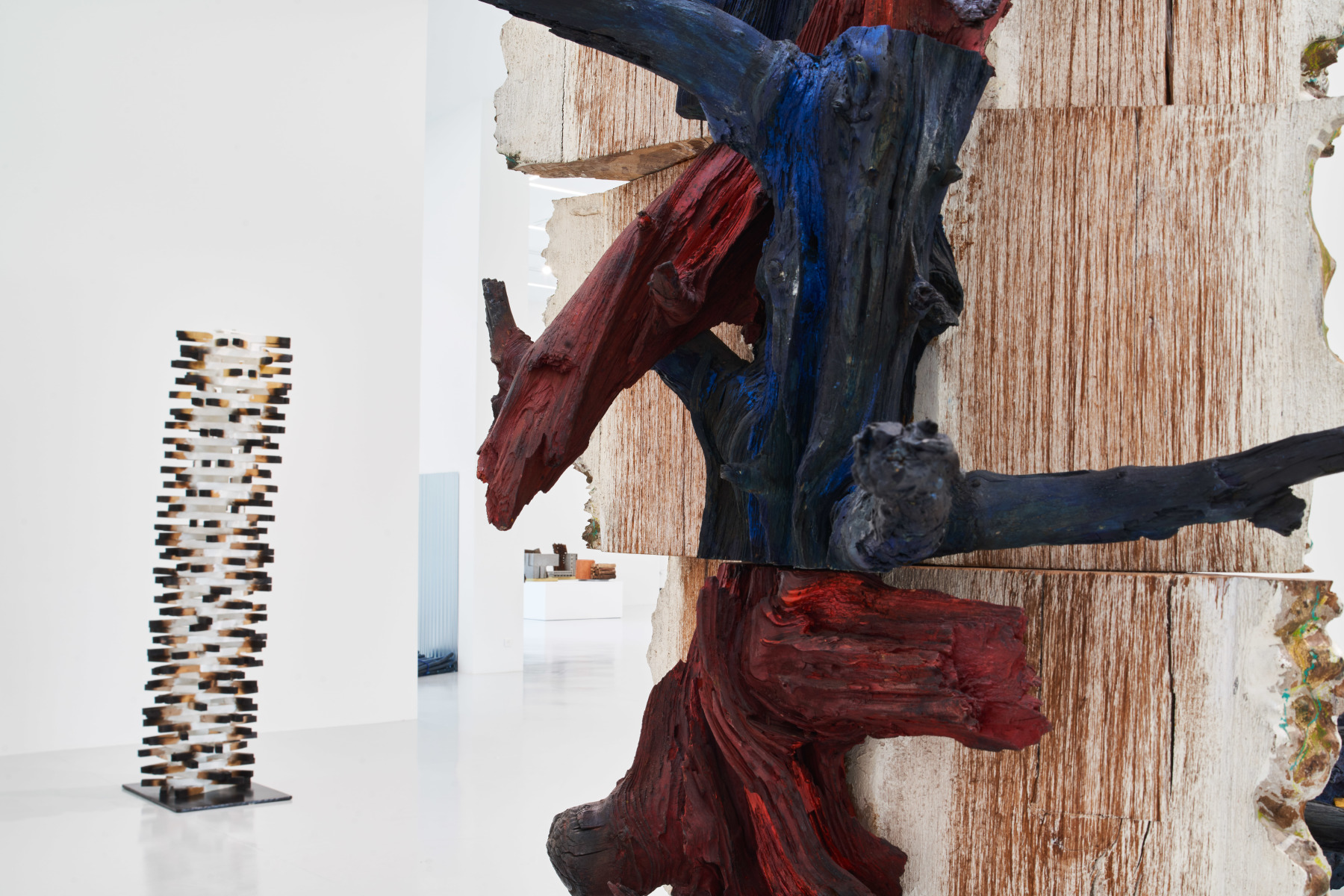 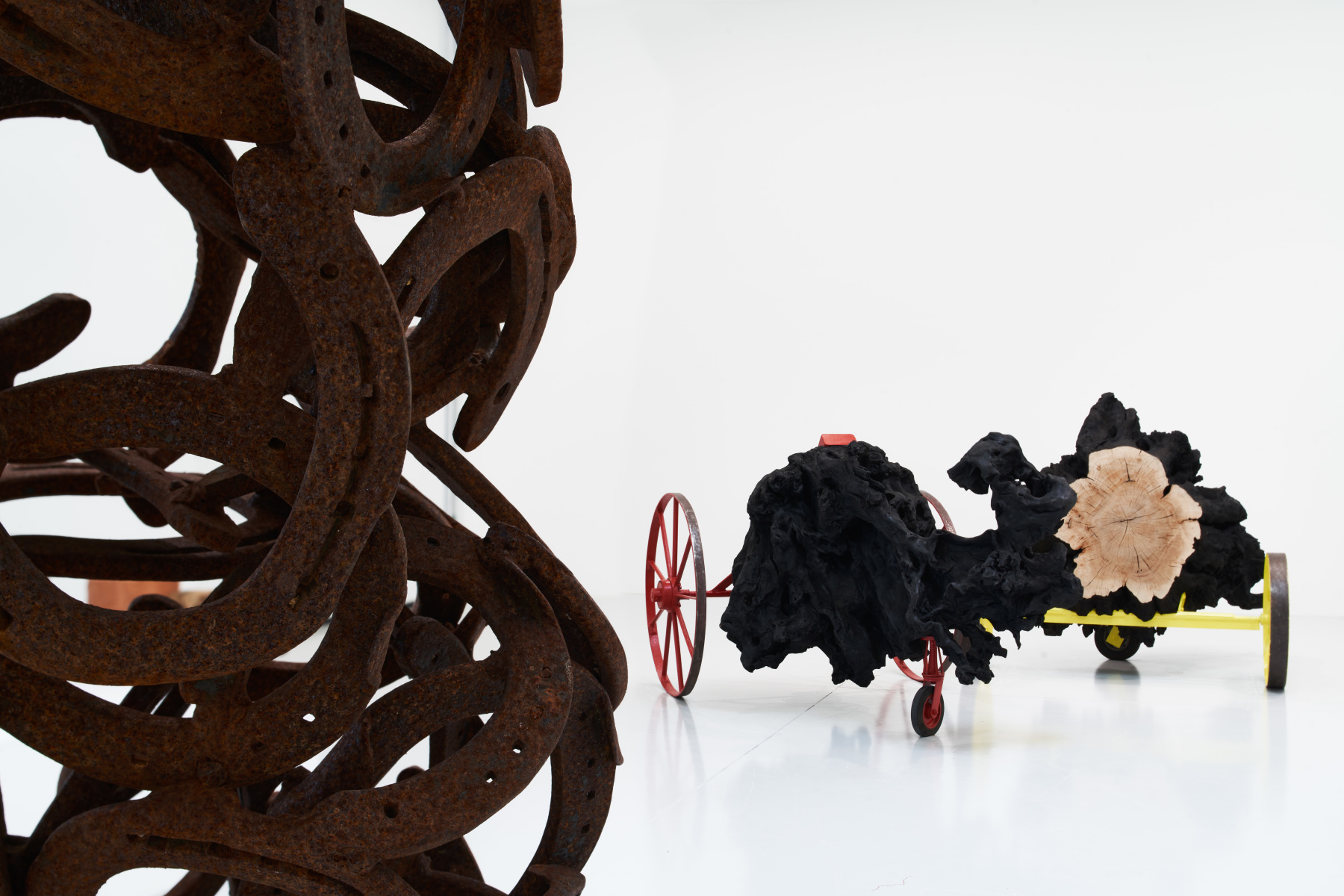 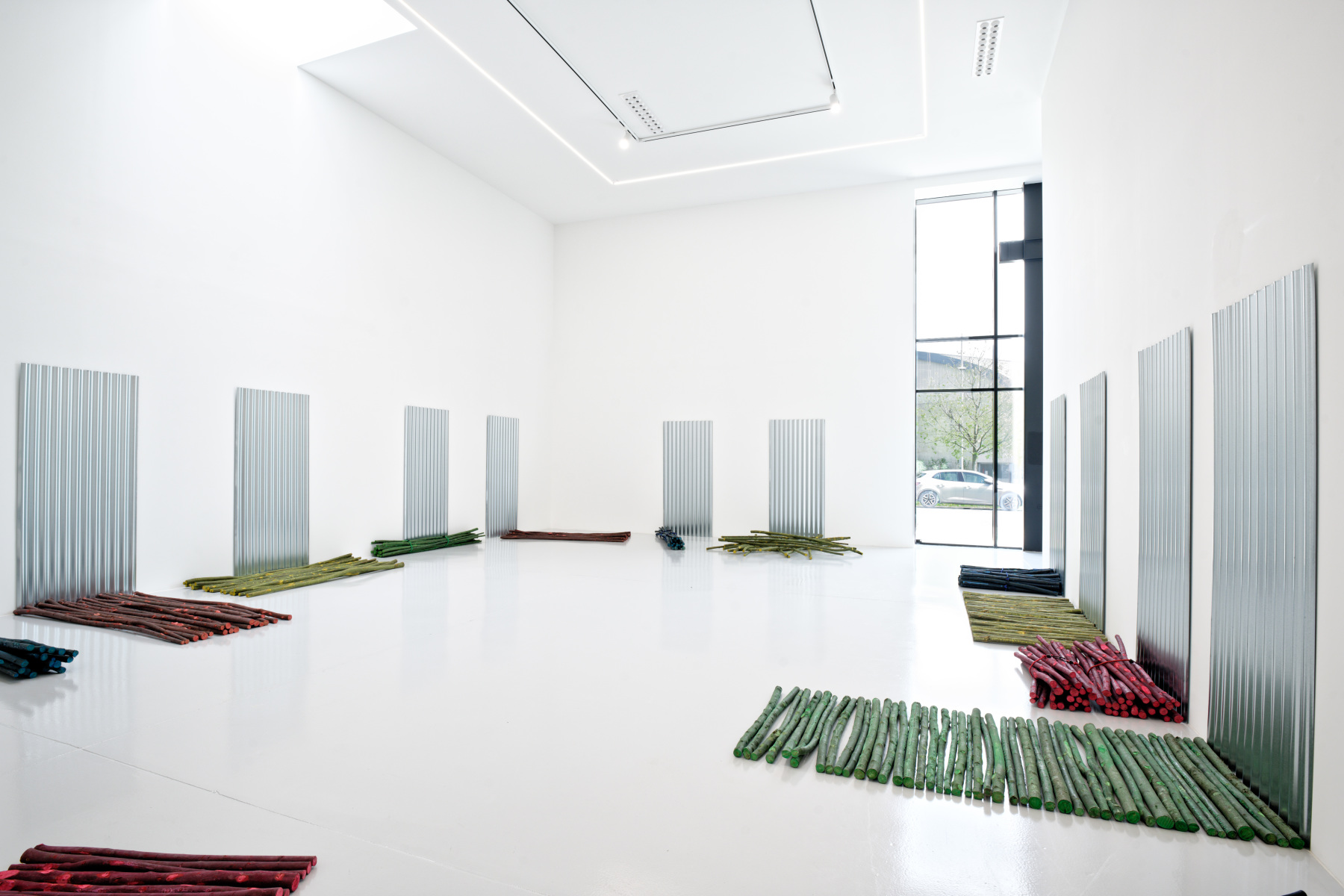 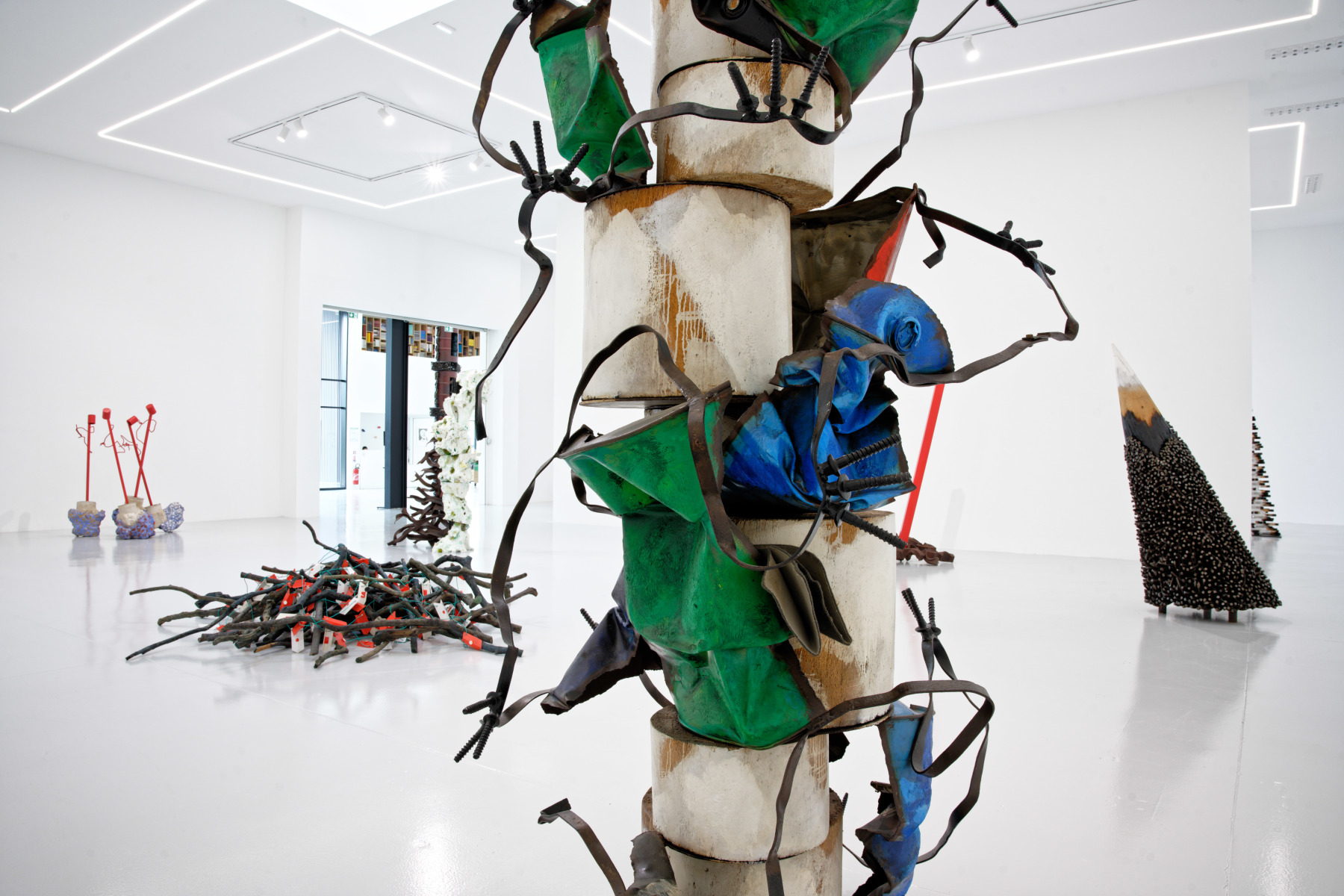 
The list of materials Bernard Pages has used in his sculptures for more than half a century is in itself an ode to diversity, as well as a polyphonic source of visual and tactile sensations. We become the mesmerized spectators of wood and wire mesh, colored granite and cement, calcinated wood, bone and Plexiglas, cans and lids, bricks and earth, undulated sheet metal and tinted plaster, rubber, rebars, ceramic and steel beams, rusty steel, and galvanized iron, molded lead, straw and manhole cover, cement tiles and copper, horseshoes, tubes, and steel beams, metallic spikes, sandstone pebbles, pink granite, chalk slabs, wire rods, gold-plated lead hulls or foils, concrete, tiles, bombshells, barbed wire, floor tiles, construction string light, and so on. But far from getting himself submerged by such heterogeneity, which could precipitate his work toward incoherent dispersion, the artist examines these materials carefully, and, starting in 1967, through his Arrangements series, paired them and unveiled their tangible connections made of oppositions, differences, parallels, contrasts, and resemblance in forms, lines, volumes, textures, density, etc.

The work of Bernard Pages is based on antagonisms, dissimilarities, contradictions, and plurality, and seeks to find coherent associations, dynamic unions, and relevant combinations, a tensorial connection between the Same and the Other. In that regard, Pages’ recurring and “terrible” nightmare is telling, in which he finds himself in front of a pile of fallen rocks disorderly dispersed in a field and doomed to the endless task of ordering such chaos. In 1984, he noted: “It is true that I don’t like chaos. My work (…) is looking for a sort of balance between order and chaos.”

Bernard Pages’s passion is to make sculpture “move” –“The Fléaux series is a dance”, he says- as well as slanted; to make it vibrate with the dualism of equilibrium and disequilibrium. The artist’s career is a long litany of “sloped”, “wobbly” and “crooked” works, “uncomfortably seated, and visibly unstable”, tilting and flirting with the void, or “laid on the side like boats at low tide.” We can think, for example, of the Larrons and L’Échappée series, as well as Sculptures I and II, with their distorted and crooked metallic bodies pointing at the sky; or of the pieces of Jardin de Chambord, Gloriette, Chevêtres, and Acrobates, which “use the full column shape again, yet still unbalanced” (B.Pages). As well as La Déjetée, so shifted and off-centered - “eccentric” in the double meaning of the term-, both robust and dynamic, standing straight despite its gravity center having been displaced three times, playing with the laws of gravity to the extreme, facing the risk of disequilibrium, collapse, and rupture.

Pages’ fondness for the dangerous oblique also shows under various forms in the series Les Profilés, L’Echappée, Tout au bout, La Pirate, and of course, Pals. About the first work he did for Pals, the artist wittily said: “I spiked its ass for it could no longer stand straight”. Sculptures are alive and should be moving, balancing with virtuosity even. Hence, we won’t be surprised to learn that Bernard Pages admires trapezists and other circus acrobats deeply.

Thus, the sculpture does not represent anything, neither our own image nor the image of anything else. It is only concerned with sculptural matters… but, by being so, it ends up speaking to us, looking at us, and inviting us to sculptural thoughts and imaginative pathways. The subtitles of many works could in themselves be invitations to material daydream: Le Chapeau de Venise (1984), Le Cimier mauve (1986), L’Electrisée (1988),  L’Ecorchée (1989), La Rayonnante (1989) , La Lambrusque (1990), La Noctambule (1990), Les Chevêtres (1992), Le Dévers aux falbalas (1994), Le Dévers aux fruits d’or (1997), Les Ceps en foule (2000), Les Larrons (2004), Le Balcon sur la mer (2009), La Pirate (2011), L’Echelle de Jacob (2017-2018)… In the end, the crooked and the slanted might talk of our frailty and vulnerability. The frequent balance/imbalance dualism, often pushed to the limit of collapse, might simultaneously hint within us at The Walking Man and The Staggering Man by Giacometti, who once said: “I have always perceived or felt the fragility of human beings, as if they needed tremendous energy just to stand up”.