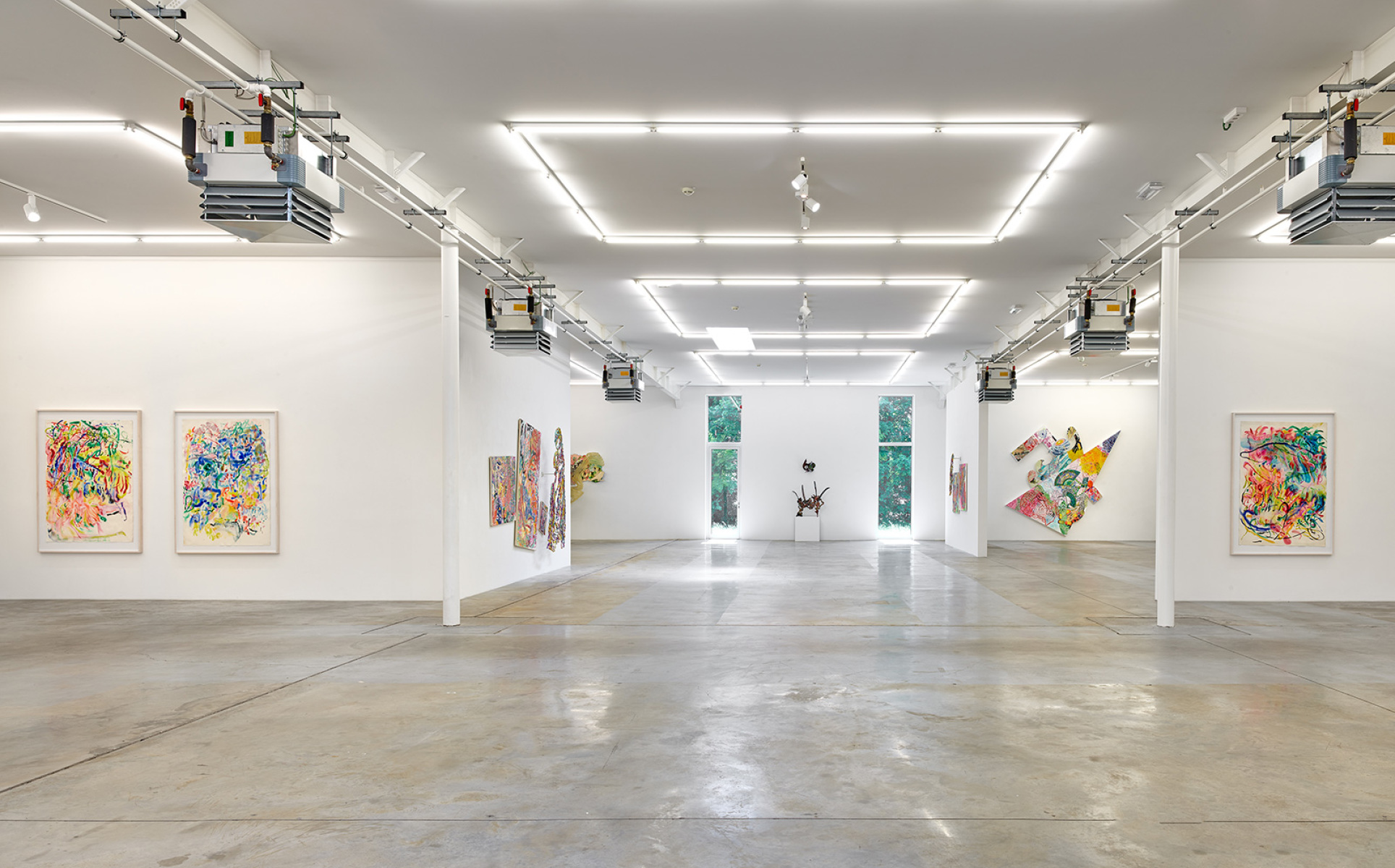 
The many devices of Nancy Graves

Nancy Graves, an American artist of international renown, rode to fame aboard unforgettable camels made of fur, wood, steel and polyurethane. They were featured in her first retrospective, in 1971, at the Neue Galerie im Alten Kurhaus, Aachen. It is with pleasure that Ceysson & Bénétière will display an extensive selection of her mature work in their Luxembourg gallery, so close to the first European institution to recognize her extraordinary talent.

Graves is an artist of wide-ranging culture who wears her learning lightly for our delight. Created between 1976 and 1994, the sixty works on view showcase the diversity of technique and imagery she harnesses in the research based praxis that made her familiar with museums and archeological sites the world over.

Her works on paper are represented by large scale prints and watercolors. Using a loaded brush on moist paper, Graves exploits all the potential of this wet-on-wet technique. With a brush almost dry or heavily loaded, lines are thin, discrete or bold. Color is saturated, transparent or stippled.

The museum-like space of the Wandhaff gallery gives pride of place to the boldly colored metal sculptures Graves undertook at the beginning of the 1980s. The Wax Works are tabletop bronzes  composed of elements cast from a variety of organic and man-made items that Graves welded together and redefined with her vivid patinas. To  produce these sculptures, Graves would first cast the individual elements using the lost wax technique ; then she enamelled the resulting bronze sculpture. Graves is one of the foremost American artists to renew with this ancient craft technology, born in the Indus Valley  over 6,000 years ago.

Among the larger sculptures, Perceptual Threshold (1990) appears at first view to be a clever reflection about line, plane and volume. Depending on one's point of view, the coppery red ribbon and the iron-colored chain delineate a picture plane. Only the composite base breaks the illusion that the 3-dimensional sculpture is flat. But when the perceptual threshold is crossed that illusion seems far more perverse, or shall we say surreal, for the chain floats graciously in an S-shape without collapsing under its own weight.

The show also includes wall sculpture such as Nasua (1993), whose title invokes Nasua nasua, the ring-tailed coati, an omnivorous, social, forest-dwelling mamal found throughout South America. The relief itself is composed of various elements, none warm-blooded. Bits of a sculpted Egyptian falcon-- the torso and a leg, are the easiest forms to identify, along with a crested Aegean helmet. Separated from its body, the falcon's leg is attached jauntily the helmet's crest by only one toe. Between them lies a lattice of five small fish, most probably sardines, since the were cast directly. Color is enhanced and rendered even more mysterious by the adjunction of glass in the enamel.

By 1991, it is clear that Graves has nothing left to prove regarding her status as a painter. Surface and medium are the least of her pictorial conquests. In Care of Solitude combines glitter and gold leaf with oil paint on stretched canvas. Not one canvas, but two separate canvases. One of them appears to be attached to a lacy anodized aluminium form that actually rests on the wall. The three elements hold together by their  chromatic coherence and intertwined imagery. 1991 is also the year that the  poems of Octavio Paz were published in their entirety in English translation by Eliot Weinberger. Graves used lines from two of the poems to name paintings. On the Changing skin of the moment and Fat drops of the milk of silence are both executed in oil and acrylic on shaped canvas. The shapes of these canvases are particularly pointed, for they include draughtmanship's sharp tools, that is to say right triangles, protractors and French curves.

One of the earliest paintings  in the show is titled Polytropos (1982). Created from traditional oil on canvas, its title is a Greek word familiar from the Odyssey. In the first lines of this ode, Homer calls Odysseus « Polytropos ». The adjective refers to Odysseus' complex and multifaceted nature as a bold warrior, skillful negociator and wily manipulator. It has been translated as « much travelled » but also « of many devices ». What better word to describe the artist herself.