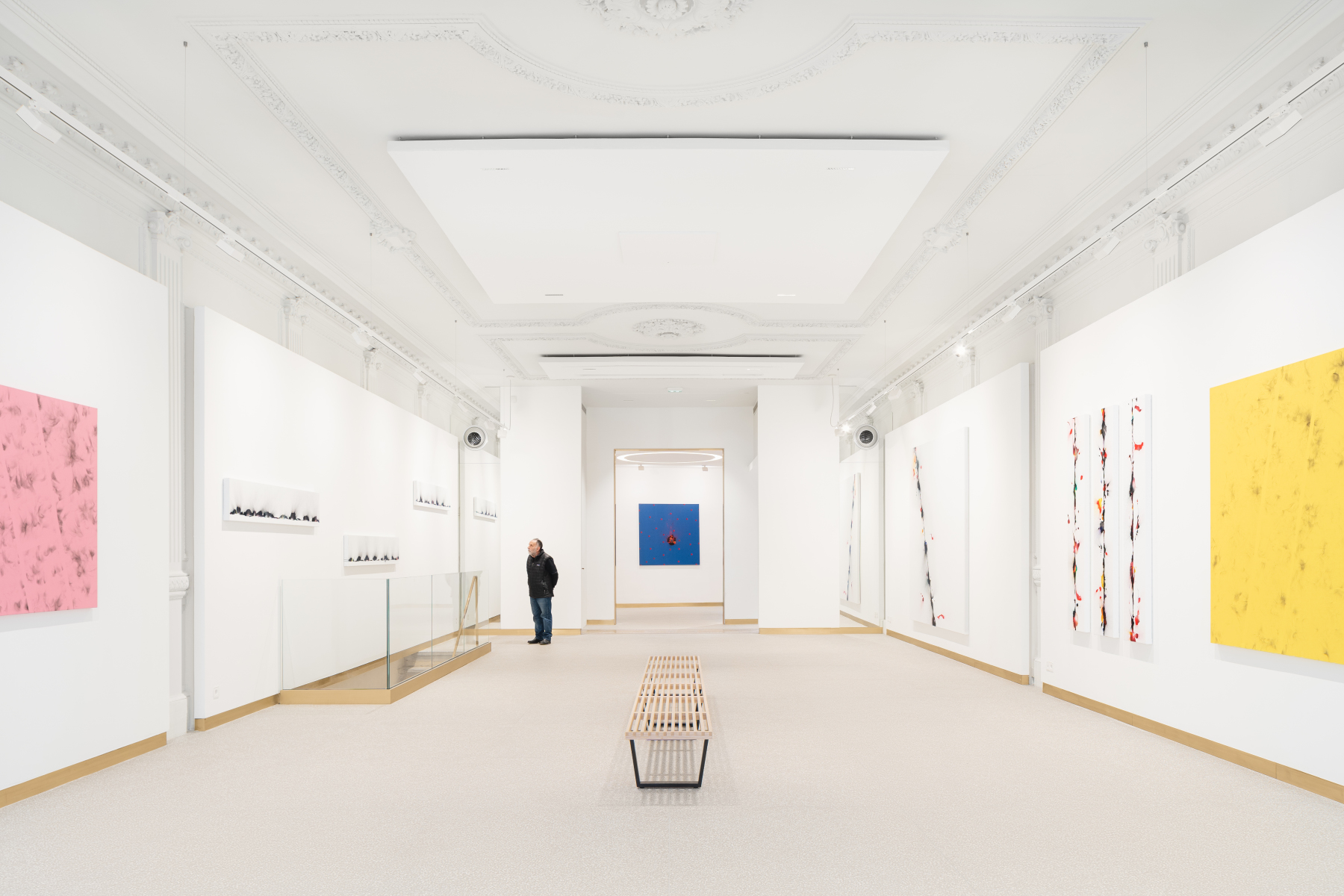 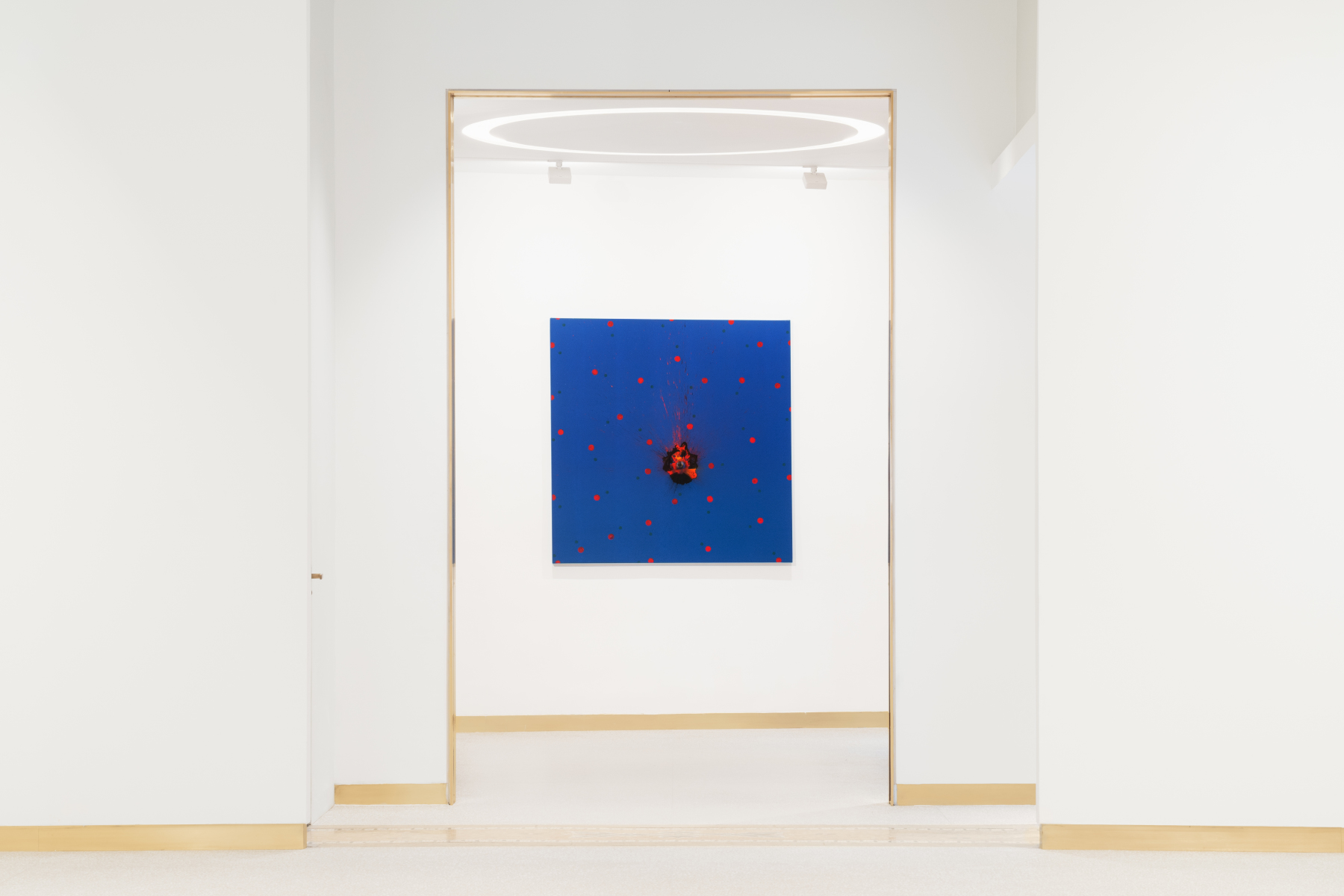 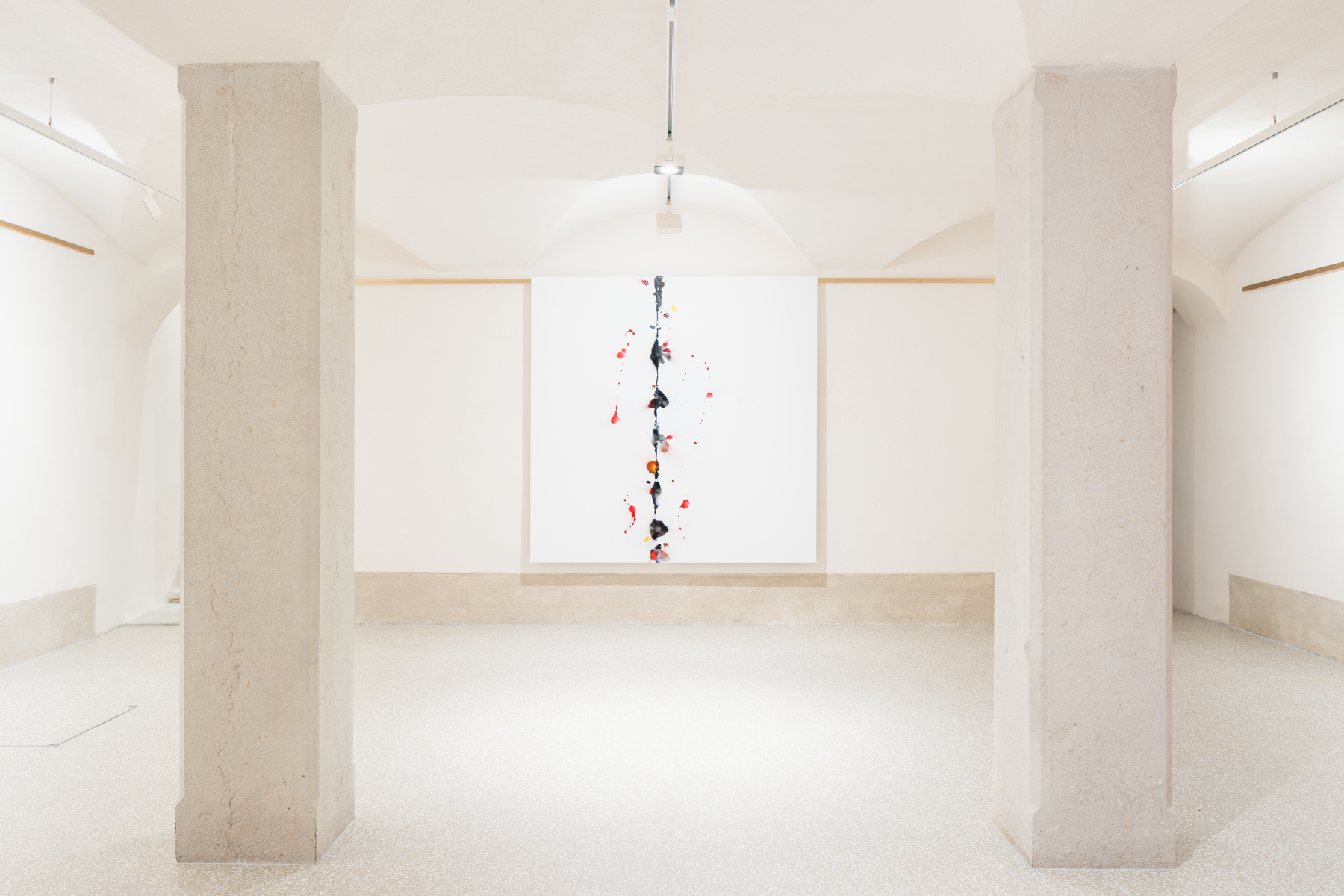 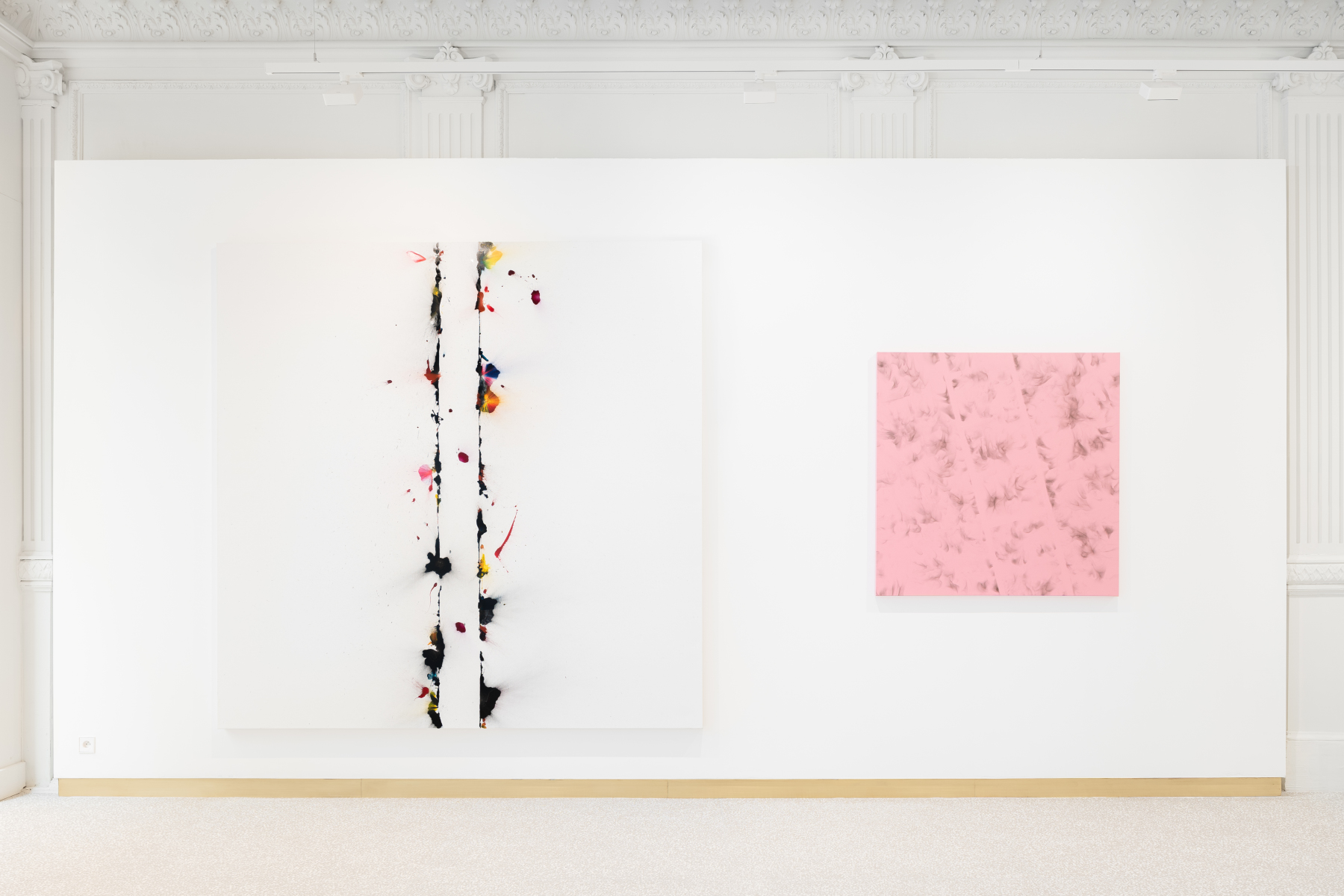 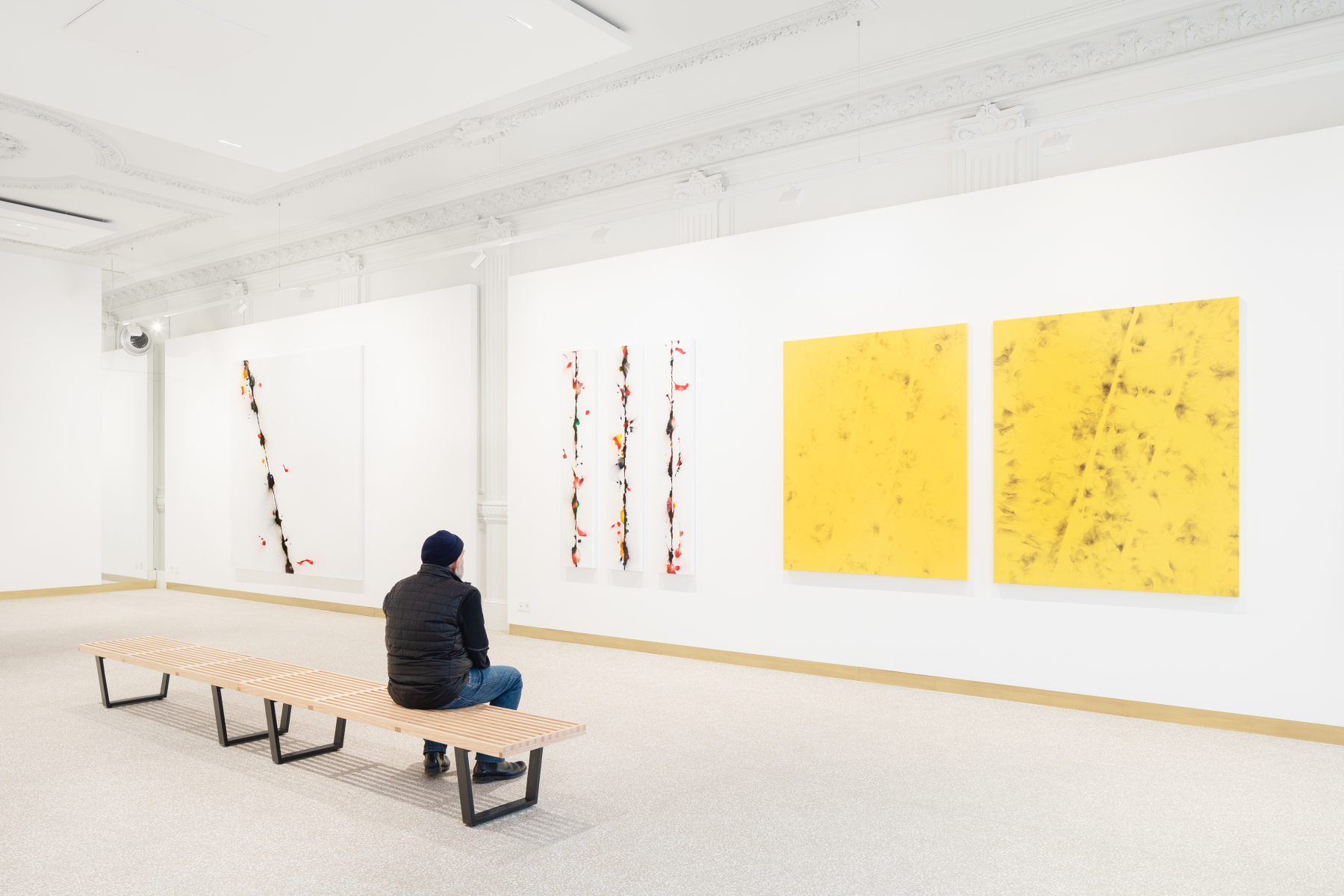 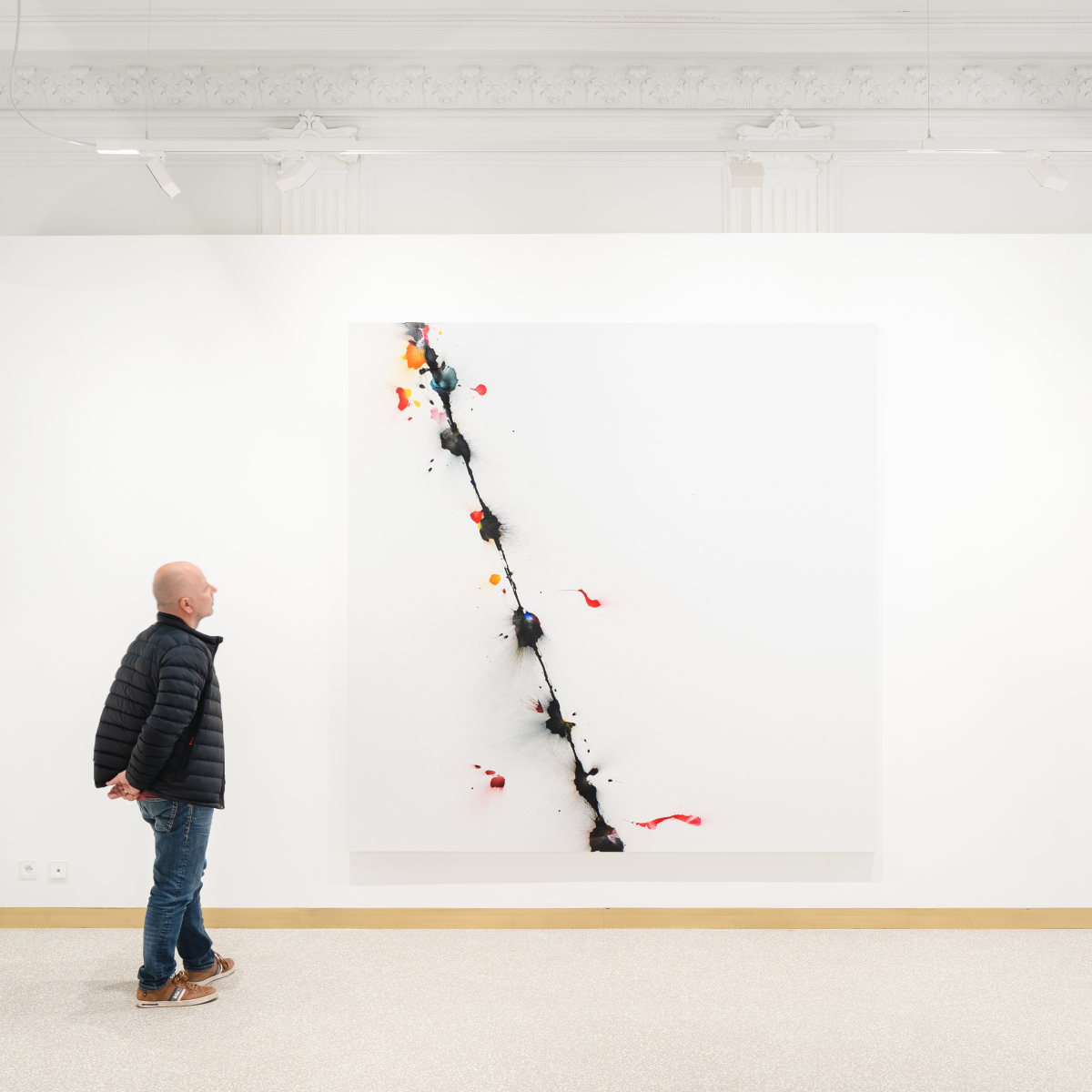 The works of the “sniper” series result from the pulverization of pictorial matter. Using an air “gun”, the artist literally shatters the colors he has previously laid on the canvas. Mere pulverized dots on the canvas surface at first, the “sniper” works then evolved towards blown up lines. Dolla started working on this series in 2019. For that purpose, he built a sort of suspended basket from which, while laying face down, he could direct the impact of his high-pressure air gun on the hips of paint he had laid out to form an often linear, directional composition. From this “suspended stretcher”, the artist set an initial trajectory with his body, a more or less rapidly executed black “trail-line”. Moving around in his basket, Dolla then placed the colors along this “trail-line” in a random yet controlled manner, although the basket only allowed him to move horizontally, requiring him to work blind.
Finally, Dolla went over the colored canvas one last time to violently blow up the hips of pictorial matter, which vaporized and spread over the immaculate canvas. The painter’s tool is always meaningful, and the artist waited for the right time, the kairos (critical moment) of desire when pulling the trigger.

The “fumées” series belongs to another line of Dolla’s work, although it is rooted in a conceptual process similar to the sniper’s. For this series, the artist made marks on freshly painted surfaces using the black smoke of a candle flame. This time, the smoke forced the artist to position himself below the canvas, in order for the volutes to imprint the canvas at specific places and parsimoniously cover the surface. Adding another, more autobiographical, dimension to this process, Dolla used a ladder as a mask, or negative stencil, in order for the smoke to spare the areas covered by the object while imprinting the rest of the canvas. This metallic ladder was the one Dolla used to climb to get to his mezzanine bedroom as a child.

In addition to its symbolic and memorial function, this object echoes History. Here, the child’s story collides with History. Born in 1945, Dolla was probably overdetermined by the atomic bombs the American dropped on Hiroshima and Nagasaki. The first observers noticed that the bomb lightning had bleached the concrete façades around. Human silhouettes were printed on the sidewalks, as well as a vertical ladder held by a standing man directly on the wall, like photographic negatives.

The “sniper” series consists of decorative blows from above, and the ”fumées” in the fixation of chromatic affects from below. These paintings made “from above” and “below” were then exhibited vertically, contrary to the spatial logic of their execution. The paintings are therefore “up end down”, a phrase Dolla twisted to make a double statement.
Of course, the ladder raises questions of scales and proportions every artist has to face and negotiate, but also of the impact of memory and the passing of time, which imbues objects from the past with an emotional charge, gradually turning them into emotional triggers. As for the “sniper” series, the violence they embody against the pictorial medium make them a resurgence of the Supports/Surfaces period with which Dolla has constantly been trying to part, while renewing the visual and conceptual approach of this foundational movement in his practice. His works will always be dialectically torn between the radicality of abstract painting on one hand, and the integration of ordinary and private life on the other.
In other words, Dolla’s work is doomed to be poetically pulled between the “pictorial subject” and the “social and political subject”.

However, Dolla’s irreverence toward the vocabulary of painting -up to shooting it- as well as his “fumées” series are not new. His latest works remarkably showed how the reuse of old processes, the memory of gestures, technique and practice, forms part of the creative process itself.

The Up end down exhibition proposes to open a dialogue between Dolla’s current work and his somehow more distant, yet contemporaneous and coherent older work presented in the form of quotes. The works here presented keep silently beautiful, and show nothing of the psychic meandering from which they emerged.